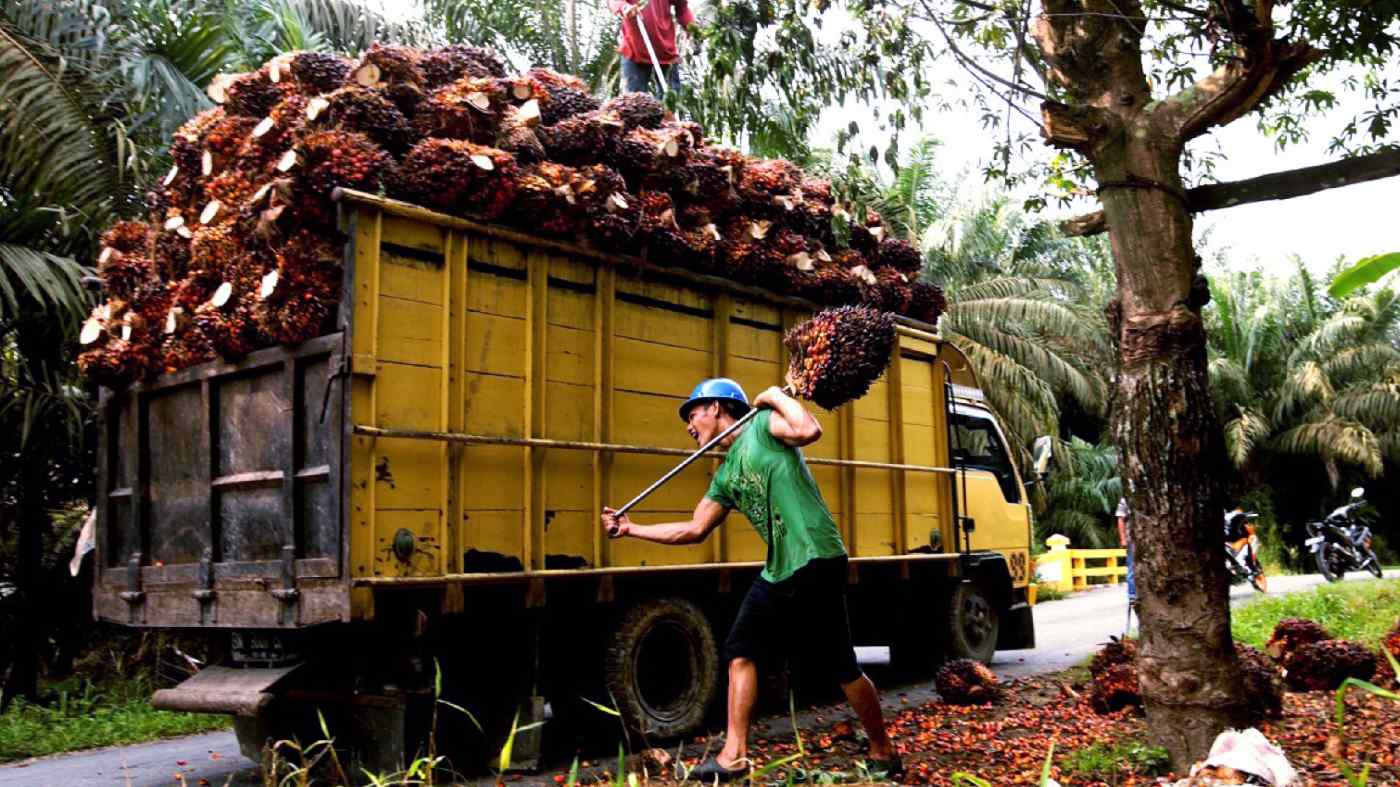 TOKYO -- Nine Japanese makers have declared that by the end of the year, all palm oil they use will be certified by the Roundtable on Sustainable Palm Oil, as international criticism against poor environmental practices at plantations and producers continues to grow.

Palm oil is found in a wide variety of food and daily-use products. The makers' pledge signals a step forward in their awareness about protecting the environment. However, most Japanese companies still mix conventional palm oil with RSPO-certified oil -- a blend that is anathema to many European companies.

This has not been lost on Japanese consumers, who are demanding better procurement policies.

Nissin Food cup noodle products have displayed RSPO's palm tree trademark since February. The label assures buyers that the noodles use at least some palm oil certified by the Malaysia-based nonprofit.

Manufacturers buy palm oil through trading houses and, until recently, have not paid much attention to conditions on plantations and in other parts of the supply chain. To obtain RSPO certification, palm oil producers need to do business with growers and mills that have been proven by the RSPO to be free from deforestation practices and child labor, among other concerns. The producers must manage all links in their supply chains as required by the organization.

This makes the cost of RSPO-certified oil about 10% higher than other oil, said an official at a manufacturer.

In 2015, only about 37 Japanese companies were using RSPO-labeled palm oil, compared with roughly 300 each in Britain and Germany. But the number has jumped to 221, due to strict procurement standards imposed on organizers of the 2020 Tokyo Olympic Games. Nissin's Cup Noodle displays the RSPO label, but the palm oil is a blend of certified and non-certified oil, as is the case with my Japanese products.

Japanese companies are catching up in this area, but the RSPO label on, for example, Nissin's noodles reads "mixed" -- a warning that certified oil has been adulterated with non-certified oil. The same label appears on many Japanese products.

But some companies in the country view the "mixed" designation as merely the first step toward use of only RSPO-certified oil. Of the 37 Japanese members, Lion and eight others plan to attain the goal by the end of the year.

Palm oil is everywhere; in food, detergents and even cosmetics. Morinaga chocolate-coated ice cream bars, Kao laundry detergent and Lion foaming hand soap are just a few examples of where the oil can be found. But despite being in about half of all products in supermarkets, it is referred to as the "invisible oil" because it is rarely mentioned on labels. It is estimated that annual per capita consumption of palm oil in Japan is 6 kg.

It is also cheap. On a same-sized plot of land, palm oil producers can get eight times more oil than their soybean oil counterparts. This is partly the reason why palm oil production accounts for nearly 40% of annual vegetable oil output -- about 70 million tons.

But its widespread production has drawn the ire of deforestation critics and child labor-rights advocates, especially at plantations in Indonesia and Malaysia, which combined account for more than 80% of global production. 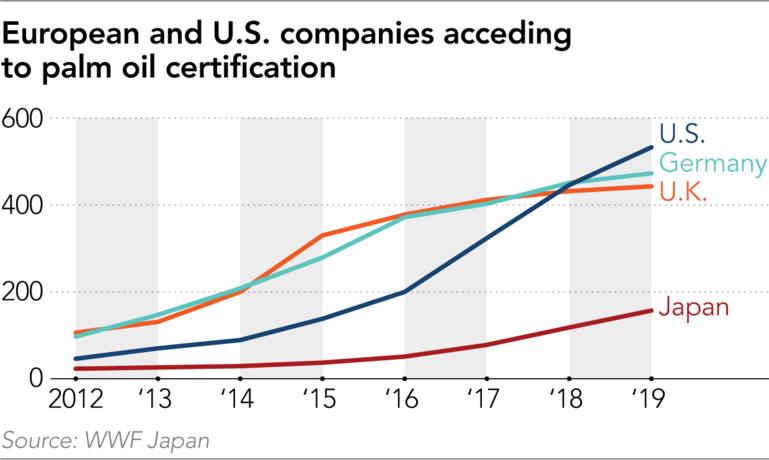 In 2010, Greenpeace released a video showing that palm oil used in Nestle's Kit Kat wafer bar contributed to deforestation and endangered the habitats of orangutans. The video led to a boycott of the popular candy.

Companies have come to fear the loss of investors and customers if they fail to address environmental concerns. This led to the founding of the RSPO in 2004 under the auspices of the World Wildlife Fund and Unilever, an Anglo-Dutch maker of consumer goods. Now, there is a stampede to procure RSPO-certified palm oil, which still only accounts for 20% of global production.

The RSPO has a number of ways to classify palm oil, based roughly on the integrity of supply chains. The two highest classifications result in either "identity preserved" or "segregation" certifications -- IP and SG, respectively. This means the oil can be traced back to certified supply bases. IP and SG are the oils most coveted in Europe.

The other two classifications -- "mass balance" and "book and claim" -- denote less desirable but more readily available oil. The former, or MB, denotes sustainable oil blended with ordinary palm oil somewhere in the supply chain. The latter, or B&C, is given to oil from supply chains that are not monitored for sustainability, coming from producers who purchase RSPO "credits" as a first step to achieving certification.

Japanese companies mostly use MB palm oil, which can entail transporting a mix of, say, 100 tons each of certified and uncertified oil that is mixed as needed to make products such as Nissin's noodles.

Lion is using MB oil as it transitions to certified oil for 100% of its needs by the end of the year, from 14% in 2019. "Mixing in uncertified oil is unavoidable as the amount of certified oil coming to Japan is limited," said Eiji Nishimura of Lion's CSV promotion office.

Companies in Japan imported 170,000 tons of certified palm oil in 2019 -- about 10-20% that of Germany, U.K. and U.S. companies. Certified oil imported by Belgium and German companies stood at 84% and 47%, respectively, compared with only 2% for Japanese companies, most of which rely on MB and B&C oil for 98% of their needs.

The Japan office of the Rainforest Action Network, a U.S.-based environmental organization, reminded Nissin in November that sources of MB oil cannot be traced, making it difficult to address producers' responsibility for deforestation and human rights violations.

Meanwhile, Ajinomoto has postponed its planned shift to 100% certified oil in 2020. The figure now stands at 25%, with most of the remainder being MB oil. The company hopes to use only certified oil but must be realistic in its approach, an official said.

Japan is "one lap behind" Europe as to the procurement of certified palm oil, as the continent is under closer scrutiny from NPOs and other concerned parties than Japan, according to Akiko Minami of World Wildlife Fund Japan.

Because European and U.S. companies started procuring certified palm oil ahead of others, they have established "deep ties" with suppliers and can secure the oil in high volumes, she said.

Starting in December, Kao will help small plantations in Indonesia improve work conditions and address other concerns. The company plans to spend 500 million yen ($4.8 million) on the project over the next ten years.

"We will use oil produced at plantations we support," said Masakazu Negoro, a managing executive officer at Kao. "We will establish a win-win relationship with them."

At present, only large producers have been certified by the RSPO. Most smaller ones, which are responsible for about 30% of global palm oil output, remain uncertified. In the future, Kao hopes to have about 5,000 small producers carrying either IP or SG certification.