TOKYO -- Japanese seafood companies have long been catching and buying fish for their products. But increasingly, they are farming their own fish as well in the hope of securing a more stable future.

Most of these efforts focus on raising bluefin tuna, a favorite in Japan, from eggs -- a hugely difficult process and long considered a pipe dream in the fish farming business. But three major seafood companies -- Maruha Nichiro, Kyokuyo and Nippon Suisan Kaisha -- are poised to start supplying a total of several tens of thousands of fully farm-grown bluefin tuna annually.

If all goes according to plan, Japanese consumers may find affordable bluefin in supermarkets as early as next year.

For its bluefin operations, Maruha Nichiro has chosen waters around Amami Oshima Island in Kagoshima Prefecture.

A cluster of 80-by-40-meter pens are located some 500 meters off the subtropical island. When food is thrown into a pen from a small boat, dark-blue and gray bluefin roil the surface as they swarm in for a bite. These are big creatures: nearly a meter long and weighing over 50kg. Two of the six pens operated by Amami Yogyo, a Maruha Nichiro unit, are for full farming. Currently, they hold 2- and 3-year-old tuna. Another pen is used to keep 5- to 11-year-old fish for harvesting eggs.

At another tuna farm operated by the company off the island, young tuna -- called fry -- measuring some 10cm long are being raised. They were transferred to offshore pens in August.

At this stage in the farming process, the fry need to be fed eight times a day. "It's hard work every day, including Saturdays and Sundays," said Takashi Yamamoto, chief of Amami Yogyo's Shinokawa branch.

Traditional tuna farming involves catching fry in the wild and raising them in pens. In full farming, fish are raised from eggs.

The latter approach is newer -- and far more difficult. It was not until 2002 that the world saw the first successful example of full bluefin farming, in a project carried out by Japan's Kindai University.

The technique has since been refined to the point where it can be used for commercial farming. But major fishery companies have yet to establish a system for stable supply, meaning low-cost bluefin is still just a dream for consumers.

As far back as 1987, Maruha Nichiro launched its project to raise bluefin tuna from eggs. Over two decades later, in 2010, it became the first private-sector company to pull off the feat.

The company began shipping fully farm-grown bluefin in 2015 under the Blue Crest brand. Its decadeslong efforts are finally paying off, with the business starting to take off.

Maruha Nichiro's major rivals are hot on its heels, though. Nippon Suisan plans to start shipping its fully farmed bluefin in winter 2017. Bluefin tuna feed in a farming pen, above, at Amami Yogyo's operations off Amami Oshima Island in Kagoshima Prefecture.

Also in the game is Kyokuyo. Working with Feed One, a major supplier of mixed feed products, it expect to start shipments in fiscal 2017 and supply 200 tons of fully farm-grown bluefin in fiscal 2018.

Hiroshi Furuhashi, head of Amami Yogyo, is confident about his company's techniques and know-how. "Even if there are industrial spies like in the semiconductor industry, it is hard to copy full farming of bluefin tuna," he said.

The challenges are many. For starters, it simply takes a long time to develop a commercially viable farming operation. Establishing a full cycle for complete farming of bluefin, starting with spawning, requires at least four years. Add to that another three years before shipments can begin. It is only at that point that the business can generate profits.

And even if the location meets all these conditions, raising bluefin is still hard. At Maruha Nichiro's facilities, only about 3% of eggs develop into fry large enough to be transferred to offshore pens. That is far smaller than the roughly 50% for farmed madai, or red sea bream. 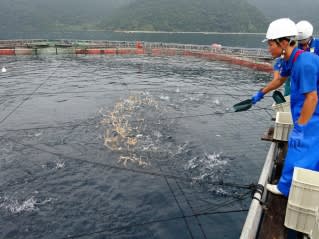 Bluefin fry need to be fed many times throughout the day.

Among the fry that do manage to get transferred, relatively few make it to the point where they can be shipped. All told, less than 1% of eggs eventually make it to the consumer.

All of these hurdles, however, also help Japanese suppliers. They enjoy a strong competitive advantage over companies that lack their technology and expertise for full bluefin farming.

Maruha Nichiro, which started shipping fully farmed bluefin before anyone else, has found a way to lower these hurdles. By using live food, it has been able to improve the survival ratio.

To secure a stable supply of parrot fish, the company has installed a pen for the fry. The timing of the egg-laying by the parrot fish is carefully adjusted so that the fry can be supplied to young bluefin.

Maruha Nichiro has also addressed a major cause of fry deaths -- nets -- by making nets more visible through large markings as well as by illuminating them at night.

Nippon Suisan, meanwhile, has boosted the survival ratio of its bluefin by developing a mixed feed composed of fish meal and fish oil.

Yoshihiro Uchiyama, president of Farm Choice, a supplier of mixed feed affiliated with Nippon Suisan, explained why the change to a softer feed helps. "Tuna has a habit of biting food before putting it into its mouth," he said. "Some bluefin spit out hard food."

Farm Choice's mixed feed for bluefin is also suitable for all sizes of fish. And because it can be stored when not in use, it is less labor-intensive than maintaining live feed.

Now that these companies have largely honed their basic farming techniques for bluefin, the focus of their competition is shifting to the taste and quality of the meat.

"We plan to conduct research on how to boost the quality through the type of feed used," said Tomoyuki Maebashi, an executive officer at Nippon Suisan.