TOKYO -- Spot prices for liquefied natural gas in Asia have been sluggish, falling to around $7 per million British thermal units, nearly equal to the prices of their European rivals. Spot prices of LNG in Asia have been tumbling since hitting a record high in February 2014.

Because of the "Asian premium," the practice of a number of Middle Eastern oil exporting countries of adopting different pricing formulas for crude oil exports to different regions, LNG prices have long remained higher than in Western countries. But now buyers hold the high ground in price negotiations, and some Middle Eastern gas producers are increasing exports to Europe.

Asian LNG spot prices tumbled nearly 70% after hitting a record high of $20 in February 2014. The difference with the National Balancing Point (NBP), Europe's benchmark gas price, was as large as $10 last year, but the NBP briefly topped its Asian rival in February this year. 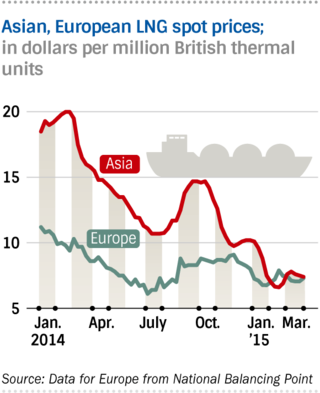 This year, new LNG supply is slated in the Asia-Pacific region: In Australia, several LNG projects will start operations in Gorgon, Western Australia, and other areas. There are also plans to increase LNG output in Indonesia. Gavin Thompson, an analyst at Wood Mackenzie, a British research company, predicts that 12 million tons of LNG will be supplied annually.

Meanwhile, demand remains sluggish in Asian countries. With high levels of LNG inventories, Japanese electric power companies' appetite for procuring LNG on the spot market is weak. An LNG procurement official at a major power company said demand is weak during spring and industrial electricity demand is also falling short of the plan. The increase in the purchase of solar power-generated electricity is also affecting a decline in LNG demand, said an official at a major trading house.

The oil slump has prompted electric power companies to close new short-term contracts linked with oil prices. Many utilities have already procured electricity for the time being by closing one-year contracts, in anticipation of resuming nuclear power plant operations.

The slowdown in China's economic growth caused the country's LNG imports to decline by 9% from a year earlier in the first two months of this year. In South Korea, resuming nuclear power plant operations and other factors resulted in a nearly 20% fall in LNG imports from the previous year in January and February.

Due to slow demand in Asia, an excess supply of LNG is heading for Europe, prompting LNG imports in European countries, such as U.K., Belgium and Spain, to increase sharply. In an effort to support sales prices for Asia, Qatar is piling up LNG at receiving terminals in the U.K., in which the country has interest. 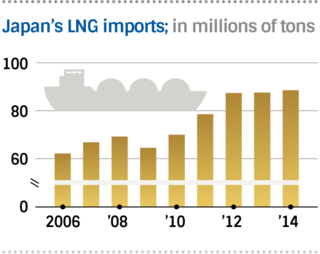 As a result, reexport from Europe to Asia drops to almost zero. Until last year, gas producers and major energy companies made margins by storing LNG at receiving terminals in Europe, and reselling for Asian countries at high prices. Without the "Asian premium," however, reexport has become less profitable.

Electric power companies are trying to take advantage of the shift in supply-demand structure to procure LNG at low costs. Meanwhile, traders who seek profit margins are having a tough time. A trader at a Western trading house said his business is slow because of lackluster spot transactions.

Many analysts expect LNG spot prices to decline further. Bank of America Merrill Lynch said in its report released on April 2 that oversupply could cause LNG spot prices to briefly fall below $6 in the second half of the year. Thompson of Wood Mackenzie also predicts LNG prices will rise to the $9 range during the summer, when the demand is high, but prices will fall to the $7 level again toward the second half of the year.

The decline in LNG prices will lead to lower procurement costs for electric power companies. In Japan, LNG accounts for more than 40% of electricity generated.

Toshihiro Nagahama, chief economist at the Dai-ichi Life Research Institute, estimates that if Japan's LNG procurement costs decline to the levels in Europe, the current annual power generation cost of 4.3 trillion yen ($35.4 billion) will decline by about 1.6 trillion yen.