Memory prices soar 60% from start of year amid virus crisis 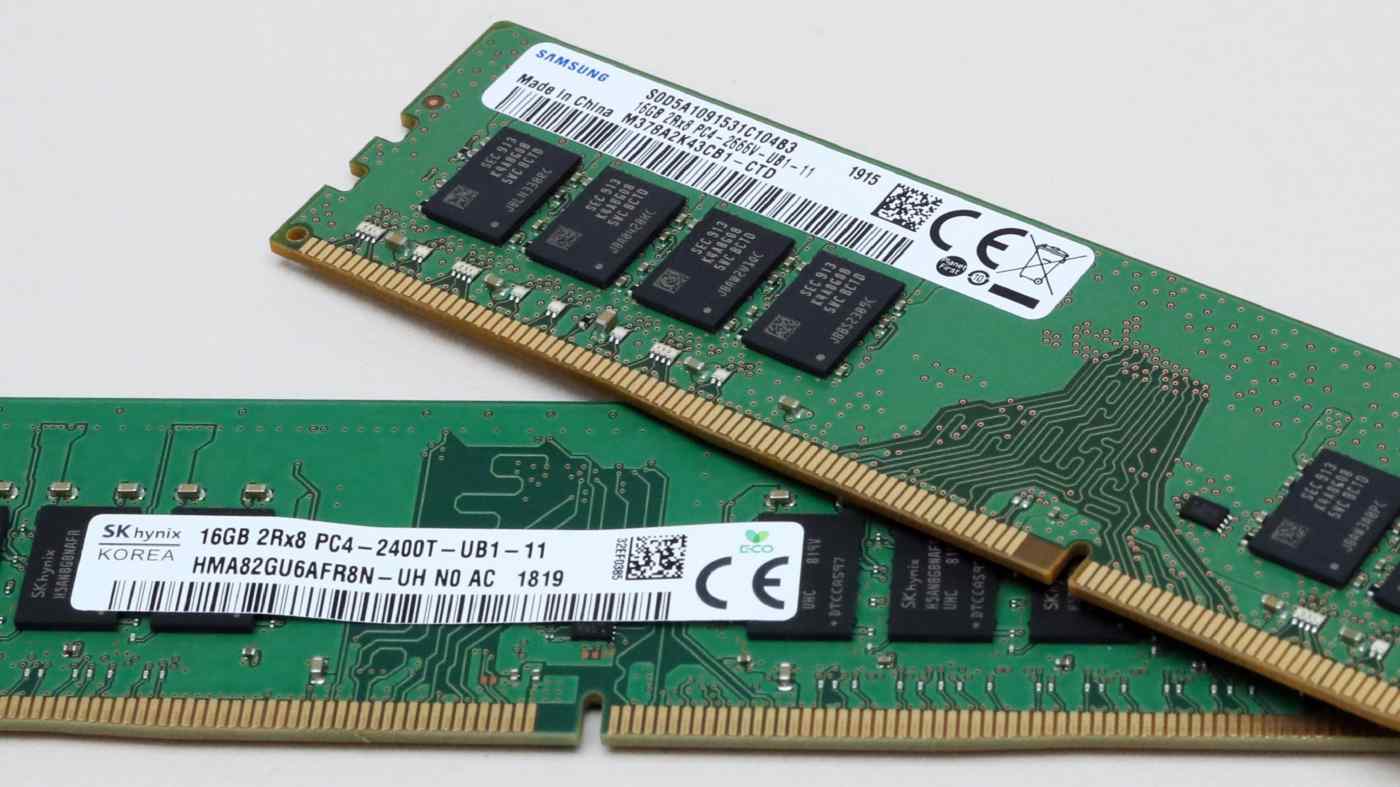 TOKYO -- Spot prices of dynamic random-access memory chips are rising sharply, with benchmark DRAM prices ascending around 60% since early this year to the highest since March 2019.

An unexpected increase in demand for semiconductors, triggered by booming sales of personal computers and other consumer electronics plus a rapid pickup in automobile production, is behind the soaring prices. Tight supply and demand for DRAMs resulting from U.S. trade sanctions on China is also contributing.

DRAM prices are expected to continue rising because the shortage is unlikely to be resolved anytime soon.

Small and midsize memory card makers and others who use DRAMs in small lots and keep minimal stocks are the main buyers on the spot market. Chips traded on a spot basis account for around 10% of the global market, and their prices are sensitive to the balance of supply and demand.

The median spot price of the benchmark DDR4 SDRAM 4-gigabit chips stood at around $2.68 as of Tuesday, up 60% from early this year. Prices have kept rising even with production resuming after the end of China's Lunar New Year holiday.

"If the current situation remains as it is, the production of printers will become impossible," an official at a trading house for semiconductors said in a desperate tone.

Demand for home printers is strong due to an increase in working from home amid the novel coronavirus crisis. But procuring the memory semiconductors, especially earlier-generation chips, that the printers use is difficult due to the chip shortage.

Printer manufacturers, which use memory chips in large numbers, normally hold price negotiations with suppliers on a quarterly or monthly basis. Recently, however, a semiconductor trading house official said, "They are starting to buy them on the spot market" to make up for procurement problems.

Rising DRAM prices reflect an unexpected imbalance between supply and demand as an effect of the COVID-19 pandemic. Demand for chips has grown more than expected because sales of PCs, smartphones and consumer electronics have been increasing due to widespread working from home. Starting last autumn, furthermore, auto production has been recovering sharply.

In addition, the U.S. has slapped an effective export ban on Semiconductor Manufacturing International Corp., China's biggest chip foundry, amid the trade war between the world's two largest economies. As the ban has prompted chip users to hold off new procurement from SMIC, orders have flooded to Taiwanese foundries such as Taiwan Semiconductor Manufacturing Co., (TSMC), the world's biggest foundry.

Due to industrywide horizontal divisions separating development and production, the semiconductor industry cannot boost production steeply to meet sudden surges in demand. As a result, the shortage of logic semiconductors, which are used for calculation, has become acute.

The shortage of DRAM memory chips did not seriously affect companies such as South Korea's Samsung Electronics and SK Hynix because they produce their own.

But the trend in the DRAM market, as a Japanese chipmaker official put it, "rapidly changed in February" because some Taiwanese manufacturers, which usually produce earlier-generation commodity semiconductors, began to prioritize custom chips and other highly profitable products. The change occurred because TSMC has been struggling to meet soaring demand.

As a result, supply has become unable to keep up with demand on the spot market.

Skyrocketing spot prices have also pushed up prices for large-lot users, which consume 90% of chips. The median OEM contract price of DDR4 SDRAM 4-gigabit chips was around $2.40 in February, up about 10% from the previous month.

"Procurement is given higher priority over prices" on the market, said an official at a trading house handling memory modules. Double booking of orders is thus appearing, he said.

Producing semiconductors takes about three months. While the tight balance between supply and demand is expected to continue for some time, "It may be loosened temporarily around June as a result of overproduction," a chip trading house official said.