TOKYO -- Spot prices for liquefied natural gas in Asian markets remain in the doldrums, hovering at levels more than 40% lower than their most recent high, seen in January.

While new LNG production projects go on stream one after another, demand in Japan, by far the world's biggest importer of the chilled gas, is weakening now that some nuclear power plants have gone back online.

LNG spot prices have been on the decline since January, when they soared to the upper-$9 range per million British thermal units due to the shutdown of a South Korean nuclear power plant and trouble at Australian LNG facilities.

As of early June, LNG spot prices were hovering in the mid-$5 range per million Btu.

If the LNG spot price slump sticks, it could put downward pressure on Japan's long-term LNG import contract prices when the deals are renewed.

In the Middle East, Saudi Arabia and several other countries recently severed diplomatic relations with Qatar, the world's biggest LNG exporter. They also took other measures, including banning Qatari ships from visiting their ports. 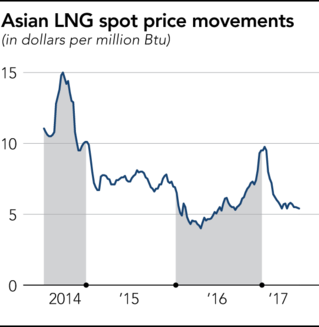 As things stand now, many analysts think that these tensions will not significantly or immediately impact Qatar's LNG exports. In fact, LNG spot prices show no sign of spiking.

Instead, concerns over a supply glut are weighing on prices. New production is coming online, a result of a raft of projects that broke ground around 2010, when commodity prices were high.

The massive Gorgon project, in Australia, commenced production last year; the Yamal project, in Russia, will do likewise by the end of this year.

By 2020, projects now under construction are expected to add more than 100 million tons of LNG  a year to market.

In addition, Qatar announced in April a decision to resume developing its North Field, the world's largest gas field. Production is not expected to begin for five or seven years. When it does, the North Field is seen boosting Qatar's annual LNG production capacity by 15 million tons.

There is a strong possibility that competition among gas-producing countries will further intensify as supply continues to outpace demand.

According to the International Gas Union, the world's gas nominal liquefaction capacity totaled 330 million tons in 2016, about 30% more than global demand. This excess supply will only expand further.

There is also at least one important demand-side factor behind stagnant LNG spot prices in Asian markets, which account for the bulk of the world's LNG imports. Resource-poor Japan is the world's biggest LNG importer, followed by South Korea and China.

The Takahama nuclear power plant's No. 3 unit became the latest to be brought back online, on June 6. Japanese electric power companies are large-lot LNG users. They already have LNG inventories built through long-term import contracts. "We do not see a strong need to buy more LNG on the spot market," a representative of a utility in eastern Japan said.

"There is a strong possibility that LNG spot prices will hover at relatively low levels in the medium term," said Kosho Tamura of the government-affiliated Japan Oil, Gas and Metals National Corp., or Jogmec.

Some analysts say that although emerging markets will need more and more LNG, it will take time for them to secure enough receiving facilities.

Global crude oil prices have recovered from a 2016 low, following an agreement between OPEC countries and major non-OPEC oil-producing countries to cut production.

The price of West Texas Intermediate, the U.S. benchmark crude also known as WTI, tumbled below $30 per barrel in February 2016 but has since bounced back to around $50 per barrel.

Japan imports the bulk of its LNG at prices linked to crude oil prices under long-term contracts. Japan's LNG import prices have now climbed to the mid-$7 range per million Btu, in tandem with rising oil prices.

If LNG spot prices stabilize at low levels, in Japan they will appear to be even cheaper comparatively. What will happen then?

Hiroshi Hashimoto of the government-affiliated Institute of Energy Economics, Japan, has an answer. "It is highly likely," he said, "that Japanese companies will consider either setting prices at levels close to spot prices when they renew long-term contracts or raising the percentage of LNG they procure on the spot market.