PARIS -- The global oil glut will continue this year, putting downward pressure on crude prices, according to the International Energy Agency.

In 2016, oil supply will outpace demand by as much as 1.1 million barrels per day, the IEA warned in its latest Medium-Term Oil Market Report released Monday.

"Only in 2017 will we finally see oil supply and demand aligned but the enormous stocks being accumulated will act as a dampener on the pace of recovery in oil prices when the market, having balanced, then starts to draw down those stocks," the report predicted.

Current market conditions do not show signs of any significant recovery in prices in the immediate future, the IEA said. 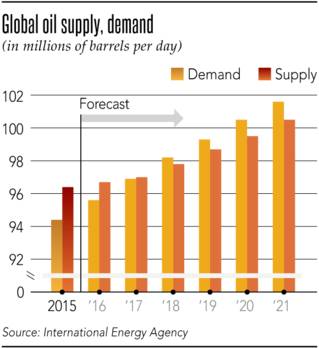 In 2015, global oil demand grew by 1.6 million barrels per day in what the IEA described as "one of the biggest increases in recent years." The rise was caused by the rapid fall in prices that stimulated consumption.

But production more than matched consumption and oil supply exceeded demand by 2 million barrels per day during the same year. The oversupply will remain throughout 2016, the report said, adding that even as the gap narrows in 2017, recovery in prices will be slow as stocks feed into the market.

Annual rates of growth in demand in the years up to 2021 are unlikely to rise above average 1.2 million barrels per day because of a global economic slowdown.

Despite the slow growth, global demand will top 100 million barrels per day at some point in 2019 or 2020, the IEA said.

Global investment in oil production plunged by 24% in 2015 and is expected to fall 17% in 2016. There is "hardly any spare production capacity other than in Saudi Arabia and Iran," the organization pointed out, stressing the importance of maintaining investment to prevent a significant oil demand increase from causing a destabilizing shortfall in supply.

The IEA regarded the deal as a sign of OPEC's determination to "maintain and expand their market share." But analysts have largely been skeptical. "It's a halfhearted agreement," said Tomomichi Akuta, senior economist at Mitsubishi UFJ Research and Consulting.

The agreement is not clear on many key issues, such as the stance toward Iran, and its impact on the market will be "neutral," said Takayuki Nogami, director of the Energy Research Division at Japan Oil, Gas and Metals National Corp.

But Nogami sees positives in the fact that major oil producing countries are acting in solidarity. With oil production in the U.S. beginning to fall, "there are signs of the supply-demand balance improving," said Nogami.

For the next three months, he predicts the prices fluctuating significantly between $25 and close to $50 per barrel.