TOKYO -- Global demand for paper is falling as business slows, schools close and telework grows amid the novel coronavirus pandemic.

Production of office print paper in developed countries crumpled by 20% to 30% year on year since spring, with some countries showing even steeper declines than during the 2008 financial crisis. The U.S. saw production decline 31.3% in April compared with an 11.6% drop in January-March, according to the Japan Paper Association.

"There are no signs of a pickup in demand even in July," an executive at a Japanese paper trading company said.

This was confirmed by U.S.-based research company RISI, which said production of coated and other printing paper products in the U.S. dove 30% to 40% in May.

Per capita consumption of paper and paperboard in the U.S. totaled 214.6 kg in 2018, the fifth-highest in the world. While global consumption in the year fell 3% from 2008, the U.S. logged a decline of 19% as a result of digitalization advancing faster than in other countries. This has forced U.S. paper manufacturers to halt operations or sharply reduce production. 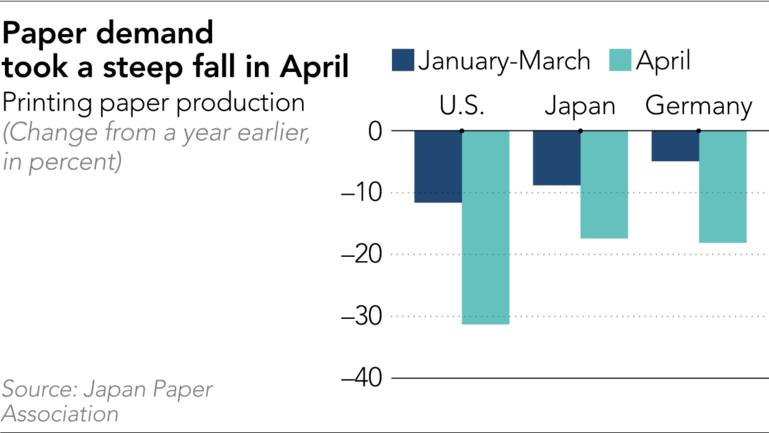 COVID-19 has "fueled sinking paper demand as more people work from home and schools close," said another Japanese trading house executive. Temporary or permanent closures of magazines and the general shift to digitalization have also crushed demand. Consumption of printing paper in the U.S. dropped 30% in the May-June period in comparison with a 20% fall at the time of the 2008 global financial crisis.

Production in Europe is also diving. Output in Germany -- Europe's biggest producer -- contracted 18.1% in April from a year earlier, down from a 4.9% decline in January-March. In the U.K., direct mail and other mailbox stuffing have completely stopped in some areas due to less advertising and far fewer delivery staff. The new normal includes more work and school from home and less meetups around the office printer. (Photo by Koji Uema)

Production is also reeling in China. The world's biggest paper and board producer has already been hammered by the trade war and the virus has made things worse. Exports of office paper are falling fast, as the new normal directs a shift to a paperless world.

Economic activity picked up faster in China than in other countries, feeding increased local demand for cardboard since April. But a recovery in office paper exports remains far off, according to a Japanese trading house. This has prompted some Chinese paper companies to shift new investments away from office paper and into tissues and other household paper products. 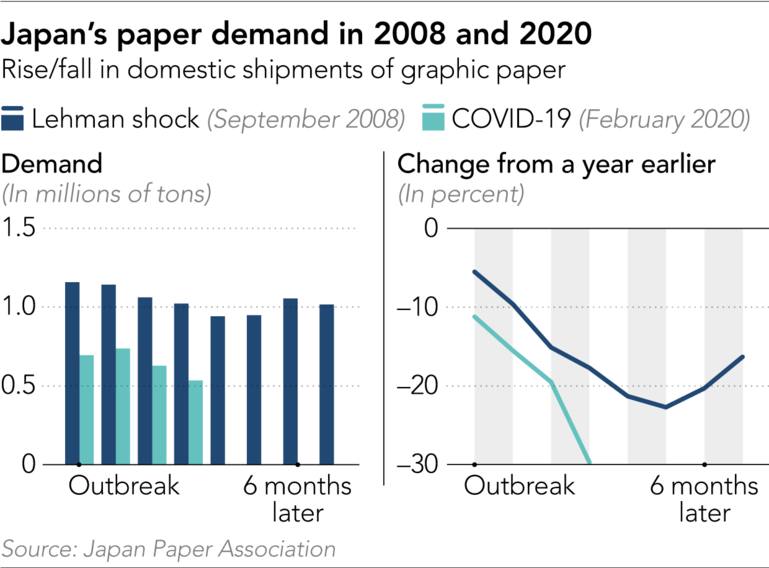 In Japan, the slump in demand exceeds that of the 2008 crisis. Although supermarkets and other retailers have resumed newspaper inserts since the coronavirus emergency declaration was lifted, demand for office print paper remains in the doldrums due to the rise of telework and cost reductions in key industry sectors.

"The domestic market for printing paper may not firm up from its current shrinkage of around 20%," an executive at a Japanese paper trading company said, noting that demand has never fully recovered from the 2008 crisis.

Effects of the pandemic are expected to continue even after the virus is controlled. "There will be neither a V-shaped nor U-shaped recovery in demand for printing paper," said Toru Nozawa, president of Nippon Paper Industries. "We are braced for a long L-shaped decline."