TOKYO -- International prices for just about every of rare metal used in the manufacture of home appliances and other high-tech products, have sunk to their lowest levels in about 10 years.

Reasons for the slide are not hard to find. A prolonged supply glut in China means supply far outstrips demand. Global players, however, appear to have few options, as the issue of swollen inventories in the world's leading rare-metals producer is unlikely to go away anytime soon. 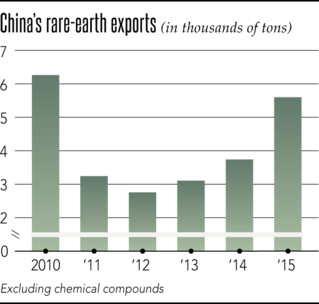 Of their own accord, Chinese producers have been talking about price cuts since the beginning of the year, said Nick Kotaki, managing director at Material Trading, a Tokyo-based trading company that specializes in rare-earth minerals and rare metals.

Until recently, the central government was a long-time buyer of inventories. China built up its annual rare-earth reserves of 10,000 tons for the third straight year in 2014, a figure accounting for 10% of global production. But the tactic, attempted again in 2015, failed. Companies drove up prices and Beijing refused to give in. As stocks go unsold, producers have had to begin selling at lower prices.

On a recent visit to a company in southern China, an executive at a Japanese magnet alloy maker was surprised to learn that twice the amount of resources had been extracted than was allowed under government regulations. The official was even more stunned by the reasons his Chinese counterpart offered: It is not illegal because the company pays the resource tax.

The tax system is there to protect the environment. However, it also benefits local governments, meaning tax collectors often turn a blind eye to excess mining. All this means it is not difficult for a company to slip through the central government's defenses, pushing down prices even further.

Neodymium, used in high-performance magnets, is trading around $51 per kilogram, while dysprosium is priced about $258 per kilogram, both of which dropped about 50% in the past year.

Taking advantage of low prices, China has stepped up its export drive. Last year, rare-earth exports, excluding chemical compounds, jumped 50% on the year to roughly 5,600 tons. Tumbling prices have also whetted buyers' appetite for rare metals. The U.S. has increased its imports of lanthanum, used as a catalyst in petroleum refining. Japan has done the same for its neodymium imports.

Buoyed by strong exports, Beijing gave the green light for the production of 52,500 tons of rare-earth elements for the six months through June, a figure unchanged from a year earlier. The decision puts rare earth production at unprecedentedly high levels, given that the threshold had already been raised in January 2015, when the cap on rare earth exports was scrapped. Yet the export campaign alone is not enough to divert excess supply.

Other rare metals are in the same boat.

Molybdenum, used in steelmaking, is trading at $5.55 per pound, its lowest level in about 13 years. Antimony, used as a fire-retardant, and indium, used in liquid crystal display screens, saw price cuts of 40-50% in the past year.

More worryingly, considerable stockpiles of rare metals are locked up in the warehouses of a metal exchange which went bankrupt last autumn. The amount of indium remaining is more than triple global demand, while the quantity of bismuth, used in solder, meets 100% of global demand. Concerns over clearing the massive inventory are not helping restore prices.

The controversial exchange suspended all trading last summer due to financing difficulties. In February, 16 people, including the head of the operation, were arrested on suspicion of fraud.

Shigeo Nakamura, president at Advanced Material Japan, a trading company specializing in rare metals, said that it will take years before the confusion is cleared up. Until then, he believes, the exchange's inventory will continue to draw attention and keep weighing down on prices.

Ultimately, prices will depend on which way the price-setting wind blows from China. For now, market players are struggling to see light at the end of the tunnel.