Rio Tinto offloads assets while the (coal) price is right

Miner jumps at chance to shift focus to iron ore, other resources SYDNEY -- Higher thermal coal prices have given Rio Tinto a prime opportunity to unload assets, as it shifts away from the black stuff.

In late January, the Anglo-Australian miner announced an agreement to sell subsidiary Coal & Allied Industries to the Australian unit of China's Yanzhou Coal Mining. Coal & Allied produces thermal coal for power generation; Rio Tinto said the deal is valued at up to $2.45 billion. 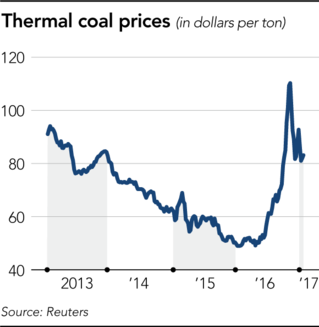 The purchase of Coal & Allied will give Yancoal Australia, the Yanzhou subsidiary, interests in large-scale thermal and semi-soft coal mines in the southeastern state of New South Wales: 67.6% of the Hunter Valley Operations, 80% of Mount Thorley and 55.6% of Warkworth.

In addition, Yancoal will obtain a 36.5% stake in a coal export terminal at the Port of Newcastle.

Thermal coal prices doubled in 2016 and, at one point, exceeded $100 per ton after China introduced domestic mining restrictions. The price has since stabilized at around $83 a ton. By seizing the moment, Rio Tinto stands to reap sufficient value for its assets while fulfilling its goal of paring debt, British research company Wood Mackenzie said.

The final purchase price will depend on how the Chinese group chooses to pay. One option involves a one-off cash payment of $2.35 billion by Feb. 24. Another entails an initial sum of $1.95 billion, followed by five years of installments totaling $500 million.

Yancoal is set to pay a 14% to 22% premium for the acquisition, according to Australia's Macquarie Bank. Given that Rio has tripled its assessment of the proven coal reserves at Hunter Valley Operations and increased its figure for Warkworth by 50%, Wood Mackenzie reckons the premium is reasonable.

An official at a trading company, though, said the terms are "favorable to Rio." Even after the sale, Rio will receive royalty payments for 10 years when the thermal coal price exceeds $75 per ton.

The two sides aim to complete the acquisition procedures during the latter half of 2017.

Rio wants to channel most of its capital into the iron ore business, along with copper and aluminum. Demand for these resources is expected to grow as China moves ahead with urban development projects. As a result, coal assets need to go.

Bloomberg reported that Rio has also accepted an acquisition proposal for coking coal assets -- worth and estimated $1.5 billion -- in Australia's northeastern state of Queensland.

As for Yancoal, the deal with Rio will change its business drastically, Chairman Li Xiyong said. The acquisition, he said, is an opportunity to gain world-class assets.

Yancoal could help Coal & Allied gain an edge over rival Glencore, the Swiss mining and trading company. Its parent, Yanzhou, runs coal and power generation businesses in China and Australia and aims to expand its overseas presence.

The purchase will make the company the fourth-largest coal producer in Australia. The combined annual output of the three mines came to 25.9 million tons in 2016, with Coal & Allied taking 17.1 million tons.

Mining at Hunter Valley Operations is expected to continue for another 46 years, while the other two mines are projected for another 19 years.

Aside from the tangible assets, Yancoal will absorb some of Rio's expertise on lowering mineral production costs. This could lead to better profit margins.