There are growing concerns that China's tire production might stagnate.   © Reuters

TOKYO -- Natural rubber prices are fluctuating wildly as the deadly outbreak of the new coronavirus that causes pneumonia spreads, especially in its epicenter Wuhan and elsewhere in China.

Natural rubber is essential to the production of auto tires. It is also widely used for industrial products such as hoses and belts. The recent turmoil in the commodity's market comes as China, the world's biggest auto market and second-largest economy after the U.S., is struggling to cope with the public health crisis.

Natural rubber futures prices tumbled amid growing concerns over sluggish auto sales in many countries due to an economic slowdown as well as over weaker demand from carmakers.

But concerns over a decline in natural rubber supplies from Southeast Asia, a major producing region, had triggered a spike in prices between last autumn and early January. Such concerns remain strong.

The recent volatility in the natural rubber futures market is likely to continue for the time being amid fears over the spread of the coronavirus outbreak and a supply decline. 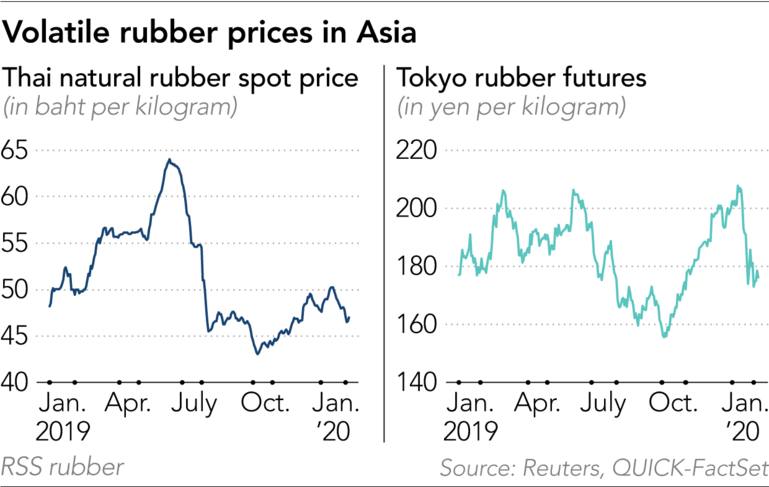 Ribbed smoked sheet, or RSS, rubber futures prices on the Tokyo Commodity Exchange, or Tocom, are one of international benchmarks.

On the Tocom, main forward month futures plunged to 173 yen per kilogram on Feb. 3, the lowest level in three months, or since early November 2019, and marking a decline of 34.8 yen, or 17%, from the most recent high recorded on Jan. 14.

Like in the case of other international commodities such as crude oil and nonferrous metals, the sharp fall in natural rubber futures was triggered by the rapidly spreading coronavirus outbreak.

China accounts for 40% of global consumption of natural rubber, which it uses primarily for auto tires.

There has been a delay in automakers' efforts to get their plants in China up and running again after the long Lunar New Year holiday due to the new coronavirus epidemic, with Japanese carmakers postponing the resumption of operations.

China has boosted its presence as an auto parts supply hub in recent years. A disruption to the country's auto parts exports could also lead to stagnant car production in various parts of the world.

South Korea's Hyundai Motor decided to cease operations of all its plants at three locations in the country in sequence from Feb. 4 as the supply of parts from China has been disrupted.

If Japanese and Western carmakers' parts procurement is also affected, demand for tires to be installed on new vehicles is likely to weaken further.

If the economies of many countries slow down further due to factors such as the manufacturing industry turmoil and the cooling tourism industry, damping consumer sentiment, auto sales there will become even more sluggish.

This prospect also helped trigger a sell-off in the natural rubber futures market.

"If the auto industry's stagnation is extended for a long period of time and become serious, weak prices will continue for between half a year and a year," said Shinichi Kato, president of Shinichi Kato Office, a Chuo Ward, Tokyo-based trading company specializing in rubber. 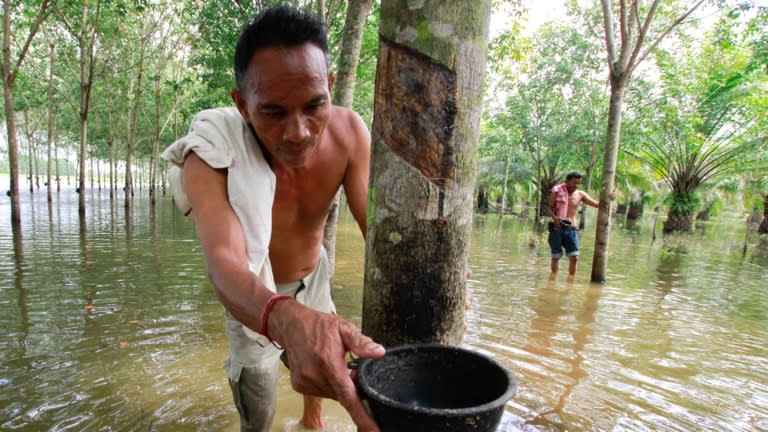 A rubber tree farmer adjusts a collecting cup at his flooded plantation in southern Thailand.   © Reuters

However, natural rubber prices had surged to a two-year high before plunging, as fears of a supply decline grew amid the spreading damage to rubber plantations from fungal disease in Southeast Asia.

As a result, rubber trees that produce the equivalent of just under 10% of global production in the three Southeast Asian countries appear to have been affected.

If rubber trees are infected with fungal disease, their leaves fall and photosynthesis becomes impossible, resulting in them bleeding less sap, a raw material for natural rubber.

The damage from fungal disease that spread through Southeast Asia's natural rubber-producing regions triggered a rally in prices last autumn.

According to the International Rubber Study Group, Thailand is the biggest supplier of natural rubber with an annual production of 5.15 million tons, which equals 37% of global supply. Indonesia accounts for 25%, followed by Vietnam (8%) and China (6%).

The natural rubber-producing regions usually have a dry season between February and April. Natural rubber production tends to decline during the period. There are also lingering concerns that production might be disrupted in April and beyond due to the impact of rubber trees' disease.

In fact, natural rubber prices on Thailand's spot market, which tend to reflect the current supply and demand environment, stood at 46.5 baht per kilogram on Feb. 4, a relatively small decline of 7% from the most recent high.

"The situation has been harsh for farmers in the past two years (when prices have remained mired in the doldrums) and a switch to other things such as coffee has proceeded," said Vo Van Thanh, chairman of VRG Japan Rubber Export, a natural rubber sales company in Vietnam.

Will the impact of the new coronavirus spread further? Or will a decline in supplies from Southeast Asia's natural rubber-producing regions take shape? Natural rubber futures prices are likely to be beset by two "illnesses" for the time being.