Russia has been a leading wood exporter since it was part of the former Soviet Union.   © Reuters
YOHEI ISHIKAWA, Nikkei staff writerNovember 11, 2019 00:09 JST | Russia, Caucasus
CopyCopied

MOSCOW -- Russia plans to use its commodities exchange to boost exports of wood and steel scrap to meet growing Asian demand, as it tries to wield more influence over pricing in international commodity markets.

The country will create a system that allows foreign companies to use the Saint Petersburg International Mercantile Exchange, or SPIMEX, to buy the two commodities, as well as clear customs and ship them to home markets, SPIMEX CEO Aleksei Rybnikov told Nikkei.

The new system is planned to start operation sometime in 2020.

SPIMEX, the country's biggest exchange, is waiting for government approval to begin trading steel and nonferrous metal scrap. Russia exports crude steel, but experts say the country's opaque pricing for scrap, which is sold through different channels, has hindered its export.

The government is also thinking about requiring some wood exports to go through SPIMEX, as transactions for these commodities bound for international markets like China -- the top importer -- are made directly between companies. This makes pricing far from transparent.

Moscow hopes that by following the example of North America and selling wood through a commodities exchange, where pricing is transparent, exports will rise.

Founded in 2008, Moscow-based SPIMEX is where domestic investors trade in petroleum products, natural gas and other commodities. Foreign companies were directly allowed onto the exchange in 2016.

The new system will link the electronic payment and shipping systems of SPIMEX in cooperation with the governments of Primorsky and other regions, where most wood comes from. It will also connect with the country's customs offices to simplify export procedures.

Details will be decided by early 2020, including whether the settlement currency will be in Russian rubles, U.S. dollars or other currencies.

Demand for wood used in construction is growing in Asia, and Russia is the world's second-largest wood exporter behind Canada. According to news agency Interfax, the country's wood exports topped $11 billion in 2018, easily surpassing the $9 billion of the previous year. 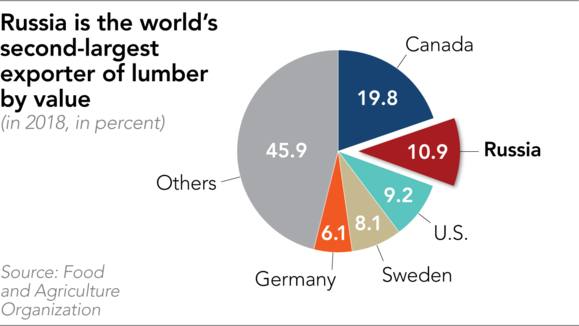 Russia has been a leading wood exporter since the days of the former Soviet Union. But as the volume of raw timber has declined, the country has been turning to exports of high value-added products, including lumber and plywood in recent years.

China is the biggest importer of Russian wood, but other Asian countries, including Japan and South Korea, also rank as top customers.

SPIMEX's Rybnikov said Russia has been largely unable to affect international commodity pricing, despite being a major producer of oil and natural gas. He hinted that the exchange will consider participating in the pricing for wood and steel scraps as well as other commodities.

Rybnikov added that he hopes Japanese companies will trade on SPIMEX, either directly or through Russian companies.

"It's good that SPIMEX is ready to improve its export market while maintaining transparency and legitimacy," said a representative of a Japanese wood import association. But he warned it will be difficult for the Russian exchange, which does not have a huge domestic market, to exert much of an influence on international pricing.