Despite volatility brought on by speculators, some analysts are bullish on silver: The metal is used in solar panels, demand for which is expected to rise amid a switch to green energy.   © Reuters
RURIKA IMAHASHI, Nikkei staff writerFebruary 4, 2021 12:00 JST | Japan
CopyCopied

TOKYO -- Silver prices slipped from an eight-year high this week, as retail investors jumped into the precious metal and tried to make waves in a relatively small market.

The price jump was set off by U.S. retail investors, many of whom are active on a Reddit group called "WallStreetBets." The group, with around 6 million members, has driven up the share price of U.S. video game retailer GameStop sixteenfold so far this year by betting against professional short sellers on Wall Street.

"It's like a swarm of locusts," said precious metal market analyst Koichiro Kamei. "Even if each one is small, they have tremendous destructive power when combined."

Why did silver catch the day traders' eye? Kamei pointed out that their targets, including GameStop and U.S.-based movie theater operator AMC Entertainment Holdings, have something in common: relatively low liquidity and prices. This lets retail investors, who often have less firepower than hedge funds, dabble in speculation. 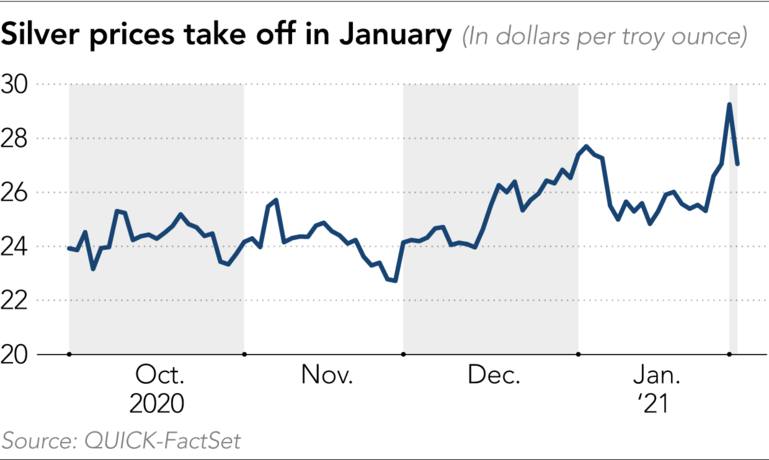 On Jan. 8, 194,336 silver contracts were traded on the New York futures market. On the same day, gold's trading volume was 517,610 contracts. Silver is also much cheaper. Gold currently trades at a price of around $1,840 per ounce, 68 times higher than silver.

In the U.S., in particular, silver is often called "the poor man's gold," as it is the most common precious metal accepted by the general public.

The emergence of day traders on Reddit has been tied to the COVID-19 pandemic. Because people are stuck at home and have fewer opportunities to spend money, they are more likely to have extra disposable income, which they can invest via smartphone apps such as Robinhood, said market analyst Itsuo Toshima.

But regulators have moved quickly to cool the overheated silver market. On Monday, the U.S. Commodity Futures Trading Commission issued a statement saying it was "closely monitoring recent activity in the silver markets."

On Tuesday, CME Group, operator of the Commodity Exchange, raised silver margin-trading requirements by 18%, dealing a blow to the day traders.

Despite the speculative price surge and subsequent decline, some remain bullish on silver. "We stress that our core view on silver remains the same," Goldman Sachs said in a report published Tuesday. The investment bank added that it expects silver prices to touch $30 or $33 per ounce "if an aggressive solar push is confirmed by the Biden administration."

Silver is used in solar panels. As countries move to greener forms of energy, demand for solar panels is expected to grow.

"What this silver squeeze taught us is that mass traders have such power," said precious metal analyst Kamei. "We should carefully monitor the situation, as they will keep looking for easy markets to dabble in, whether it's commodities or something else."