Smartphone memory chips are on a healthy price drop

Flash memory is entering a correction, experts say, and it's all part of a larger cycle

TOKYO Prices of flash memory chips have dropped by about 10% in three months, triggering worries that a correction is coming to the global semiconductor industry despite a general rise in the overall market.

Most of this fall comes from Apple halving the output of the iPhone X in the January-March quarter, and from the slowing growth of Chinese smartphone makers such as Oppo and Vivo.

Bullish semiconductor production equipment makers in Japan say the industry is entering a "supercycle," moving beyond the so-called silicon cycle, in which the sector goes from boom to bust every three to five years.

Chip demand is expected to grow, not only for smartphones but also household appliances. And as investment in base stations for 5G mobile networks gets into full swing in the second half of 2018, demand for data center servers will grow.

Apple started equipping iPhones with high-capacity flash memory in 2016. This sparked a race for higher memory capacity among smartphone makers and drove up spot prices of such chips. But this uptrend in spot prices appears to have ended.

Worldwide smartphone shipments shrank 0.1% on the year to 1.47 billion units in 2017, according to U.S. research company IDC.

In response to weaker demand, Samsung Electronics has decided to switch to making DRAMs on certain lines at a newly opened flash memory plant near Seoul. JPMorgan Securities Japan sees Samsung's capital investment in the flash memory business decreasing 30% on the year in 2018. The trend could become a concern for production equipment manufacturers, which are counting on further earnings growth for fiscal 2018, which runs to March 31, 2019.

The Japanese precision tool maker Disco said in early February that it logged a group operating profit of 40.1 billion yen ($366 million) for the first three quarters of the current business year, up 91% from a year earlier, thanks to strong demand. For fiscal 2018, the company revised its profit projection to 50.1 billion yen, up 60% from its previous outlook.

"We cannot think of any factor that will weaken the semiconductor market," Hitoshi Mizorogi, Disco's chairman, told reporters in Tokyo. "Favorable conditions will continue into fiscal 2018 as demand for memory chips applicable to data centers will further increase." 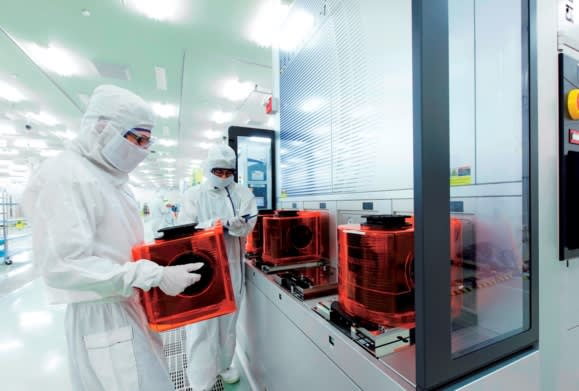 Tokyo Electron posted a consolidated operating profit of 181.4 billion yen in the nine months to end December, up 92%.

Tokyo Electron said on Jan. 30 that it posted a consolidated operating profit of 181.4 billion yen for the nine months through December, up 92%. Advantest, which makes semiconductor test equipment, logged 10.6 billion yen in group operating profit for the same period, up 14.6%, and upgraded its profit projection for fiscal 2018.

The correction period might prove to be a blessing. The fall in chip prices of 3-D NAND chips, which are difficult to mass-produce, could help expand the market and speed the shift from hard-disk drives to data servers, said Tokyo Electron President Toshiki Kawai.

"We don't expect a fall in demand at all in 2018," Advantest President Yoshiaki Yoshida said, predicting that adjustments to smartphone production in China will come to an end after January-March, followed by a steep increase in demand.

The semiconductor market has expanded for six years straight. According to SEMI, the market is expected to grow 7.5% in 2018 from last year, amid steady investment to increase the production of memory chips.