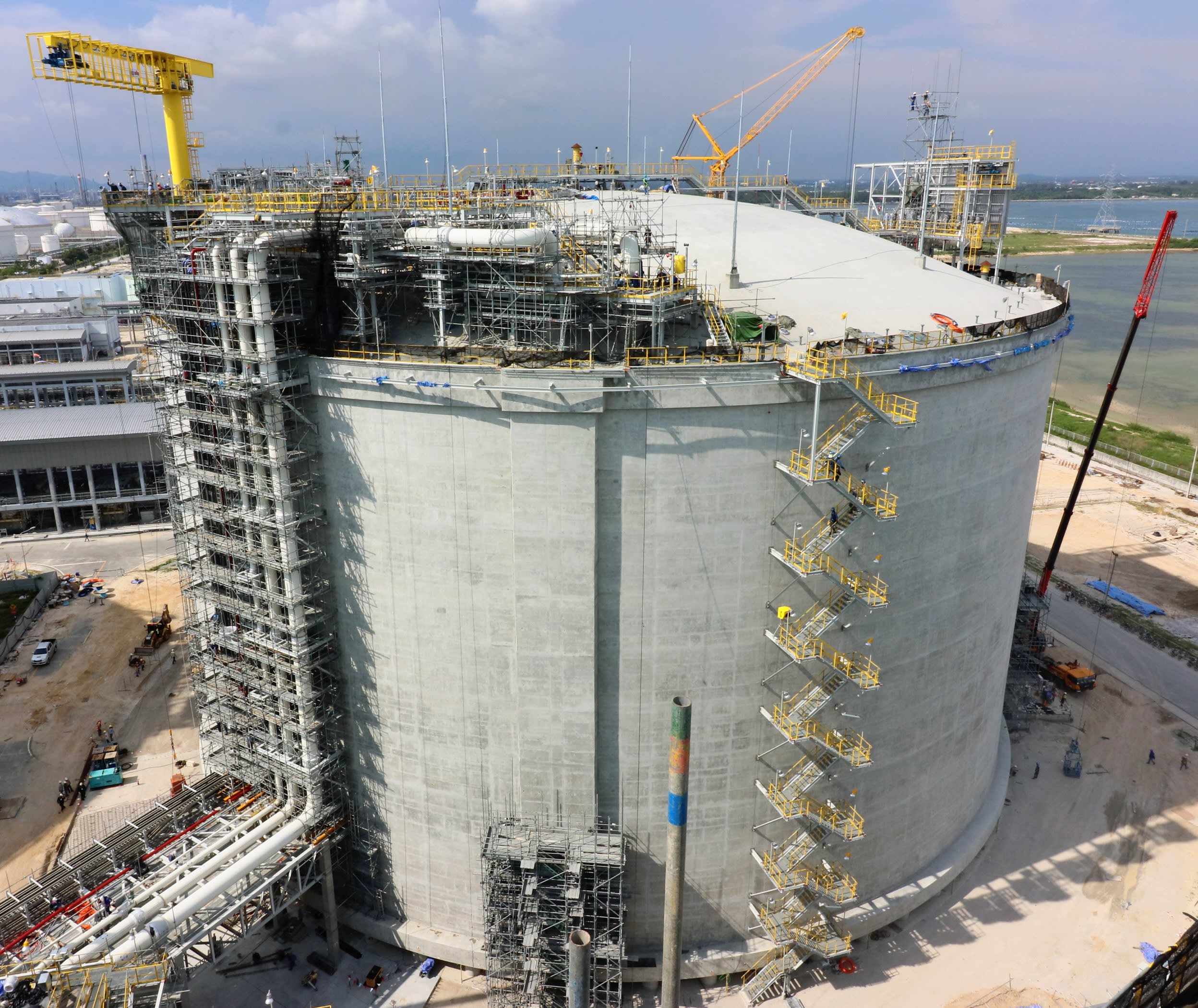 In Map Ta Phut, a town on the Gulf of Thailand in the country's Rayong Province, expansion work is nearly finished on an LNG import terminal owned by PTT, Thailand's state-owned oil company. The contractor for the project, a consortium of Japan's IHI and South Korea's Posco Engineering, aims to have the new facilities up and running by next March. New docks for transport ships have been added, and two massive storage tanks are almost complete.

When finished, capacity at the import terminal in Map Ta Phut will double to 10 million tons per annum. The fuel will be stored in liquid form at about -160 C, then converted back into gas and transported to power plants, industrial parks and other users by pipeline.

DWINDLING RESERVES Thailand relies on natural gas for 60% of its electricity. Much of that fuel is produced domestically. With gas reserves declining and demand for power on the rise, the country is trying to meet more of its energy needs from renewable sources. But even if all goes according to plan, gas will still provide around 40% of Thailand's electricity needs, meaning more LNG will have to come from abroad. PTT will soon sign 15-year supply contracts with affiliates of Royal Dutch Shell and BP to make use of its expanded import capacity.

Indonesia, a major resource exporter in Southeast Asia, may also start importing LNG by 2019 if no new oil fields are developed, according to an official at the Ministry of Energy and Mineral Resources. Domestic oil and gas output will soon fall short of the country's energy needs, and the official said Indonesia could become a net importer of LNG by 2030.

State-owned energy producer Pertamina is adding two LNG import terminals to its network, including one in Central Java Province. These will raise the company's annual import capacity to more than 14 million tons. The company also plans to build nine or so additional small terminals. President Joko Widodo's administration plans to construct power plants with a total generating capacity of 35,000 megawatts over the period from 2015 to 2019, which will sharply increase demand for gas.

Vietnam, which relies on coal-fired power plants for about 40% of its electricity, has also begun switching to gas due to declining coal production and environmental concerns. PetroVietnam Gas is building the country's first LNG terminal at the southern port of Thi Vai for $286 million. The terminal, which will be able to handle 1 million tons of LNG a year, is expected to be completed as early as 2019. The company is planning a second LNG import terminal, at Son My in the southern province of Binh Thuan.

There is concern about electricity shortages in Vietnam, whose economy is growing by around 6% a year. Moreover, pollution from a Taiwanese-owned factory in the central province of Ha Tinh has sparked complaints from residents and greater interest in LNG, which is seen as cleaner than other forms of energy. Singapore wants to be able to process more LNG than it needs for itself. Singapore LNG is working to boost capacity at a terminal on Jurong Island by 80% to 11 million tons by 2017. Additional construction could bring that to 15 million tons in the future. The city-state aims to become a regional gas trading hub, with the Singapore Exchange having introduced LNG futures contracts in January.

"Our starting position was meeting our needs, but clearly there is a need in immediate neighbors in Southeast Asia and other Asian countries," said S. Iswaran, the country's minister for trade and industry, adding that because "Asia is a net energy consumer and big consumer of LNG, it is essential that we have mechanisms that allow better price discovery for consumers." Futures trading is expected to allow for "greater transparency, and therefore better decision-making for gas buyers, [which] will make a big difference," he said.

LOOKING UP Global investment in LNG development has slowed along with cooling Chinese demand, but the picture has been improving recently. An earthquake in September forced South Korea to suspend operations at four nuclear reactors. To compensate for the energy gap, the country is procuring more LNG, according to research company S&P Global Platts. China, meanwhile, is importing more LNG since it is seen as a comparatively cheaper energy source than liquefied petroleum gas and other fossil fuels, said Simon Flowers at energy consultancy Wood Mackenzie.

In late November, East Asian spot prices for LNG climbed above $7 per million British thermal units, a level last reached in December 2015. The commodity has soared by more than 70% from the low reached this April.

Demand is expected to continue rising over the long term, particularly in Southeast Asia. Thailand, Singapore and Malaysia imported around 5.8 million tons of LNG in 2015, according to Howard Rogers, senior research fellow at the Oxford Institute for Energy Studies. This is around 2.4% of the total traded globally. By 2021, these countries, plus Vietnam, are expected to import around 20 million tons of LNG, rising to between 45 million and 65 million tons in 2030, when Indonesia is added to the mix.

Comparing the median values of Rogers' high- and low-case forecasts for each country, Japan is expected to remain the world's top LNG importer for some time, requiring around 74 trillion tons in 2030. At 66 million tons, China will likely be No. 2. Southeast Asian companies may work with Japan to procure gas from producers in the Middle East and elsewhere.

Japanese and South Korean companies with expertise in constructing and operating LNG terminals are upbeat about their prospects in Southeast Asia. "Japanese companies that have gained a lot of experience in their home country, the world's largest LNG importer, have ample competitiveness," said Moriki Hata, a site manager for IHI at Map Ta Phut. Tokyo Gas wants to help build terminals for PetroVietnam Gas and Pertamina. The company will offer technologies for the efficient use of LNG to manufacturers and other end users, and help local energy giants recoup their investments in the terminals quickly.

The Middle East and Australia, big producers that have come under pressure from higher U.S. output, would surely welcome a big new market in Southeast Asia.