A woman works in a rubber plantation in Yala province, southern Thailand.   © Reuters

TOKYO -- A fungal disease that has ripped through Southeast Asia's rubber plantations is pushing up prices and threatening mid- to long-term supplies of the indispensable material for vehicle tires.

As is so often the case, the U.S.-China trade conflict is part of the story. Rubber prices had fallen in part due to fears that the dispute would lead to reduced demand. Now, signs of progress toward a Beijing-Washington deal are contributing to the price uptrend, along with concerns over the fungus.

Some even see the trade war as an indirect factor behind the spread of the disease itself.

In Indonesia, 382,000 hectares of its 3 million hectares of rubber plantations were afflicted as of Oct. 1, according to the International Tripartite Rubber Council. The council represents Indonesia as well as Thailand and Malaysia, both of which have also confirmed cases of the disease, called Pestalotiopsis.

Infected trees fail to photosynthesize due to defoliation, decreasing their production of milk -- the raw material of natural rubber. All told, trees accounting for nearly 10% of the world's rubber production are estimated to have been damaged. 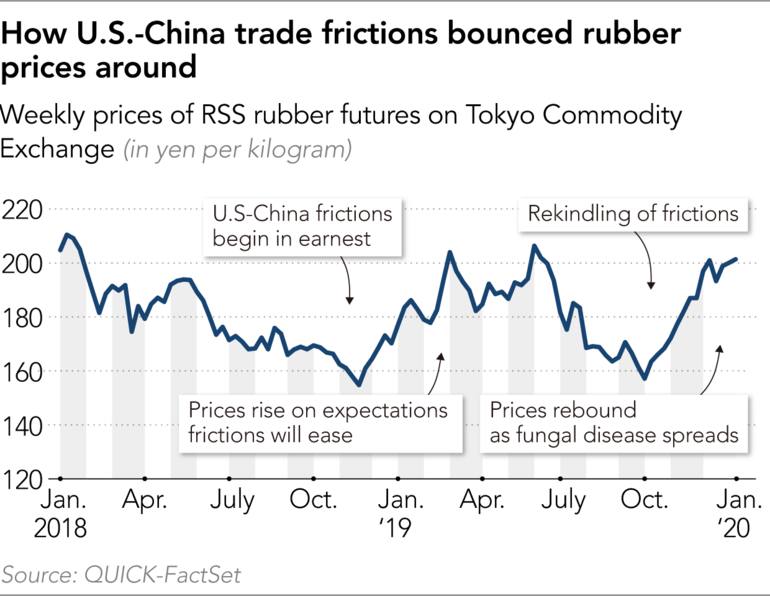 The effects are showing up in the market. Ribbed smoked sheet, or RSS, rubber futures on the Tokyo Commodity Exchange -- an international benchmark for natural rubber trading -- bottomed out at about 155 yen ($1.40) per kilogram last October. The price has since risen to hover around a 10-month high of 208.2 yen ($1.89).

While the outbreak is a natural phenomenon, Shinichi Kato, who runs an eponymous rubber trading house in Tokyo, said, "The disease could have been avoided."

Fears over weak demand sent RSS futures in Tokyo to a 27-month low of 152.9 yen at one point in late November 2018. In Thailand, natural rubber dropped to the 44 baht ($1.45) level per kilogram, lower than the estimated production cost of 50 baht.

Discouraged by the price slump, some rubber farmers in autumn 2018 began neglecting their trees and diverting their energies to other crops such as palm, market insiders say. The consequences started to become clear in summer 2019, when the fungus began to spread, constraining production.

Without the trade war, perhaps, none of this would have happened.

Looking forward, supplies of natural rubber will depend on whether damaged trees sprout new buds around April. If they do not, they will have to be replaced with new ones. It usually takes six to seven years from the time a rubber tree is planted to when it can produce milk on a commercial basis.

If all trees infected in 2019 are replaced, nearly 10% of global rubber production will be lost until the second half of the 2020s.

This would be bad news for the auto industry. AlixPartners, a U.S. consulting firm, estimates that the global auto market will expand at an average rate of 1.6% per year from 2019 to 2026. Although new car sales have been in decline due to an economic slowdown, "demand for natural rubber for auto tires will surely keep growing in the medium to long run," said Hideshi Matsunaga, an analyst at Sunward Trading in Tokyo.

As the market anxiously waits for April, the trader Kato thinks the situation is instructive.

"The recent series of problems should be taken as a lesson for establishing a sustainable production system," he said.