Market expects benchmark price to reach beyond the $6,500 mark

Workers picket just outside the Escondida mine, in Chile. Their strike is expected to be a long one.   © Reuters
February 14, 2017 16:00 JST | Japan
CopyCopied

TOKYO -- International copper prices are surging on widespread concerns over supply shortages as a strike and export ban affect the market. 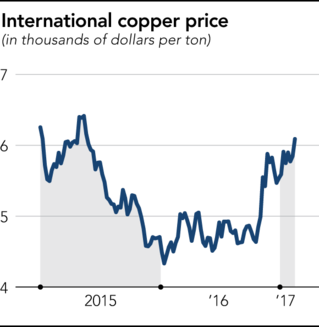 This is rare; only twice in 2016 did the price break through the $6,000 barrier. Once it hit that mark again on Friday, it kept accelerating.

Prices around the world have followed and could work their way into final product prices.

One factor pushing copper higher is a strike at the world's largest copper mine, in Chile, which accounts for 6% of global production.

When workers at the Escondida mine went on strike on Thursday local time, market participants thought the walkout might last a few days, like previous strikes, and the impact would be limited.

However, the mine's operator, BHP Billiton, later declared force majeure -- an unforeseen circumstance that prevents a party from fulfilling contractual obligations -- and said it will not be able to make planned shipments of the metal.

This triggered speculation that the strike could be prolonged.

Meanwhile, the world's second largest copper mine, in Indonesia, is another source of concern. The country's government on Jan. 12 banned exports of unprocessed copper ore, which it previously had permitted under certain conditions.

With the ban still in place, the mine's operator is hinting at possible production and manpower cuts.

Copper is used in a wide range of products across industries. Because its price can be used to take the global economy's temperature, so to speak, it is often referred to as "Doctor Copper."

Since the beginning of this year, the price of copper had been taking a moderate upturn as the global economic outlook improved. Now the possibility that supplies could fall short is pushing up the price and attracting speculators' money.

The market sees copper prices shooting past the $6,500 range, according to Takayuki Honma of Sumitomo Corporation Global Research.