Spot prices for cobalt in Europe are near three-year lows as new sources of supply have come on stream faster than demand has risen.   © Reuters
HIROKI MASUDA, Nikkei staff writerAugust 14, 2019 15:14 JST | China
CopyCopied

TOKYO -- Prices for rare-earth metals are falling sharply, with the price of cobalt dropping 30% since the start of the year, and that for lithium remaining sluggish.

Global markets are swimming in rare earths, as production has outstripped demand for the batteries used to power electric vehicles. Speculation is rife that demand for the commodities will slow further as China considers promoting production of hybrid cars, which require fewer rare earths. This is further stifling market sentiment.

Cobalt and lithium are mainly used to make cathodes for lithium-ion batteries used in electric cars. Spot prices for cobalt in Europe are near three-year lows.

Benchmark lithium carbonate trades for around 70,500 yuan ($9,970) per ton in China, hitting its lowest point in over three and a half years and down 59% from its recent high in November 2017.

Demand for rare earths has grown rapidly since 2017, as markets foresaw increased demand for EV batteries. Supplies tightened due to speculative buying, causing prices to jump.

IHS Markit. a U.K. research specialist, estimates that about 2.94 million electric cars will be produced globally in 2020, up more than 90% compared with 2018.

But output of rare earths has risen even faster than demand, for the cars, pushing rare-earth prices back down. Compared with forecast annual demand for cobalt of around 130,000 tons, "about 200,000 tons of production capacity will be maintained globally over the next few years, including planned mines," said an official at a major Japanese trading house.

Resource traders and small producers are opening new mines in the Democratic Republic of the Congo and elsewhere, boosting the supply of cobalt from around 120,000 tons in 2017. 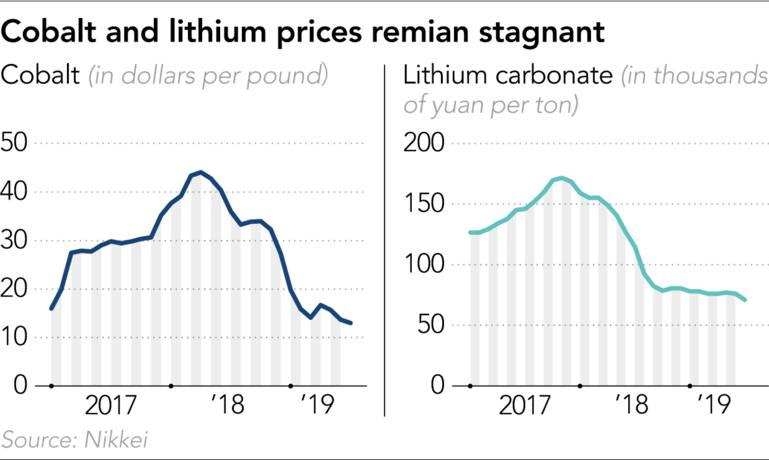 Lithium production is also rising in Australia, where there are rich deposits. According to estimates by the U.S. Geological Survey, 84,700 tons of lithium were produced worldwide in 2018, up 24% on the year, compared with a 20% increase in global lithium consumption to 47,600 tons.

Changing policy in China is also weighing on rare-earth prices. In addition to EVs, Beijing is considering promoting hybrid vehicles, which, because their batteries are smaller, require fewer of the metals than fully electric cars.

That shift "could slow the growth of cobalt and lithium consumption," said Naohiro Niimura, a partner at commodities consultancy Market Risk Advisory.

Because rare-earth prices have risen in anticipation of increased consumption, "prices are expected to remain at low levels, with few incentives for a rise," said Yuji Tanamachi, head of Tokyo-based metals market researcher IRuniverse.