NEW DELHI/MUMBAI -- When India's Tata Steel acquired the Anglo-Dutch company Corus for 6.2 billion pounds ($8.82 billion) after an intense bidding war with Brazil's Companhia Sideurgica Nacional in 2007, little did it imagine that it would want to exit the U.K. completely in less than a decade after being battered by cheap imports from China and high costs, particularly for electricity.

With thousands of jobs at stake, the trade union Community dispatched a delegation led by General Secretary Roy Rickhuss to Mumbai ahead of a Tata Steel board meeting on Mar. 29. The workers at risk wanted to present their case directly, but it was also part of a bid to save what remains of the British steel industry. Community has called on the British government to rescue the threatened plants. It put out an emotional video to explain how the loss of the industry will affect employment, lives, homes, and cultural identity. "We won't let it die," said one steelworker.

There had been a few encouraging signs. The British pound fell to a seven-year low on the U.S. dollar in February as investors fretted over the possibility of a British exit from the European Union, which will be decided by a referendum in June. Higher prices in Asia have also helped reduce the influx of cheap steel into Europe.

But analysts don't see the milder headwinds lasting, and the overall picture is discouraging. U.K. steel production in the first two months of the year was down 70% year on year, according to Swiss bank UBS.

After a board meeting lasting seven hours, Tata Steel announced next day that it wanted to divest itself of its uneconomic U.K. plants. Port Talbot, Britain's largest steelworks, is reported to be bleeding over $1.42 million each day. Tata Steel's decisions on its U.K. operations are by far the most consequential so far for Cyrus Mistry, who succeeded Ratan Tata as group chairman in 2012.

The activity cheered investors at least. On the day of the board meeting, Tata Steel shares lifted 1.4% in expectation of positive action, and 7% the following day when the selloff intention was announced. Overall, shares are currently only 2% down from a year ago, after hitting bottom at 201.35 rupees on Sept. 29. On April 1, the shares settled 1.8% down at the close of trading at 317.70 rupees. 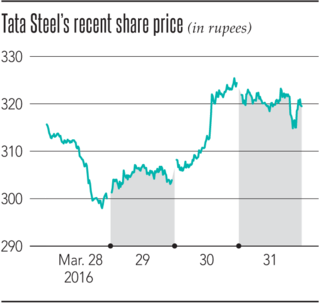 Meanwhile, British Prime Minister David Cameron left a beach holiday early for talks on the political and economic impact of the collapse of the U.K. steel industry. Although on Mar. 31 he was dismissive of nationalization, he said nothing can yet be ruled out. Business Secretary Sajid Javid had to cut short a business trip to Australia almost as soon as he arrived there.

Rickhuss said the U.K. has been grappling with the global steel crisis for years. "It is astonishing that the government was so unprepared for Tata's announcement," he said.

UK, the most exposed

Corus became Tata Steel Europe. It was acquired in Tata Steel's 100th year ahead of the 2008 financial crisis when trading conditions in the U.K. and Europe "rapidly deteriorated", in the company's estimation. Tata is the largest steelmaker in the U.K., second only in Europe to ArcelorMittal, owned by Indian industrialist L.N. Mittal.

Blame for the devastating global steel glut has been laid on China, which over the past decade bumped up its capacity to meet the needs of its once booming economy and major infrastructure development. China's output of over 800 million tons in 2015 was almost half the world's total, according to the World Steel Association. The glut has resulted in massive exports from China that have driven down prices in Europe, and the costly operations in the U.K. have so proved the most exposed. Tata Steel sold its Redcar plant to Thai conglomerate Sahaviriya Steel Industries in 2012. The heavily overextended company went into liquidation last year, making it Thailand's largest corporate failure since the 1997 Asian financial crisis.

Beyond a commitment to free trade, Tata Steel has pointed to specific policies that make the U.K. less competitive. Electricity charges to industry are the highest in the European Union. After tax, a kilowatt hour costs $0.14 in the U.K. compared to $0.11 in Germany and $0.07 in France.

Tata Steel restructured in the U.K. with a combination of divestment, job cuts and significant investment, but still suffered asset impairment of more than $2.84 billion over the past five years. It is no longer willing to carry on, particularly when it has performing assets to protect.

The company's European business includes a plant in the Netherlands in the port city of Ijmuiden. The Dutch steelworks is not on the block, and operations there are profitable, according to investment bank Investec. The loss-making U.K. plants have already been written off. "This is not a valuation exercise," Koushik Chatterjee, Tata Steel Group's executive director for finance, told the Nikkei Asian Review. "The assets are impaired in the U.K. It is a question of reducing our exposure," he said.

"Despite the many efforts Tata Steel has made over the past several years, the U.K. business continues to incur significant losses," said Chatterjee. Chatterjee described the Tata board decision as "strategic". Over the past decade, Tata Steel has invested close to $1.42 billion to enhance efficiency at its European facilities.

"We will work in a transparent and time-bound manner to explore all possible options," he said.

Tata Steel is, however, already in talks with Greybull Capital to sell its long products business in Scunthorpe. Separately, it announced on Mar. 24 that it is selling its Clydebridge and Dalzell steelworks to the Scottish government, which will sell them on to Liberty House.

Run by Indian-born industrialist Sanjeev Gupta, Liberty House has been snapping up distressed assets in the U.K. The company's ambitious plans include building the world's first tidal lagoon power plant a few miles along the Welsh coast from troubled Port Talbot. If Tata Steel fails to find buyers, an estimated 40,000 British jobs are at risk. Of these, 15,000 are with Tata Steel directly and 25,000 in related supply chains, according to IPPR, a British think tank.

Tata Steel's total consolidated debt stood at around $10.5 billion last year. According to its annual report for the year ending in March 2015, $7 billion of international debt had been refinanced to reduce risk.

Tata Steel UK Holdings, a wholly owned indirect subsidiary, refinanced debt of $3.47 billion originally incurred in relation to the acquisition of the Corus Group in 2007.

Drawing a line under its massive debts in the U.K. would enable Tata to focus on its profit-making assets in Europe, and promote consolidation of the steel industry there. A combination of Tata Steel's operations in the Netherlands and ThyssenKrupp, Germany's largest steelmaker, is one possible outcome, according to analysts. This offers "improved pricing discipline and cost cutting benefits", said American investment bank Jefferies. ThyssenKrupp is a battle-scarred veteran, having already lost heavily on investments in Brazil and the U.S.

Europe is not the only region buried under a mountain of cheap steel from China and Russia. Asia has also been affected. In India, the government has imposed minimum import prices for different grades of steel ranging from about $340 to $750 per ton.

A proposal in the U.K. to ignore the "lesser duty rule", which currently limits the size of anti-dumping duties, was opposed. Business Secretary Javid argued that "disproportionate" duties would impact steel consumers. Javid's predecessor, Vince Cable, has meanwhile been criticised by business minister Anna Soubry for not doing enough to help the steel industry.

In February, the world steel capacity utilization ratio slightly exceeded 66%, up 0.9 of a percentage point from January, but still 5.7 percentage points down year on year. While utilization has ticked up for two months running, Ernst & Young said most plants in China are running at below 80% of capacity.

China has said it will cut up to 150 million tons from annual production capacity over the next 5 years, but progress is slow. Capacity was reduced by only 31.1million tons in 2014. Dalian-based producer Dongbei Special Steel meanwhile defaulted on a bond payment last week a few days after its chairman was found dead at his home.

With no end in sight to the glut caused by China, Tata Steel's next move will be vital to the steel industry's overdue consolidation in Europe, but will likely saddle the U.K. with an unemployment burden.