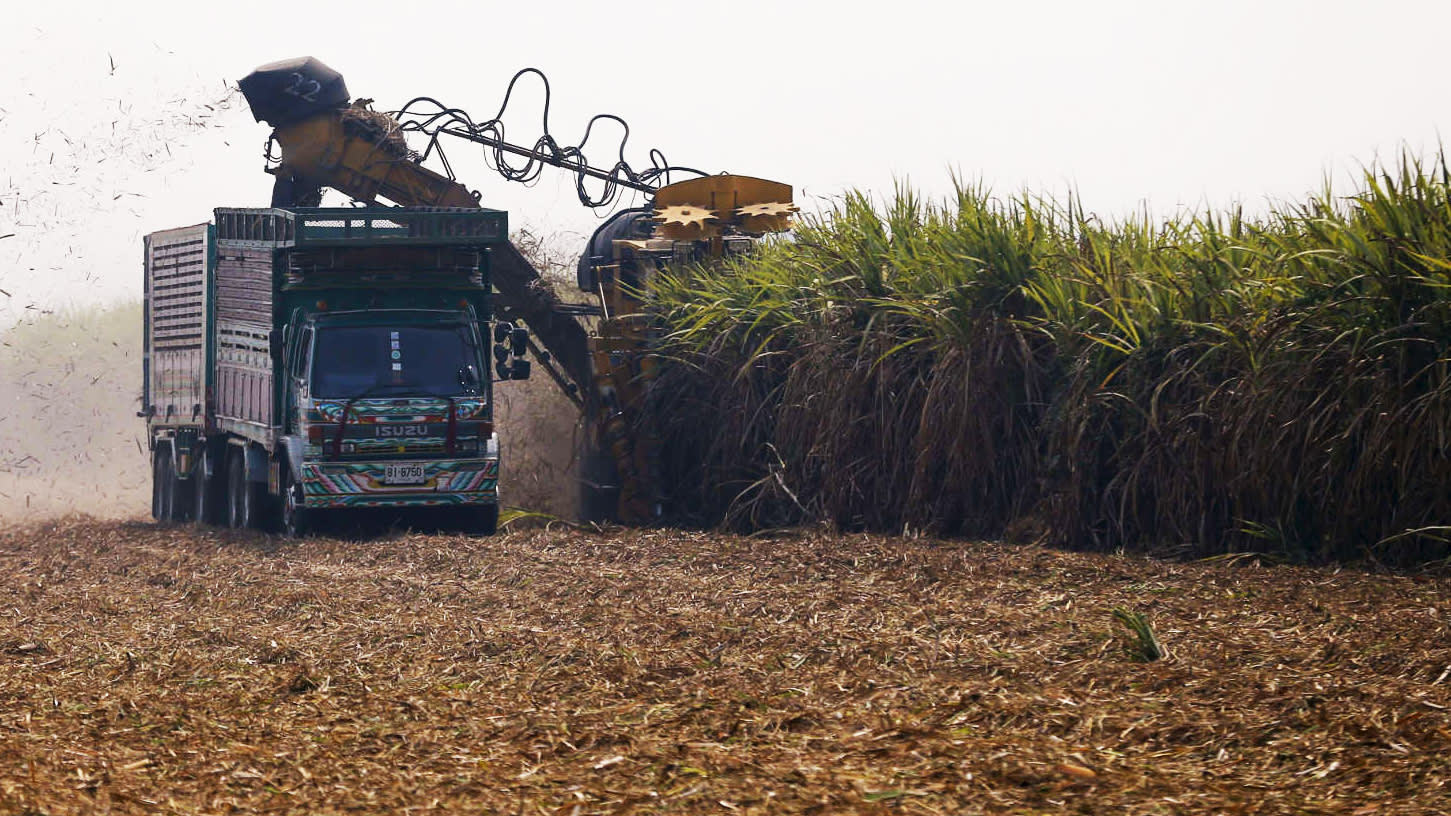 Sugar cane is harvested in Thailand's Ratchaburi Province. New investment is expected to boost domestic demand for sugar as a raw material for biochemicals.   © Reuters

BANGKOK -- Thailand is attracting international investment in biochemical plants that make use of the nation's abundant sugar supply as the government provides incentives to reduce farmers' dependence on exporting the overproduced commodity.

Thailand, the world's second-largest exporter of sugar, faces a global supply glut that has depressed international prices of the commodity. The government seeks to halve exports within the next five years by using them as chemical feedstock, part of a goal of shifting the country to higher-value industrial activity.

Purac needs 111,060 tons of sugar to supply its production line this year, and that is expected to rise substantially over the next few years on the strong global demand for polylactide plastic, an alternative to plastic derived from crude oil, according to the Office of the Cane and Sugar Board, which oversees Thailand's sugar industry.

Top Thai sugar miller Mitr Phol has invested more than 1 billion baht ($30.4 million) to produce functional food and enzymes using sugar. CEO Krisda Monthienvichienchai said the company has allocated a substantial amount of sugar for domestic use instead of export. Its plant in Khon Kaen Province has an annual production capacity of 10,000 tons for the local market as well as export, signaling that more than 100,000 to 200,000 tons of sugar will be used as a raw material for the facility.

Krisda told the Nikkei Asian Review that Mitr Phol started shifting to chemicals years ago, beginning with biofuel by producing ethanol from molasses, a by-product of the sugar-crushing process.

State-owned oil and gas group PTT set up a joint-venture with Japan's Mitsubishi Chemical to produce two alternatives to petrochemicals for plastic production -- bio-succinic acid and polybutylene succinate -- both of which are made from raw sugar. The chemicals are used to make a biodegradable alternative to plastic drinking straws, which international restaurant chains like Starbucks are starting to phase out.

PTT and Mitsubishi Chemical each hold a 50% stake in the joint venture, called PTT MCC Biochem, with an investment value of $212 million to produce 50,000 tons of biochemical products per year, implying that the venture will consume nearly 1 million tons of raw sugar.

The slew of investments in petrochemicals comes as the government promotes the industry. The biochemical sector is one the of priorities in the ruling junta's Thailand 4.0 industrial strategy, which calls for business incentives including a major cut in the personal income tax and land leases of up to 50 years.

Investments to expand biochemical plants are expected to boost domestic demand for sugar by almost 1 million tons this year. That is on top of the 2.5 million tons Thailand normally sets aside for domestic consumption every year.

These investments are consistent with the government's policy to ease the risk to farmers from producing commodity-grade sugar for export, which exposes them to volatile global prices.

Worawan Chitaroon, the secretary-general of the sugar board, said the proportion of sugar allocated for export is set to drop to 40% to 50%, down from around 80% now.

"It is good timing that we are developing a biochemical industry as the global sugar price falls. It helps absorb sugar supply and prevents farmers from being hurt," Worawan said.

Average global sugar prices dropped from 16 cents per pound in 2017 to around 10 to 11 cents this year, owing mostly to a combination of rising supply and weak demand.

The U.S. Department of Agriculture has predicted global sugar production of 188 million tons in the 2018-19 crop year, while global consumption is expected to remain low at 177 million tons.

With the oversupply expected to continue for the next few years, falling exports from Thailand are unlikely to have a major impact on global sugar prices this year.

But "continued falls of as much as 50% over the next four to five years from the normal export of around 10 million tons a year could eventually have a certain impact on the world market," according to a trader at a Bangkok-based international sugar-trading house.