Toyota has approved the quality of China Baowu's steel sheet for use in hybrid and electric vehicles and is already taking delivery in Japan. (Photo courtesy of Toyota)
Nikkei staff writersJuly 13, 2020 18:02 JSTUpdated on July 13, 2020 22:01 JST | China
CopyCopied

TOKYO -- Toyota Motor will procure some of its electrical steel sheet from China Baowu Steel Group, China's largest steel supplier, in a move that could presage an era in which Japanese steel-makers will have to compete on price as well as quality, Nikkei has learned.

Steel sheet is a high-performance product and a crucial electric vehicle material, the production of which requires sophisticated technology. Because high quality is critical, Toyota has mainly sourced it from Japan's leading steel-makers.

The deal is seen as a sign Chinese steel-makers, reliable suppliers of large quantities of general-purpose products, are catching up with Japanese rivals in terms of quality.

Toyota has not only approved the quality of China Baowu's steel sheet for use in hybrid and electric vehicles made in Japan, it is already taking delivery of the product.

It is believed to be the first instance in which a major Japanese automaker is using electrical steel sheet made by a Chinese company in passenger cars built in Japan. A Toyota executive says products from China Baowu Steel are now "as good as [their] Japanese-made counterparts." (Source photo by Reuters)

Electrical steel sheet is magnetized through a special process. Its production requires sophisticated technologies, such as to remove impurities. The product goes into core components of electric vehicles, including motors.

The material is essential if motors are to operate efficiently. As such, it directly affects the mileage a vehicle can achieve. As high quality is key to the product, only a handful of steel-makers, including Nippon Steel, have been able to supply it to companies like Toyota.

China Baowu will supply a limited amount of the steel to Toyota, but a Toyota executive said the Chinese product "is as good as its Japanese-made counterparts. ... We're going to diversify the material's suppliers, as use of electric vehicles is expected to grow."

China Baowu has also started supplying its products to major U.S. electric carmaker Tesla, according to the Japan Iron and Steel Federation's research.

The deal shows that the steel industry is entering a new phase. China, which produces 60% of the world's crude steel, had primarily focused on low-grade steel used in construction materials and other general-purpose products. Its entry into the high-end side of production means that it is encroaching on one of the few big sources of revenue left for Japanese players.

China, the world's biggest seller of electric vehicles, plans to raise its target for electric vehicle sales to 25% of new car sales by 2025. In 2018, the figure was 4%. 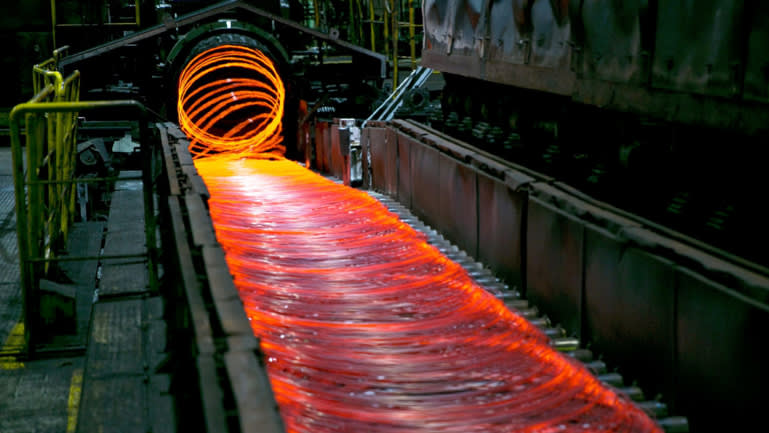 High-performance steel being produced at a Nippon Steel plant in Japan. Toyota will switch some of its electrical steel sheet procurement to China Baowu Steel Group, China's largest steel supplier.

According to the World Steel Association, Baowu in 2019 was the second largest producer of crude steel, after ArcelorMittal Europe.

The company holds a 60% share in China's electrical steel sheet market and is moving forward with plans to invest over 2 billion yuan ($285.7 million) in its Shanghai factory to further increase its capacity for the product.

China has been consolidating its steel industry, creating bigger players that can eliminate overlapping costs and divert more resources to research and investment.

Japanese counterparts are becoming more vigilant amid the rise of Chinese steel companies supplying high value-added products to the automobile and other key industries.