Collected metal is unloaded at a recycling yard in Beijing, China.   © Reuters

TOKYO -- China is moving to curb a wide range of waste imports in response to the country's worsening pollution, causing spikes in some commodity prices and threatening to raise costs for a range of industries.

The government has announced plans to restrict the import of various kinds of waste, including scrap metal and wastepaper. Because the waste includes both recyclable material and unusable stuff, imports inevitably increase the amount of rubbish that has to be disposed of.

In the month since the ban was announced in late July, prices for secondary, or recycled, aluminum alloys made in China have risen 10%, according to a Japanese importer. In secondary production, used aluminum is extracted from waste, then melted and used to make alloys. Secondary alloys produced in China are used widely, mainly in car parts. 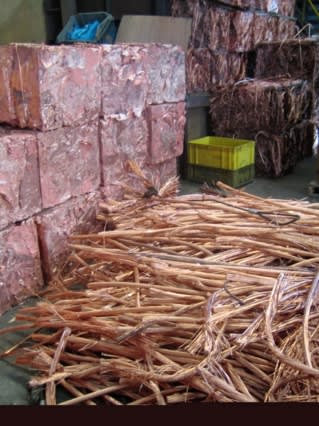 Higher prices for these alloys will eat into the profits of importers unless they can pass them on to customers.

At the end of July, Chinese media reported that the government told industry organizations to restrict imports of waste, including nonferrous scrap metal, by the end of 2018. Aluminum scrap is extracted from junked cars and other kinds of waste. It typically contains impurities such as plastics. The government is seeking to curb imports of aluminum scrap because the leftovers must be disposed of in China.

"Certain types of miscellaneous scrap are being returned to their countries of origin," said Kenichiro Hashimoto, an executive at Hashimoto Alumi, an Osaka-based scrap metal trader.

The move has raised fears of a shortage of aluminum scrap in China, triggering price spikes for secondary aluminum alloys, which have jumped to around $2,000 per ton from around $1,800 before the ban was announced.

If the restrictions are expanded to imports of recyclable materials, raw material prices are bound keep to climbing. "As the supply of nonferrous scrap has fallen, demand for nonferrous metals will grow," predicts Yoshikazu Watanabe, president of Tukushi Shigen Consul, a consultancy specializing in resources. Does China have an exit strategy from mass steel production?

'Dr. Copper' has difficult diagnosis to make regarding Chinese patient

This prospect has driven up prices for nonferrous metals. Benchmark three-month copper futures on the London Metal Exchange rose to $6,329 per ton on July 26, when China's decision was reported, up 5% from the previous weekend.

Higher nonferrous metal prices could push up costs in a wide range of industries, from autos to construction.

China's curbs on waste imports are also beginning to affect the wastepaper market. In response to the government's announcement of a ban on imports of used magazine paper by the end of the year, local traders stopped purchasing imported used paper, betting that consumption will decline.

The association of wastepaper wholesalers in the Kanto region around Tokyo was unable to conclude a contract for September shipments of wastepaper to China, the first time that has happened in five years.

There are questions over how effective China's new environmental regulations will be. Many factories ignore government orders to slow production in order to protect jobs. Some details of the waste import curbs remain unclear, including which kinds of nonferrous scrap metal will be subject to the restrictions. This uncertainty clouds the price outlook for a number of raw materials.