TOKYO -- When U.S. President Donald Trump dropped a bombshell on Twitter in the wee hours last Friday, announcing that he and his wife had tested positive for COVID-19, U.S. crude oil futures promptly tumbled nearly $2 a barrel.

They are still hovering around $38, down 5% from the end of September.

With Trump's campaign activity limited, market players saw it benefitting his opponent, former Vice President Joe Biden, whose greater focus on environmental issues is seen as a likely headwind for the oil industry.

With the presidential election just a month away, international commodities markets hinge on the twists and turns of a hotly contested campaign.

Oil is a prime example. The environment has emerged as an issue in the race as Trump and Biden position themselves on opposite sides. While Trump has pledged to protect the oil industry, Biden supports measures to promote solar and other forms of renewable energy, which would cut into demand for crude.

Biden has set out an agenda to actively address climate change, including $2 trillion in government investment, a return to the Paris accord on day one of his administration, broader use of electric vehicles and achieving net zero emissions in the electricity sector by 2035.

Biden's support in polls is hovering around 50%, well above Trump's 42%. Though the numbers shift from day to day, markets appear to be pricing in a Biden victory.

Shares in companies involved in renewable energy have climbed steadily since March, in contrast to oil-related names, which have fallen this year. Investors see "a long-term slump in oil demand," said Shogo Maekawa of J.P. Morgan Asset Management.

The shale revolution that got off the ground in 2010 has made the U.S. the world's largest oil producer. Washington decided in 2015 to lift a 40-year ban on oil exports, changing the global supply picture. American oil has become a major factor in crude prices. Trump is a strong ally of the oil industry. Biden would move quickly to tap alternative carbon-neutral energy soruces.   © Reuters

Investors see another risk to the crude market with a Biden victory. The candidate has called for bringing the U.S. back into the 2015 Iran nuclear deal, from which Washington withdrew in 2018. Loosening sanctions imposed by the Trump administration would open the door to a resumption of oil exports by Iran, loosening the supply-demand balance further.

If Tehran pushes ahead with stepping up oil shipments, it would undermine an agreement by OPEC and Russia to cut production. That could spur others to follow suit and reignite a scramble for market share.

Meanwhile, in the financial market, money is shifting toward gold.

The U.S. budget deficit and monetary easing have both expanded rapidly during the coronavirus pandemic. This trend is not expected to change regardless of who wins the election in November.

When Biden said during his Sept. 29 debate with Trump that his plan against climate change is "going to create thousands and millions of jobs," the president immediately cut in to question how much that would cost.

In addition to Biden's plan to spend $2 trillion over four years to help tackle climate change, many of the Democrats' goals on child care, education and health insurance involve large-scale fiscal spending.

Reversing Trump-era tax cuts and raising taxes on corporations, which Biden proposed during the debate, is not expected to make up for the shortfall, and there is concern that the budget deficit will increase should he become president.

But Trump during his years in office has also added to the U.S. deficit through large-scale tax cuts for corporations, and more recently, through coronavirus response measures. The U.S. national debt will hit $26 trillion in fiscal 2020, according to projections by the Congressional Budget Office. This is equivalent to 126% of gross domestic product and is the highest level in U.S. history, even compared with the immediate aftermath of World War II.

Monetary easing has been critical in supporting the American economy through the pandemic. The Federal Reserve on Sept. 16 decided to keep its policy rate close to zero over the long term.

"Blurring lines between fiscal and monetary policy leads to greater expectations for inflation, which pushes down real interest rates and leads to a currency depreciation and an increase in gold prices," said Hiroshi Watanabe at Sony Financial Holdings. 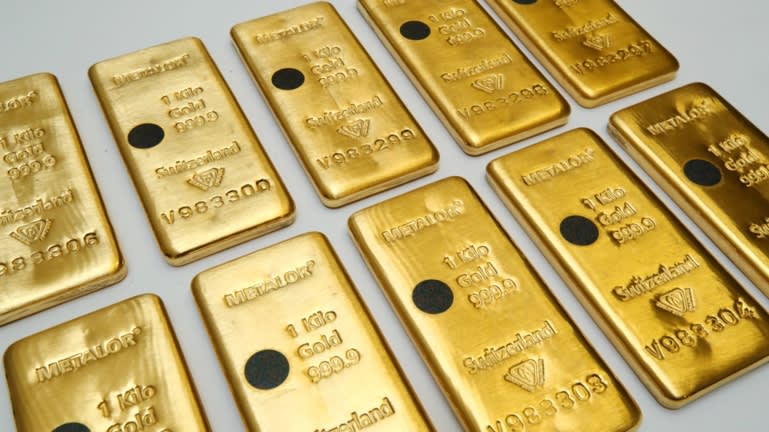 Investors have flocked to gold as inflation hedge. The budget deficit has ballooned under Trump, and Biden is pursuing an expensive progressive agenda.

Gold is a "storehold of wealth" which serves as a hedge against inflation, Bridgewater Associates said in a July report. The hedge fund held $1.18 billion in exchange-traded funds as of the end of June.

The U.S. may need to figure out how to exit fiscal and monetary easing under its next president as the economy recovers. "It could try to solve the 'twin' issues by depreciating the currency and inflation," said Shinichi Ichikawa at Pictet Asset Management (Japan).

Inflation was what ultimately helped the U.S. manage its postwar debt. Market watchers are expected to continue investing in gold with this in mind.

Both Trump and Biden are keen on securing rare-earth metals, considered to be the essential vitamins of the tech industry. The two candidates see the need to wean the supply chain off of China from a defense and environmental perspective.

Trump signed an executive order last Wednesday that called for decreasing the reliance on China for rare earths and boosting national self-sufficiency.

"Our nation's undue reliance on critical minerals, in processed or unprocessed form, from foreign adversaries constitutes an unusual and extraordinary threat," Trump declared in the order.

This largely overlaps with Biden's environmental agenda. The former vice president looks to have the U.S. produce its own rare earths, which are the key ingredients for high-performance magnets used in electric-vehicle motors. Rare earth ores from Chinese mines, such as this one in Inner Mongolia, occupy 60% of the global market.   © Reuters

Fueling concerns is China's lopsided control of the rare-earths market. Last year, China produced 132,000 tons of rare-earth ores out of the 210,000 tons produced worldwide, according to an estimate by the United States Geological Survey. That grants China a 60% share, and is five times U.S. output of just 26,000 tons.

Rare earths can be found across the globe, but the radioactive material contained in deposits creates a hurdle in mining the commodities. China faces less costs associated with environmental protection, giving the country an advantage in price competition.

China is said to hold a 70% share in separation, refinement and processing of rare earths. The U.S. currently exports ore to China, then reimports the processed products.

In July, the U.S. Department of Defense decided to financially support the Australian miner Lynas, which is building a rare-earth separation facility in Texas jointly with U.S. partner Blue Line.

The goal of becoming China-free still faces stiff challenges. For one, the U.S. does not possess the adequate processing plants or the technology necessary for the preliminary steps in manufacturing high-performance magnets.

"Where and how to process the separated and refined material will become an issue," said Yuji Tanamachi, CEO of IRuniverse, a Tokyo research firm for the metal industry. Low cost competitiveness is another issue. Eliminating dependence on China will likely be a task that will grappled with beyond the term of the next president.