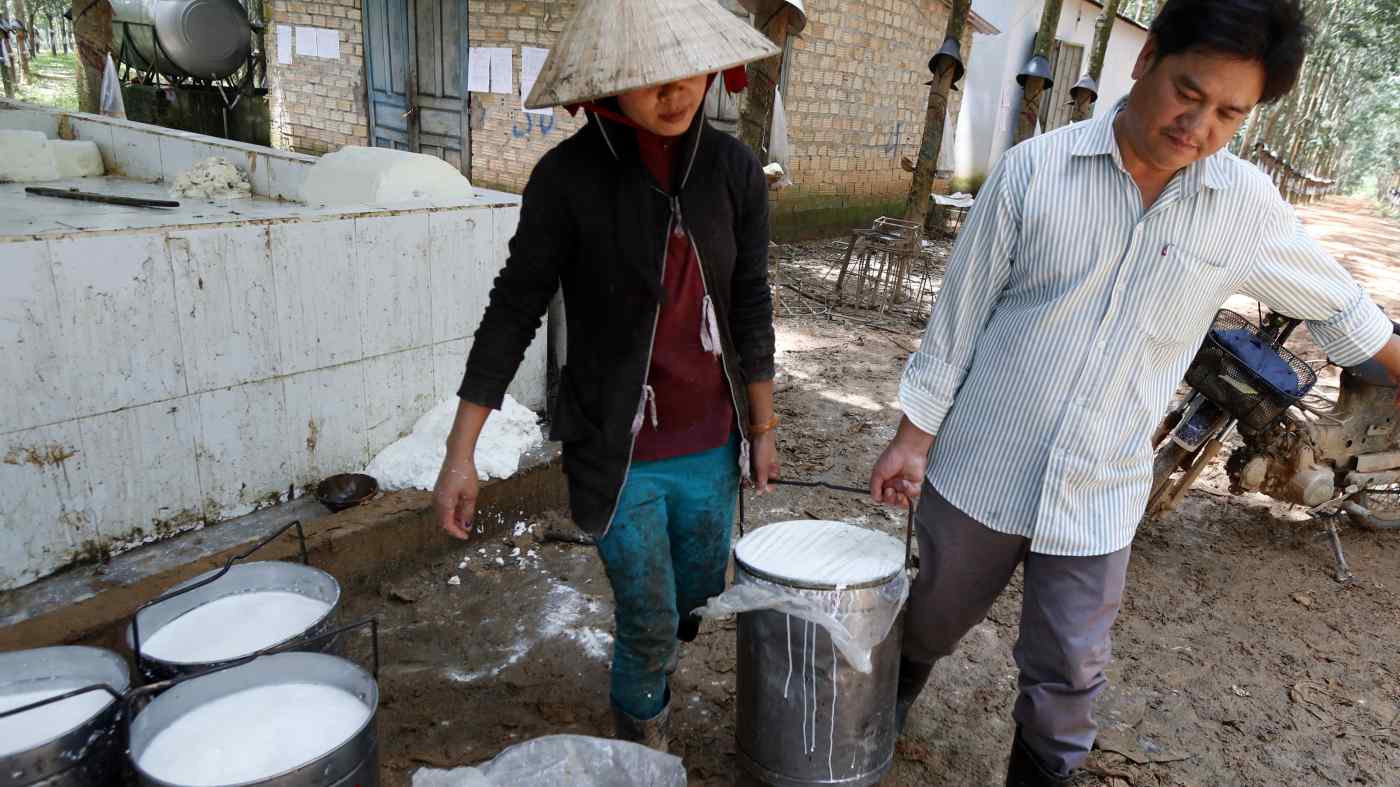 Vietnam ranks fifth in the world for land for rubber cultivation -- some 926,000 hectares in 2020 -- but is third globally for output, producing some 1.22 million tons in 2020, according to a report last year by Forest Trends.

Exports of natural rubber material, such as rubber blocks and concentrated latex, and rubber products, such as tires, medical supplies and shoe soles, have boomed from $2.9 billion in 2015 to almost $5.5 billion in 2020, according to the same report.

Increasingly, however, major companies like Nike and Adidas are prioritizing sourcing rubber from producers certified by the Forest Stewardship Council (FSC), the industry's gold standard in terms of meeting legal and environmental criteria.

But Vietnam has no FSC-certified suppliers.

Phuc Xuan To, a senior policy analyst at Forest Trends, said much of Vietnam's rubber sector was unlikely to make the FSC grade because of its "messy" supply chain, involving some 265,000 smallholders and hundreds of companies.

Moreover, imports of unprocessed rubber from Cambodia and Laos are mixed in with domestically produced rubber. Major questions surround the management of rubber plantations in Vietnam's smaller neighbors, where the sector has been linked to land disputes and logging.

"Supply chains are long and in many cases it is impossible to trace the product along the chains," Xuan To said.

Much of the imported rubber comes from Vietnamese companies operating plantations in Cambodia and Laos. In an example of the industry's checkered history, state-owned Vietnam Rubber Group had the FSC accreditation for its Cambodian operations revoked in 2015 for evicting villagers from their land.

Mismatched statistics further cloud the picture. Vietnamese customs data shows that in the first half of 2021, almost 392,000 tons of unprocessed rubber was imported into the country from Cambodia. This is 1.5 times the total volume of imports in 2020 and almost 50 times larger than 2019. Cambodian customs data, however, put the country's total rubber exports at just 102,800 tons in the first half of this year.

Cambodia's Ministry of Agriculture, which oversees the country's General Directorate of Rubber, did not to respond to Nikkei Asia's request for comment.

Jean-Christophe Diepart, a Cambodia-based agricultural researcher, says most rubber produced in Cambodia was sent to Vietnam as unprocessed coagulum via informal channels. This trade, he said, increased after rubber prices crashed in 2012 as it is conducted through middle men who offer a slightly higher price for the raw material.

"It's not 100% of the latex [exports]. There are still some official channels of local processing of latex in Cambodia that export through official lines to China, India, Vietnam and Malaysia," Diepart said. "But the bulk of rubber is exported to Vietnam this way."

For Cambodia, this informal trade means domestic processors are short of latex and thus unable to run at full capacity. "There's a huge waste of value," Diepart said.

Meanwhile, global buyers and brands are calling on Vietnam and others to increase transparency in their rubber supply chains -- and they say they are willing to pay for it.

U.S. rubber company Yulex already supplies some apparel brands manufacturing in Vietnam, but it uses rubber imported from FSC-approved plantations in Sri Lanka or Guatemala to do so.

Yulex founder and CEO Jeff Martin said the company was eager to work with producers in Vietnam that could get FSC certified.

"We can give them a supply agreement, such that we could have negotiated prices that will show a significant premium to what they would get for either selling FSC in the marketplace, or just selling commodity rubber in the marketplace," Martin said.

Stefano Savi, director of the Global Platform for Sustainable Natural Rubber, whose members account for 50% of the global volume of natural rubber, said the group wanted to see buyers pool their resources to help producers achieve higher standards.

"We need to put the right incentives in place," he said.

In another sign of change, Japanese giant Sumitomo Rubber Group in August released an updated Sustainable Natural Rubber Policy that includes a pledge to begin third-party auditing of suppliers in areas such as the environment, labor practices and human rights.

Efforts to clean up Vietnam's supply chain, however, are meeting resistance, said Xuan To of Forest Trends.

Part of it comes from state-owned companies that dominate the sector thanks to their control of vast land reserves, he said. There is also a lack of urgency because over half Vietnam's rubber goes to China, where there are no major barriers in terms of compliance with standards.

"[The state companies] believe they still can cling onto the China market. They are right. But this may change in the future. Also, putting all [your] eggs in one basket is so risky," Xuan To said. "If these companies don't start to change, maybe they won't exist in the future."