TOKYO/NEW DELHI -- Global gold demand slipped 1% to 4,356 tons in 2019 due to weaker appetite for jewelry in Asia amid economic uncertainty and higher prices.

Gold, known as a safe-haven asset, has become more expensive as buyers fret over U.S.- China trade friction and tensions in the Middle East. Gold futures in New York rose to $1,523 an ounce in December, compared with $1,284 in January 2019.

Prices for the precious metal hit record highs in various Asian currencies, including the Japanese yen, the Indian rupee, the Chinese yuan, and the Australian dollar. That held down consumer demand for gold jewelry, which is both a luxury good and a store of value in parts of Asia. 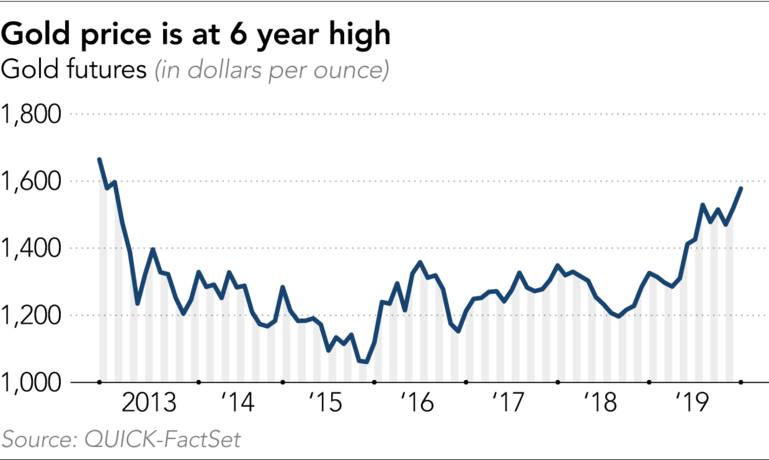 Worldwide investment demand was up 9% to 1,271 tons, helped supported by strong demand for gold-backed exchange-traded funds.

However, demand for gold bars and coins fell sharply in India and China. China saw a 31% decline, while in India demand fell 10%. Investors sold physical gold, including bars and coins, to take profits, while few bought physical gold as prices remained high.

In India, equities performed very well throughout the year with the benchmark S&P BSE Sensex gaining 15% in 2019. Prime Minister Narendra Modi's government in September cut the corporate tax rate to 22% from 30%, which fueled stock market gains.

Higher gold prices weighed on buyer sentiment in India, where gold is a symbol of good fortune and an important wedding gift for brides. Indians also prefer to keep gold jewelry for a rainy day.

In the October to December quarter, demand for gold picked up in India ahead of the Hindu festivals of Diwali and Dhanteras. It is considered auspicious to buy the precious metal during that season. But overall, "it was a huge drop" in 2019, Somasundaram PR, India managing director at the World Gold Council, told CNBC-TV18, a news channel. The fall was particularly sharp in the second half, when there was a 24% drop in Indian gold demand. That pushed the full-year figure down 9% down on the year.

"I would say, quarter-four was a mixed quarter. It did see some hope of revival, but ultimately the price increase did have an impact on consumer sentiment," Somasundaram added.

Vijay Soni, who runs a small jewelry shop in New Delhi, said his business suffered a 30% to 40% decline in 2019 compared with the previous year. "Customers were not forthcoming, and those who did make purchases preferred to go for lightweight jewelry instead of heavier ornaments, impacting our margins," he told the Nikkei Asian Review.

Customers were cautious with their money. Kanta Mamgain, 64, recycled her old gold earrings. "I exchanged my old pair for a new one," she said, adding her new earrings are slightly lighter but have a better design.

While individual investors refrained from increasing gold hoards, central banks bought up the precious metal. Though growth slowed by 1% from 2018, central banks added 650 tons to their reserves in 2019, the second-highest annual total in 50 years.

The biggest buyer last year was Turkey, which added 162 tons, followed by Russia which bought a net 158 tons. China increased its holdings by 96 tons, while India added 33 tons.

Turkey's purchases underscore the country's efforts to hedge its bets as tensions rise in the Middle East, said Takahiro Morita, chief of Morita & Associates, a gold market researcher. Russia, China, and India bought gold as they sought to rebalance their foreign exchange reserves, which are heavily weighted in dollars. 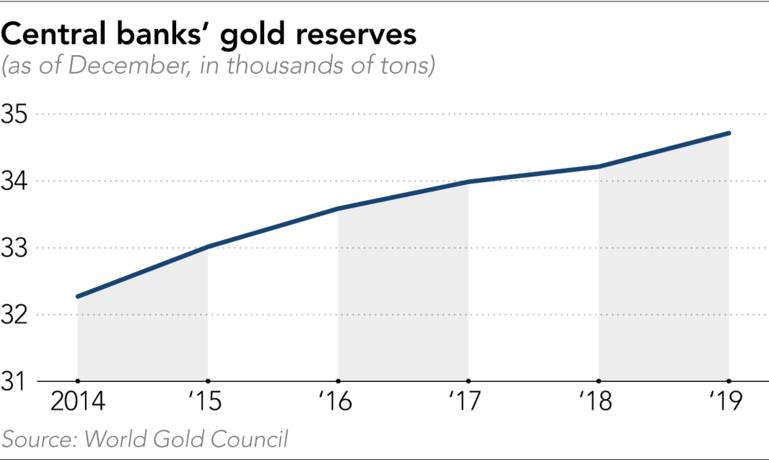 Central banks' brisk demand for the precious metal is expected to continue. A July survey conducted by the World Gold Council revealed that 54% of central banks expect global gold reserves to increase over the next year. The survey of 150 central banks received 39 valid responses.

Analysts expect gold prices to remain high in 2020. "The gold price could hit $1,800 an ounce this year and will stay at $1,700 or higher throughout the year," said gold market analyst Koichiro Kamei. Kamei said that U.S.- China tensions and the U.S. Federal Reserve's loose monetary policy will sustain prices.

The coronavirus outbreak is a new factor fueling uncertainty. "The impact is tremendous, as the world is dependent on the Chinese economy," said Naito Securities' Chihara. Thailand has cut its economic growth outlook for 2020 from 3.3% to 2.8% due to the impact of the virus on its tourism industry.

The outbreak could trigger a slowdown in the world economy. "Those concerns will boost gold investment demand," said Morita at Morita & Associates. "But it will also hurt China's jewelry demand," he said, with gold given for weddings and gifts depressed as fewer people go out because of the epidemic.