Why Asia weaponized rare earths, soybeans and palm oil in 2019

TOKYO/SHANGHAI -- As China and the U.S. exchanged trade war salvos in May, Chinese President Xi Jinping visited a rare-earth magnet factory in the southeastern province of Jiangxi. His message was clear: China, which accounts for nearly 90% of the world's rare earths production, would have no compunction about taking the crucial elements hostage.

Commodities reflect what is happening in the world. This year in Asia they echoed the U.S.-China trade war, the Hong Kong protests, global warming and deteriorating relations between nations. They also augured what is in store for 2020.

"Looking back on 2019," said Yoshikazu Watanabe, president of Tsukushi Shigen Consul, a consultancy specializing in resources, "it was about weaponizing commodities."

According to Watanabe, Xi's Kabuki performance came with his government consolidating domestic production of the resources that go into everything from smartphones to electric vehicles to the most modern jetliners. In 2015, the government began integrating the country's many rare earths producers into six dominant state-owned enterprises. "The integration has almost been completed this year," Watanabe said, "which means it has become much easier for the government to weaponize the natural resource."

Trump noted the implied threat and turned to Australia, the second largest rare earths supplier. The two countries this year agreed to work together to finance projects related to critical minerals like rare earths. 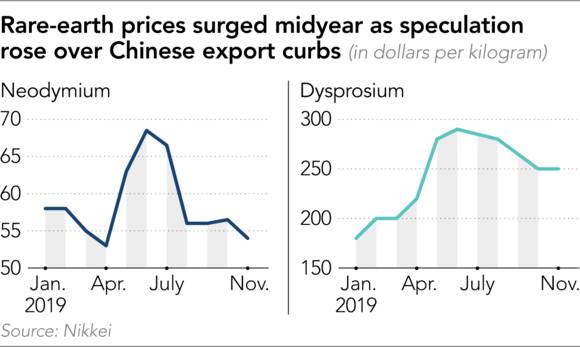 "In 2020, we have to carefully see if China and the U.S. actually leverage rare earths as a bargaining chip," Watanabe, said. "If so, speculation over rare-earth supplies will spread, and prices will rise."

The price of dysprosium, which improves permanent magnets' heat resistance, is at earlier this month was at $250 per kilogram, up 40% from last January.

But Beijing dismisses accusations that it is using rare-earth exports as trade leverage.

"Following the principle of openness, collaboration and shared benefits," a foreign ministry spokesman reiterated last month, "China has been developing its domestic rare-earth industry and stands ready to meet legitimate needs of other countries with rare-earth resources and products, thus contributing to promoting economic growth at home and abroad."

Analysts say China's ore industry strategy has been driven by domestic concerns that include protecting its environment and meeting demand from its own high-tech manufacturing industry.

"China's approach to rare earths has not only been to master resource production and ensure that Chinese industries have the resources they need," wrote John Seaman at IFRI, a French think tank, "but also to increasingly dominate the downstream, value-added industries that depend on these critical metals."

Earlier this month Myanmar showed that China's rare-earth refining industry faces disruption risks itself. The Southeast Asian nation shut the border it shares with China and suspended rare-earth ore exports, citing environmental concerns. The move, probably triggered by Chinese companies operating in Myanmar, including some without permits, led to price increases for a number of ores, according to Citic Securities.

Soybeans have also become trade war fodder, with the U.S. and China having already wielded the grain as a bargaining chip. China has strategically increased its reliance on Brazil, the world's second-largest soybean supplier, to the chagrin of the U.S., the world's largest producer, said Hideki Hattori, general manager at Food Management Support, an Itochu group company.

A bushel of soybeans early this month fetched around $9, down 9% from two years ago. Since the trade war began, soybean prices have been well under $10 per bushel compared to June 2018. "The stalemate between the two countries will continue in 2020, which will pressure the price of soybeans," Hattori said.

In Malaysia and Indonesia, the big commodity concern this year has been over palm oil; the two neighboring countries jointly account for 90% of the global supply. In the fall, India suspended palm oil imports from Malaysia after Kuala Lumpur criticized New Delhi for its actions in the part of Kashmir that it administers. Thus India, which had been the biggest importer of Malaysian palm oil, weaponized that status.

But there are other concerns for palm oil exporters. The European Union, another major importer, is moving toward banning palm oil by 2030 due to deforestation concerns.

Despite the gloom, palm oil prices hit a near two year high earlier this month as Malaysian production decreased and Chinese demand increased. China is using the commodity as a substitute for soybean oil.

In 2020, plam oil prices will likely maintain their momentum as "China is expected to purchase more palm oil to reduce its dependence on soybean imports," Hattori said.

In September, the government announced that it would begin banning nickel ore exports in January as Indonesia tries to ramp up its own refining industry and win more value from the resource. Nickel prices hit a five-year high after the announcement. "There is an increased risk of commodity prices growing unstable due to resource nationalism," said Akio Shibata, head of Japan's Natural Resource Research Institute.

Shibata argues that there is another cause of commodity price instability: global warming. In 2019, droughts in Australia and Thailand significantly reduced production of wheat and rice, two major grains.

"In 2020, we will continue to see commodities being exposed to environmental risks," Shibata said.

This is leading to food security risks, where there is another big factor at play -- African swine fever. China, the world's biggest consumer of pork, could be especially vulnerable as the pandemic continues to kill pigs and push up the price of pork.

Chenjun Pan, a senior analyst at Dutch lender Rabobank, estimates that the pandemic has killed off at least 55% of hog herds. This comes to more than 200 million hogs; in normal years herd inventories are over 400 million hogs.

As instability and uncertainty rocked 2019, the haven asset of gold gained momentum. Prices grew 14% from the beginning of the year and hit a near six year high in August.

But weak demand in Asia will put downward pressure on gold prices in 2020, according to Itsuo Toshima, a gold market analyst at Toshima & Associates.

In India, the world's second-largest gold market after China, consumers are refraining from purchasing the metal and instead are selling while prices are high. The trend has caused the difference in prices between Mumbai and benchmark-setting London to widen.

"This indicates that the price of gold is likely to decrease," Toshima said.

The big protests in Hong Kong, which began in early June, are also pulling down gold prices as fewer Hong Kongers buy jewelry and other luxury items. Hong Kong-based Chow Tai Fook Jewellery Group announced in November that same-store sales growth dipped 27.5% in the first half of fiscal 2019.

But Toshima argues there are several bullish factors that will remain at play in 2020, including the U.S. presidential election and the uncertainty leading up to it. "If the trade war is prolonged," he said, "there will be more demand for gold investment."

China's central bank also plays an important role in the gold market, Toshima said. The People's Bank of China has increased the amount of gold holdings in its foreign currency reserves to "lessen dependence on the dollar amid the trade war with the U.S.," he said. "China will continue to purchase gold steadily, which has a long-term impact on the gold market."