Coronavirus deals much swifter blow to Asian stocks than past crises

While the slump only about matches the declines in the crash that followed the collapse of Lehman Brothers in 2008, it is the pace that makes the rout this time around seem all the more brutal.   © Reuters
NARAYANAN SOMASUNDARAM, Nikkei Asian Review chief banking and financial correspondentMarch 31, 2020 20:53 JST | Hong Kong
CopyCopied

HONG KONG -- The coronavirus-driven stock market rout across Asia has been the most rapid ever and sent valuations tumbling -- with the region's emerging markets bearing the brunt.

The start of the year proved bad enough for investors in Japan, where stocks fell 20% in the three months to March 31 -- the worst skein since the last quarter of 2008, in the aftermath of the Lehman Brothers collapse. In March, the Nikkei 225 index recorded its biggest intraday fall in 30 years and largest weekly loss ever.

But for Thailand and Indonesia the picture was even worse: Markets fell 29%. It was just as bad in India, now on lockdown, where the decline matches the fall during a balance of payments crisis in 1992.

The MSCI-Asia-Pacific-ex-Japan Index dropped 22% in the quarter, the biggest fall since the global financial crisis, exacerbated by foreign funds dumping over $25 billion in emerging Asia stocks.

With the coronavirus pandemic rippling across the world, many companies have gone into "survival first" mode, hoarding cash and cutting dividends. But some analysts believe Asian markets could recover and end up higher for the year, if the outbreak is contained soon.

Said Hou Wey Fook, chief investment officer at Singapore-based DBS: "There is a price for everything. ... After the massive meltdown, we believe a lot of the negative headwinds have already been substantially priced in."

Overall, markets' first quarter slump about matches declines in the crash that followed the Lehman collapse. But it is the speed of the fall that makes the rout this time around seem all the more brutal.

Japan, India and South Korean stocks suffered almost all of their sell-off in the latter half of the quarter as the market value of shares around the world dropped $17 trillion in 52 days from the peak in mid-January.

The rapid declines have sent Asian markets into bear territory and slashed long-term valuations to such a degree that some analysts now consider markets oversold. 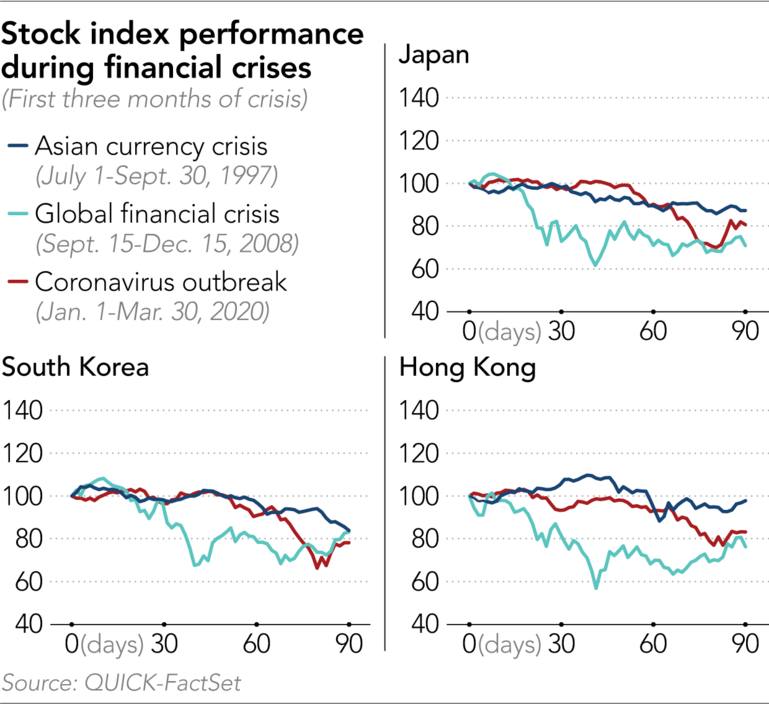 Some strategists are also buoyed by the fact that the largest Asian companies are among the most cash-rich globally, which allows them to sustain investment and dividends. These strategists are forecasting that Asian equities could end the year higher than last year on the back of unprecedented stimulus and hopes for a containment of the pandemic.

Strategists at Nomura still expect the MSCI-Asia-Pacific-ex-Japan index to climb 16% this year compared with its end-2019 level in their base case scenario, which assumes social distancing eases gradually after April and the unprecedented stimulus keeps companies afloat.

The cyclically adjusted price-to-earnings ratio -- calculated by dividing the current price of a stock by its average inflation-adjusted earnings over the past decade -- has slumped to a historic low.

Lower-than-average values imply higher-than-average long-term annual average returns, with Japan always recording positive momentum when the measure has fallen below 16 times long-term earnings, according to a study by Societe Generale.

The measure in Japan stands at 15.6 times earnings, the lowest since 1983, or when such data became available. Hong Kong stocks stood at 13 times earnings, close to their 2009 lows. Asia ex-Japan has breached that level. The valuation of emerging Asian stocks ex-China -- India, Indonesia, South Korea, Thailand and Malaysia -- is at a historical low based on 171 monthly data points.

"Immediate earnings expectations have little value today," said Frank Benzimra, head of Asia equity strategy at Societe Generale. "The long-term valuations don't tell when is a good time to invest but [are] a good reckoner to determine the predictive value in the future based on long-term data. By that measure, investing in Asia should pay off."

Benzimra and some peers at other banks say three factors are required to stabilize markets. Two of them -- central banks delivering liquidity and fiscal stimulus equal to 10% of the economy to negate lost output -- have been more or less delivered. Now the focus is on the virus peaking.

"We expect the economic outlook to remain uncertain, with seesawing markets and persistent volatility, and have made several short-term [three months' view] changes to our investment views," said Xian Chan, global head of wealth insights, at HSBC Holdings. "We are downgrading global equities from overweight to neutral, on the expectation that corporate earnings will deteriorate significantly, particularly in developed markets. We are upgrading investment grade corporate bonds from underweight to neutral."

A spike in volatility and a rising dollar as investors flee to safety is set to trouble several emerging market debt issuers who have to redeem or refinance $115 billion in dollar-denominated bonds that mature this year. Analysts warn a default can trigger a wider credit crisis. The coronavirus has infected more than 690,000 people across more than 200 countries and left over 33,000 dead with the infection curve still climbing across the world despite unprecedented lockdowns.

Those have led to swathes of the global economy closing down, and confronted industries from manufacturers to service providers with supply disruptions and waning demand. This reality favors cash-rich companies, especially in North Asia, analysts say.

For instance, in Japan almost half of the top 100 companies, outside the financial sector, are sitting on cash. In South Korea, the number stands at 37, in Taiwan it's 40, while in China it is hovering around 50. In the U.S., the number is five.

"If you think about companies' ability to sustain capital expenditure, and dividend payments, using their balance sheets, then companies in Asia are actually in much better shape," said Jim McCafferty, joint head of Asia Pacific equity research at Nomura in Hong Kong. "Part of the reason for that is that Asian companies have been through the 1997 Asian financial crisis, they've been through SARS in 2003 and they also remember the global financial crisis."

This experience could be a key differentiator as companies around the world begin slashing dividends to conserve cash. Goldman Sachs said on Monday it expects S&P 500 dividends to fall by a quarter this year as the "record high level of net leverage" coupled with the ongoing credit market stress means many companies are unlikely to borrow to fund their dividends.