TOKYO -- Central banks around the world are adding to their gold stashes, particularly in emerging markets, as they try to shore up their currencies amid rising geopolitical tensions and, in some cases, to stave off U.S. economic pressure.

The total amount of central bank holdings of gold has risen by about 7% over the five years to 2016, according to the World Gold Council, a global trade group. Last year, central banks were net buyers of gold, for the seventh year in a row, according to Thomson Reuters GFMS. As of the end of July, they held some 33,400 tons of gold reserves in all. 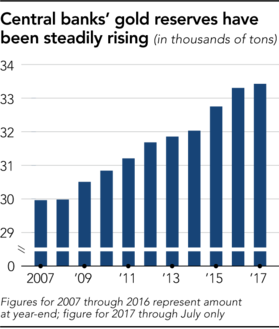 Monetary authorities have been increasing their reserves of the precious metal mainly to defend their currencies. Analysts predict the trend will continue for a while.

Russia, the world's sixth-largest gold holder, was one of the major purchasers over the period. The Russian central bank expanded its gold reserves by 12% on the year to 1,729.4 tons at the end of July. Because Russia depends on oil and natural gas exports for most of its foreign currency earnings, lower energy prices put strong downward pressure on the ruble. While the value of a currency is affected by the creditworthiness of a country, the value of gold is not subject to sovereign risk. Moscow is trying to protect the value of the ruble by increasing its gold reserves.

Another factor behind Russia's growing gold pile is the economic sanctions the U.S. and Europe have imposed on it after it seized the Crimea from Ukraine. The West also accuses Moscow of fomenting a separatist fight in its neighbor.

Kazakhstan, in Central Asia, has been purchasing gold for nearly five years. Its holdings have surged 170% over that period to 280.9 tons, most of it mined domestically. The country prefers gold, which can be converted into various currencies, over U.S. Treasurys, whose values are affected by conditions in the U.S., said Itsuo Toshima, a market analyst.

At the end of 2011, Turkey began allowing commercial banks to use gold for the reserves they are required to hold at the central bank. The step was taken in response to the rapid slide in the Turkish lira brought on by the country's worsening current-account balance and other factors. This has caused the central bank's gold reserves to swell by about 60% in volume terms versus 2012 to 482.9 tons.

China, the world's fifth-largest holder of gold, had been building up its reserves at a breakneck pace since 2009, but its holdings have leveled off. They are little changed since November 2016. The fall of the yuan explains this. The People's Bank of China, the central bank, had been using its foreign currency reserves to prop up the yuan, selling massive amounts of dollars to buy the Chinese currency.

China's purchases of gold from abroad, in turn, fueled dollar buying for trade settlement. Now it seems to have ended its gold buying spree to protect the yuan. With the yuan no longer weakening, China has resumed building up its foreign reserves through purchases of foreign assets such as U.S. Treasurys.

China is expected to expand its gold reserves steadily in the coming years, eventually bringing them up to the level of Germany, the second-largest gold holder, with over 3,000 tons of reserves, predicts Chin Chiyoki, chief analyst at Sunward Trading.

Since the Asian currency crisis of 1997, many emerging markets have tried to reduce their dependence on the dollar for foreign reserves.

The crisis over North Korea's nuclear weapon and missile programs is likely to accelerate the trend, as holding gold helps countries like China and Russia ease economic pressure from Washington.