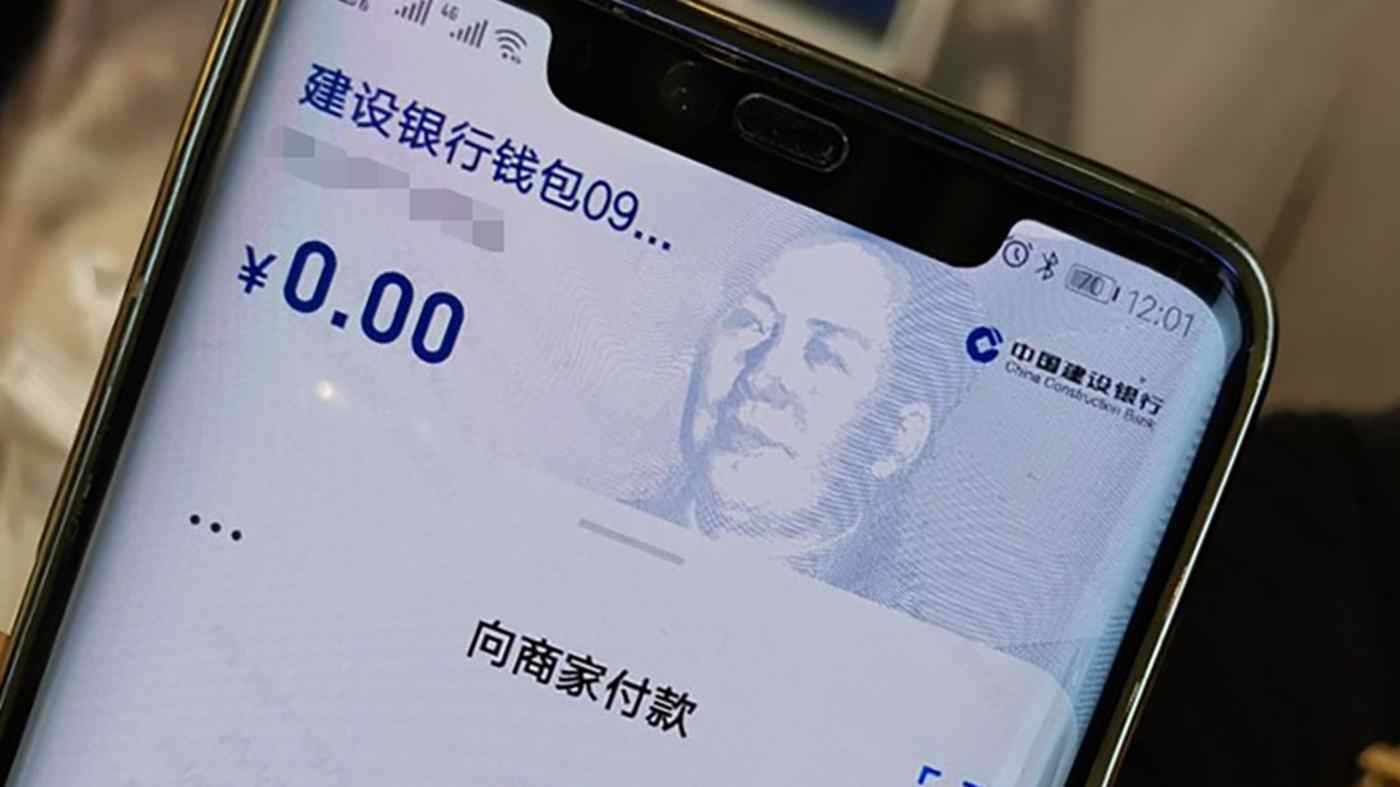 A screenshot of the China Construction Bank digital yuan mobile app: Few are aware of the trial that is meant to eventually wean the public away from cash. (Photo by CK Tan)
CK TAN, Nikkei staff writerMarch 19, 2021 15:34 JST | China
CopyCopied

SUZHOU, China -- In one of the latest trials being conducted by the People's Bank of China into its ambitious project to digitize the yuan, Zhou Jie considers herself one of the winners.

The entrepreneur, who runs a bubble tea outlet called Bianjing Teahouse in a shopping mall in the eastern city of Suzhou, was one of the people selected to get 200 yuan in a trial rollout of the digital yuan.

"I spent it all on meals," said Zhou, who stepped out from behind her beverage counter to show the digital currency app on her mobile phone, with a zero balance. "I was happy to be one of the lucky ones."

A handful of customers showed up to order drinks but none used digital yuan. "We have had quite a number of customers who used it during [the] Lunar New Year holidays," Zhou said.

Her handout in December was part of trials that began in October as the Chinese central bank proceeds cautiously toward what would be a radical change in the way money circulates.

The trials are also aimed at stimulating consumption and diversifying the payment system. Suzhou's trial was open to permanent residents with a social security number and bank account, who received the handout through a lottery on mobile apps.

Chengdu, in western China, started its own trial on March 3, with 200,000 e-wallets worth 40 million yuan ($6 million) issued randomly to residents in two denominations of 178 yuan and 238 yuan for spending across 12,000 designated retail stores.

Smaller trials also began in Shanghai this month for a limited period, with selected banks issuing the digital yuan to staff and clients, according to retailers at two malls in a tourist area. The currency can be used to purchase drinks and snacks at designated vending machines in nearby subway stations.

China is already well accustomed to electronic money through mobile payment apps, such as Alipay, owned by Alibaba-subsidiary Ant Group, or WeChat Pay, owned by Tencent.

In Suzhou, Zhou Jie said the PBOC trial was similar to using other apps. "Perhaps the only disadvantage is that the digital yuan was not transferable to another person," she said.

A bank account-linked digital currency is just one of the central bank's digital payment initiatives. Other products include physical wallets in the form of plastic cards, keychains and wearable gadgets with near-field communication capability for offline transactions.

The PBOC provides the back-end infrastructure and supervision, while commercial banks are responsible for circulation, market development and business processing.

The initiatives reflect China's ambition to be at the forefront of a central bank digital currency rollout. The Chinese central bank has not announced details about issuance but officials have said the digital currency is aimed at replacing the cash supply, which will lead to lower cost and prevent illegal money transactions. It will also diversify China's mobile payment market, dominated by Alipay and WeChat Pay.

And China does not hide its ambition to internationalize the yuan. Last month, the PBOC teamed up with counterparts in Thailand, the United Arab Emirates and Hong Kong to study the possibility of using central bank digital currencies for cross-border payments. The current trials also involve thousands of online and offline merchants recruited by the six state-owned commercial banks, including the Bank of China and Postal Savings Bank of China.

In Suzhou, not all users were as enthused as Zhou.

"We only have a handful of customers using digital currency to pay," said Ni Mengjiao, a proprietor of a chain restaurant called Hetaiji Dumplings. "Apparently, many were not aware, as they asked me about the digital yuan on these promotional materials," explained Ni, pointing to stickers and a pop-up banner at the entrance of her shop.

In the second trial last month, only 1% of Suzhou's 11 million people were selected for the handout. Users were primarily young people, judging from the customers at Ni's outlet in an upscale mall.

As a participating merchant, she did not need to pay a processing fee for each transaction, unlike Alipay and WeChat Pay. "It's good to offer an additional payment channel, especially when digital currency eventually goes mainstream," Ni said.

But she said one drawback was that transactions could not be integrated into her outlet's payment system. "It's a hassle for me to report the transactions separately to headquarters," she said.

"I wasn't aware of [the trial] until I saw shops displaying the digital currency sign," said a Suzhou resident.

Public awareness may still be at an early stage, but trials have gathered pace. China Pacific Insurance is the latest to join the digital currency trial bandwagon, issuing the first insurance policy in digital currency last week to state-owned Lingang Group to underwrite a construction project in Shanghai.

"Bankers said we may be able to issue paychecks in digital currency in the future," said Ni the dumpling entrepreneur. "When this happens, we might see more people using it."