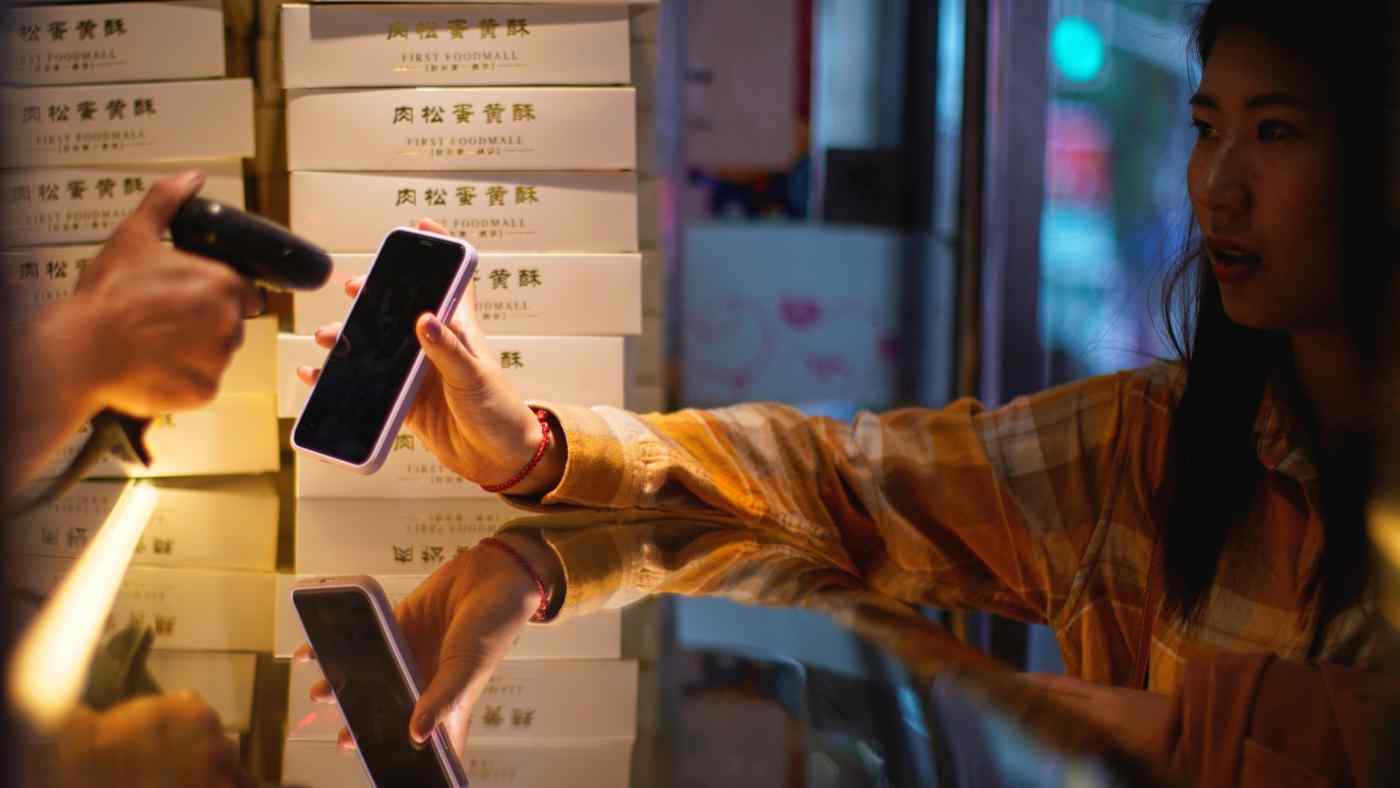 SHENZHEN/BEIJING -- As a couple in their 60s entered the self-checkout at a Walmart in Shenzhen, China's high-tech hub, the woman pulled out her phone instead of reaching for her wallet.

That is no surprise in a country where many use payment apps like Alipay. But the pair were taking part in a first-of-its-kind test of the country's plans to issue a digital yuan.

After scanning a bottle of cleanser and other items, the couple scanned a QR code, packed up the items and were on their way. "I usually use my smartphone to pay for things, but this feels safer," the woman said.

This positive experience marked a step toward Beijing's goal of launching the digital yuan by the 2022 Beijing Winter Olympics, a move some outside skeptics call a rushed approach to tighten financial surveillance.

Worried they may be ceding the lead in developing a central bank digital currency, members of the Group of Seven major industrialized nations have pushed back by championing the rule of law and transparency in creating digital payment systems. A customer in this Walmart in Shenzhen uses the digital yuan to pay for her items. (Photo by Takashi Kawakami)

For the test, which began Monday, the Shenzhen government distributed 10 million yuan ($1.5 million) of the digital currency among 50,000 participants selected by lottery. That equates to each participant being granted 200 yuan, or $30, to spend at any of 3,389 designated restaurants and stores.

The trial ends next Monday. Other tests of digital currencies have mainly been done by the public sector, but this is the first to involve a large number of ordinary citizens. There was no cost to take part in the test. More than 1.91 million people applied to take part with and acceptance rate at less than 3%.

In 2018, the People's Bank of China -- the central bank ---started NetsUnion, a central processing platform every mobile payment system is required to go through. If the digital yuan gains widespread use, authorities would technically be able to grasp almost every transaction.

President Xi Jinping expressed his desire to make the digital yuan succeed by calling for the development of the digital sector and future industries during a speech Wednesday in Shenzhen marking the 40th anniversary of the establishment of the Shenzhen Special Economic Zone.

The day before, digital payment services were a topic of discussion of Tuesday's virtual meeting of finance ministers and central bank chiefs from G-7 nations.

Asked about China's currency project, Japanese Finance Minister Taro Aso told a news conference: "It's the kind of thing that makes me ask, 'Hey China, how are you on transparency?"

"If countries outside of the G-7 issue [digital currency] as well, it needs to be done in a manner that ensures transparency," Kuroda told reporters.

Apprehensions over China's digital currency assume such transactions will not stop at the nation's border. If the digital yuan is taken up across the world through trade and other avenues, it could undermine the dollar's status as a global key currency.

Sanctions that ban dollar transactions would risk losing effectiveness. And if the digital yuan becomes the international standard in terms of technology, it could create a hindrance to other nations' issuing their own digital currencies.

Japan and Western nations face a wide gap in catching up to China. Seven central banks and the Bank for International Settlements released a report Friday that laid down basic principles for issuing central bank digital currencies. The principles include doing no harm to monetary and financial stability, and promoting the coexistence with cash and private-sector digital currencies.

The BOJ is planning a proof-of-concept trial to study a digital currency that will be executed in three phases. The first phase will begin as early as next spring with tests of basic functions within a closed system. A trial involving ordinary consumers will not occur until the third phase.

In Tuesday's joint statement, G-7 ministers and central bank chiefs stressed that confidence in digital payment systems is bound to "transparency, the rule of law and sound economic governance." But the communique can hardly be expected to influence non-member China.

The focus shifts to whether the Group of 20 economies, to which China is party, will be able to adopt a shared framework on digital currency.