TOKYO -- The value of bitcoins plunged in early August after Bitfinex, a major exchange based in Hong Kong, said it had been hacked and funds stolen.

It was a serious security breach that could weaken investors' confidence in bitcoin exchanges and cramp growth in the popularity of the digital currency.

"Today we discovered a security breach that requires us to halt all trading on Bitfinex, as well as halt all digital token deposits to and withdrawals from Bitfinex," the exchange said in an Aug. 2 blog posting. "We are investigating the breach to determine what happened, but we know that some of our users have had their bitcoins stolen." 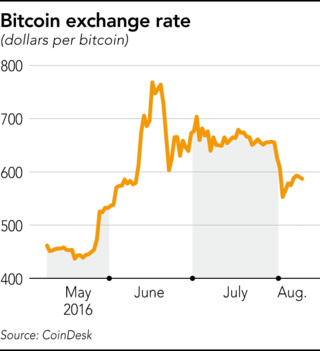 The workd's fifth-largest bitcoin exchange in trading volume later confirmed that hackers had stolen $65 million worth of bitcoins.

Following the announcement, bitcoin's market value against the dollar cratered, sinking as much as about 20% at one point. Bitfinex became the target of a hacking attack in May as well.

Bitcoin has risen significantly in the weeks following Britain's decision to leave the European Union. Investors have been piling into the crypto currency as a safe haven. But its value lost half of its rise after the hacking.

The theft came as a grim reminder of the troubled history of digital currencies.

In 2014, some 50 billion yen ($493 million) worth of bitcoins and customer cash went missing from Tokyo-based Mt. Gox, then the world's largest bitcoin exchange. The company's chief was eventually arrested on allegations of embezzlement.

Also in May this year, hackers stole some $2 million in digital currencies from Gatecoin, another Hong Kong-based digital asset exchange.

In these cases, the cryptographic technologies at the heart of digital currencies were not breached. Hackers apparently took advantage of vulnerabilities in the systems of the exchanges.

The operators of exchanges have been working to enhance the security of their systems, but these companies, mostly small startups, may have been unable to take sufficient measures to protect their systems from sophisticated cyberattacks.

The recent series of cases in which hackers stole digital currencies have cast the spotlight on a technique called "hard fork." Some experts think this could be a way to return stolen funds to users.

Digital currencies are based on blockchain technology, which can cryptographically verify and record transactions. Blockchains, also known as distributed ledgers, are online registers in which transactions can be recorded. Each transaction is tied to the previous one and verified by an unspecified number of users. This series of transactions makes up the blockchain, which can be shared by multiple users, creating a system of verified transactions and ownership.

The hard fork approach deletes the records of transactions from the time of the theft, bringing the registers back to the state before the hacking.

This could be way to return stolen digital currencies to the original owners.

In June, bitcoin's main rival, Ethereum, suffered an attack that led to massive theft. A foundation that operates Ethereum responded to the crime by resorting to a hard fork as an exception. The fork rolled back changes to the ledger and recovered the money from the thief.

But this method is a risky option because digital currencies are supported by the promise that ownership transfers once made cannot be canceled.

If a hard fork is used frequently, investors' faith in digital currencies itself could be shaken.

After all, the best way to deal with the problem at the moment is for individual exchanges to step up their efforts to bolster the security of their systems.