SEOUL -- Investors in South Korea are calling for the government not to meddle in the markets after its threatening messages on cryptocurrencies caused a crash in the value of bitcoin and other virtual currencies.

Finance Minister Kim Dong-yeon said Tuesday that the administration is considering shutting down cryptocurrency exchanges, as suggested by Justice Minister Park Sang-ki last week. Having raised the ire of investors, Moon, in a mild rebuke of his ministers, said that government departments should be careful in express any opinion before the administration had reached a conclusion.

"It is not appropriate that each ministry's opinion is open to the public before they have discussed fully the issue," Moon was quoted as saying by his spokesman Park Soo-hyun.

Bitcoin lost a quarter of its value at 13.4 million won ($12,520) apiece by Wednesday afternoon from 24 hours ago on the Bithumb platform, the largest cryptocurrency exchange in the country. Ethereum, another virtual currency, lost 27.6% to 465,000 won over the same period.

The trading of bitcoin and other cryptocurrencies had spread quickly among tech-savvy South Korean investors in their 20s and 30s. It is not uncommon to see young commuters hammering out trades on apps in the subway. College students also form a big portion of bitcoin investors, seeing such trade as an easier way of making money than getting a well-paid job.

"About half of my friends trade cryptocurrencies. They even do so in classrooms, not listening to professors," said Park Ji-hyun, a senior student of Japanese literature at Hankuk University of Foreign Studies in Seoul. "They invest about 1 million won which they made through part-time jobs." 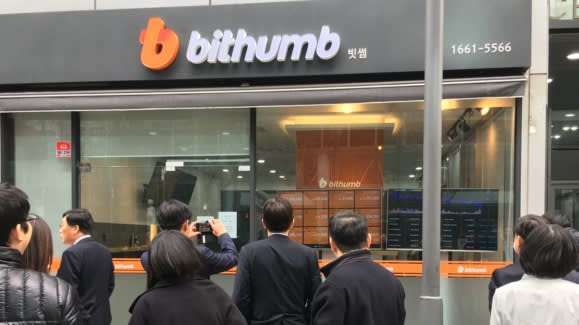 People check trading of cryptocurrencies at a Bithumb exchange in downtown Seoul on Jan. 17. (Photo by Kim Jaewon)

But analysts said that the market would continue to be volatile as the South Korean and Chinese governments try to control the trade of virtual currencies. China has already banned initial coin offerings and centralized exchanges and is set to escalate its crackdown on cryptocurrency trading by targeting online platforms and mobile apps that offer exchange-like services.

"The government's negative message helped bitcoin and other cryptocurrencies lose their values globally," said Park Nok-sun, an analyst at NH Investment & Securities. "As China also moves to strengthen its regulations, we expect more volatility in the market."

Japan, too, has attempted to exert some level of control over the market by registering 11 cryptocurrency exchanges in September. New payment legislation that took effect in April requires exchange operators to register with the Financial Services Agency and meet certain standards, such as holding a minimum of 10 million yen ($88,000) in capital and managing client funds separately from virtual currencies.