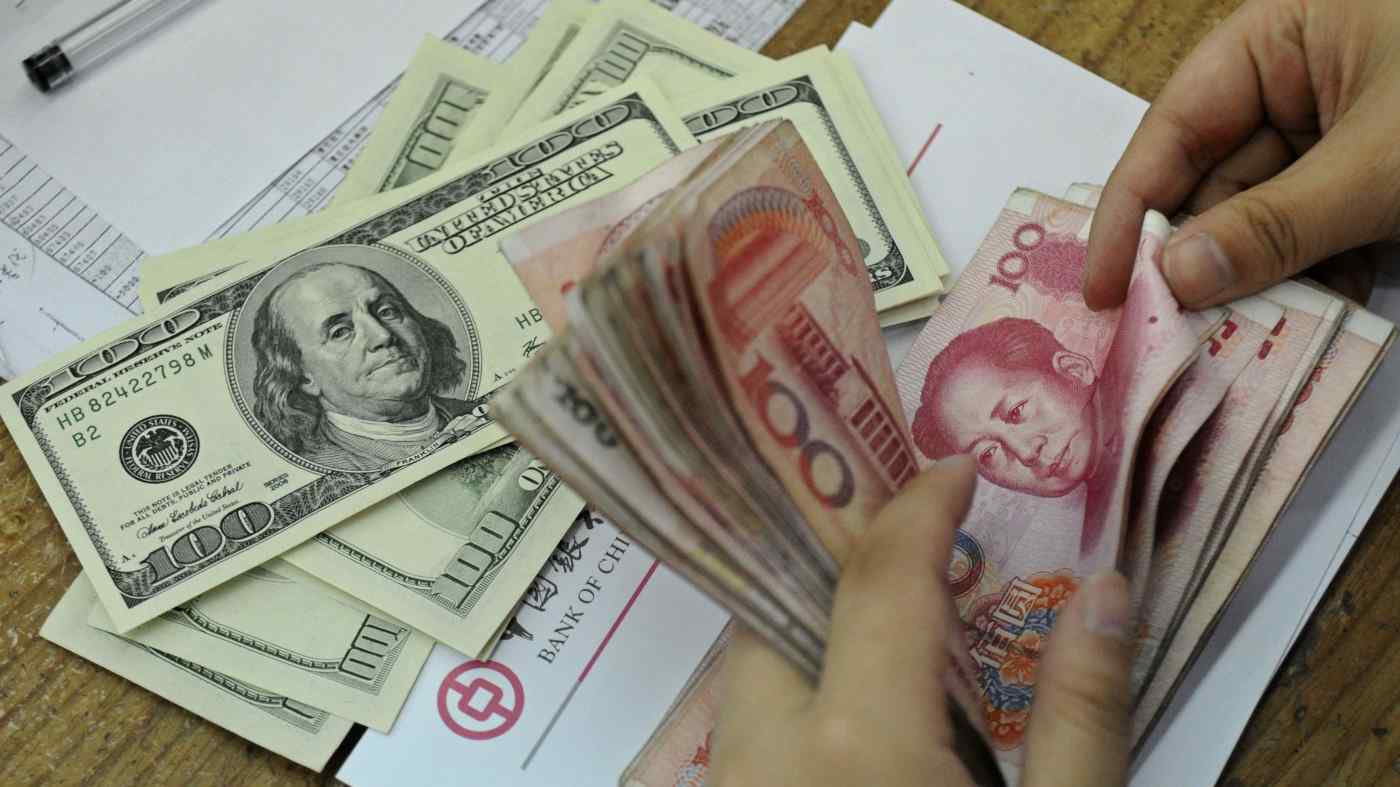 SHANGHAI -- The yuan touched a one-year low on Thursday, sparking concerns that the currency will weaken past the threshold that in the past has triggered China's monetary authorities to intervene in the market or impose capital restrictions.

After the People's Bank of China set the yuan's reference rate at 6.7066 per dollar early Thursday, the yuan weakened as far as 6.77, a level last seen in July 2017.

The currency has depreciated by more than 7% from a high reached in April, and is nearing the 6.8 line that has spurred Chinese authorities to take action over the past few years. In Hong Kong, the yuan has already crept into 6.8 territory.

A multitude of factors are putting downward pressure on the yuan, not least being the U.S-China trade war. The friction is sparking worries that the already slowing Chinese economy will soften further.

The shrinking spread between Chinese and American interest rates is also cheapening the yuan. Long-term Chinese yields now hover below 3.5%, tracing a roughly 0.5-point decent since last fall. Meanwhile, rate hikes by the U.S. Federal Reserve have lifted long-term Treasury yields to the upper 2.8% level, equating to a rate spread of just 0.6 point.

In some Asian countries, including China, funds have begun moving to the U.S., said a foreign exchange dealer at a major bank.

Foreign companies operating in China are in the midst of repatriating profits back home after reporting earnings for 2017. That often involves the purchase of foreign currencies. Additional demand for non-yuan currencies is coming from Chinese vacationing outside the mainland. Bank branches have been crowded for days since the middle of July.

Market participants have become watchful whenever the yuan trades between 6.8 and 7 to the dollar because that is the zone where Chinese authorities are expected to take defensive action. After the global financial crisis hit, the currency remained fixed in the lower 6.8 range for approximately two years. When the yuan depreciated starting in the summer of 2015, China tightened capital controls as the currency approached 7 to the dollar.

"I suspect they will take strong countermeasures against the weak yuan," said a source at an investment bank, recalling past experience. So far, though, Beijing has taken limited action. Market analysts believe that China bought yuan and sold dollars on July 3 and 12, but they appear to be one-off moves.

Chinese bank branches have put in place restrictions such as requiring foreign currency purchases to be declared beforehand. But the government decided not to put a cap on corporate fund transfers.

Other Chinese officials have been restrained in their comments. Yi Gang, governor of the PBOC, simply said the central bank will stabilize the yuan at a reasonable level.

Many analysts predict Chinese exports will weaken in the second half of the year under Washington's punitive tariffs. Beijing is assumed to be tolerating the cheap yuan to make its exports more competitive. Furthermore, Chinese President Xi Jinping is working to open the country's financial market wider, putting him in a poor position to impose capital limits or take other steps that might put off foreign companies.

But if the yuan is left to depreciate steeply, "funds could keep flowing out of China with no end," said a source at a foreign bank. If the previously surmised 6.8-to-7 line has shifted, institutional investors and others might alter their positions significantly.

Others fear a repeat of the yuan sell-off and subsequent stock market crash that started in summer 2015. The Shanghai Composite Index fell for a second consecutive day Thursday, ending at 2,772, near the 2,655 nadir logged in January 2016.

Shanghai's trading volume has increasingly undershot the 200 billion yuan ($29.5 billion) threshold that indicates an active market. That points to a bearish mood among retail investors, who account for 80% of trading. The stock markets in Shanghai and Shenzhen have been trying to draw more overseas investors through mechanisms such as a linkup to Hong Kong, with limited success.

For Chinese authorities, the choice is either allowing the market to determine the value of the yuan or making stability the priority through regulation or market intervention. It was only last year that the PBOC took the bold step of modifying its yuan-fixing formula to curb swings.