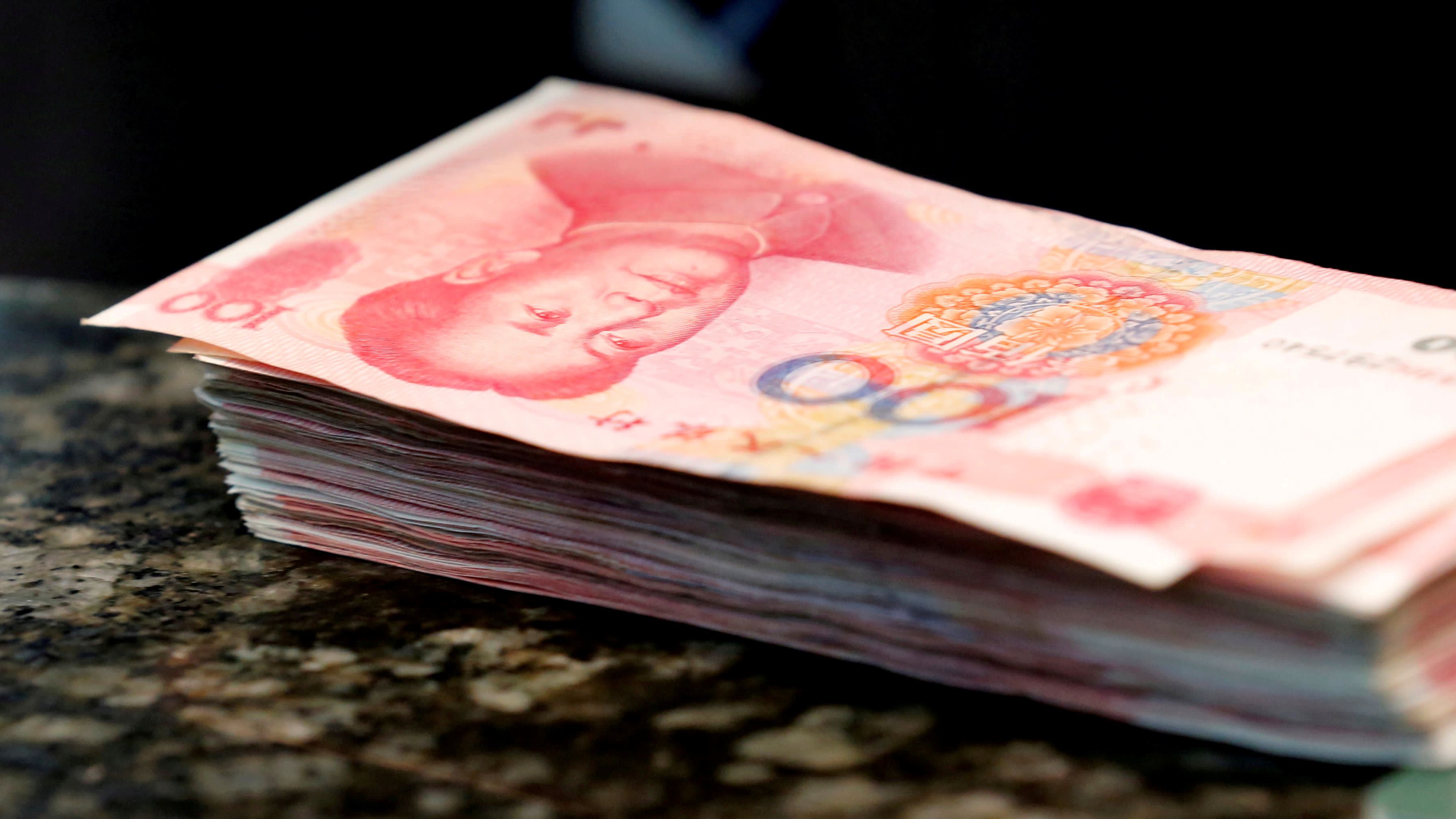 The overnight cost of borrowing yuan for Hong Kong banks jumped to the highest level since May.   © Reuters
October 10, 2018 04:35 JST | China
CopyCopied

China's effort to support its decelerating economy is heaping pressure on the yuan, signaling challenges for Beijing as it tries to stimulate growth without triggering destabilizing capital outflows.

The yuan weakened beyond 6.93 per dollar this week, coming within striking distance of its lowest level since January 2017, after China moved over the weekend to free more funds for domestic banks. The currency briefly recovered to around 6.91 in Tuesday trading in mainland China and Hong Kong after a short-term lending rate jumped.

Interbank lending rates in Hong Kong -- an offshore trading hub for the yuan -- surged on Tuesday, possibly due to efforts by China's central bank to prevent the yuan from weakening too much, several analysts said.

The overnight cost of borrowing yuan for Hong Kong banks jumped to 5% from 1.745% a day earlier, hitting its highest level since May. The rate for one-week lending reached 7.6% Tuesday, up 4 percentage points since last week to its highest level in over a year.

Higher short-term rates make it more costly to bet against the yuan using borrowed funds. In the past, Chinese authorities have pushed interbank lending rates higher during bouts of depreciation pressure on the currency to deter traders and investors from making bearish bets, according to analysts. That was sometimes achieved by directing state-owned banks to purchase yuan offshore.

The People's Bank of China didn't immediately respond to a request for comment.

Ken Cheung, senior Asian currency strategist at Mizuho Bank in Hong Kong, said tightening offshore liquidity is the most palatable way for China's central bank to stem the yuan's slide, rather than ratcheting up capital controls or directly intervening in the currency market.

"They're just trying to be more subtle than they usually are, using a small hammer rather than a sledgehammer," said Michael Every, senior Asia-Pacific strategist at Rabobank.

He said that while China needs a weaker currency, which could help boost exports, it also wants stability. "They're also worried about the U.S. response, the political aspect of it," he added.

The moves this week came after the People's Bank of China said Sunday that it would reduce the amount of reserves most commercial banks are required to hold by 1 percentage point, freeing up 1.2 trillion yuan (almost $175 billion) cash for banks to lend and help support the Chinese economy.

It was the fourth time this year that Beijing lowered the so-called reserve-requirement ratio for banks. Policy makers have also cut income taxes and encouraged more infrastructure spending at the local level to spur its economy, which has been hit by U.S. tariffs on hundreds of billions of dollars of Chinese goods.

The latest market moves led some analysts to question policy makers' desire to prevent the yuan from weakening to 7 per dollar, a level they have defended at various points in recent years.

The Chinese currency hasn't breached that level in a decade. The worry is that weakening past that mark could reverberate among Chinese residents and companies, leading them to send money offshore. In 2016, the sharp depreciation of the yuan did exactly that.

"What the PBOC has changed recently in terms of its yuan policy is its tolerance of volatility," said Chi Lo, Greater China economist at BNP Paribas Asset Management.

"As long as there's no disorderly decline in the yuan, no massive outflows from China, the PBOC will tolerate further weakness."

Others argue that China could simply continue or tighten its capital controls to prevent cash from leaving the country.

"One should not underestimate the central bank's resolve in this matter, " wrote Luc Luyet, currency strategist at Pictet Wealth Management in a note to clients. "China has set tight capital controls in order to be able to promote a sovereign monetary policy and a stable exchange rate."

Most analysts believe that Beijing isn't pursuing a policy of deliberate yuan depreciation but that the strength of the dollar, trade tensions and slower Chinese economic growth have weighed on the currency.

The yuan has depreciated most rapidly against the greenback this year but is also down against a basket of currencies. The yuan's trade-weighted index has dropped by around 5.6% since its May peak.

Bank of America and J.P. Morgan recently revised their forecasts to reflect more yuan weakness in the coming months as China, citing escalating trade tensions and a divergence between U.S. and Chinese monetary policy.