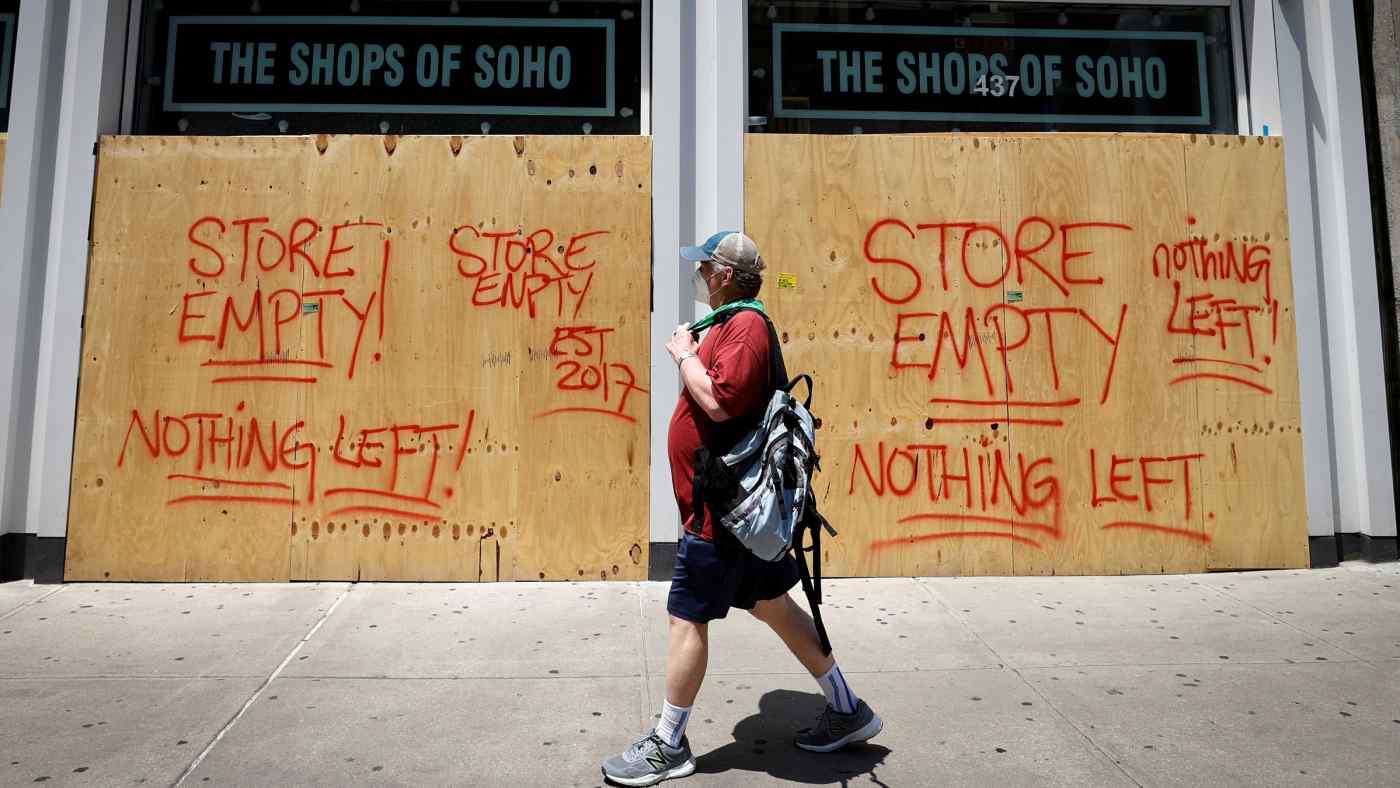 Shops remain boarded up on Broadway days after looting in the area during protests against the death in Minneapolis police custody of George Floyd, in New York City on June 10.   © Reuters
TAKENORI MIYAMOTO and ALEX FANG, Nikkei staff writersJune 12, 2020 04:59 JSTUpdated on June 12, 2020 05:41 JST | North America
CopyCopied

NEW YORK -- Wall Street's magical run came to a crushing end Thursday as fears of a second wave of the coronavirus wiped out any notion of the market's immunity from the economic consequences.

The Dow Jones Industrial Average closed down 1,862 points to 25,128 after spikes in coronavirus infections across the U.S. prompted investors to dump shares in airlines, retail chains and cruise operators that they had heavily bought into.

Chinese stocks on American exchanges were not immune to the broad sell-off, with Alibaba Group Holding losing 3.78%, or nearly $23 billion of its market capitalization.

Nasdaq-listed JD.com, which earlier Thursday priced its much anticipated second listing in Hong Kong at the equivalent of $58.32 per American depositary share, closed at $57.34, 5.70% lower than the previous close.

Nasdaq-listed NetEase was down 4.48% at one point in the afternoon, despite a 5.69% surge in its Hong Kong market debut hours before New York trading started.

The massive sell-off set in as investors' hope for an economic reopening without a resurgence in infections was derailed by grim reality.

Multiple states in the south and west of the country are seeing an acceleration of new cases and hospitalizations, including Texas, the second most populous U.S. state. Investors had hoped that the economy would be able to reopen without seeing a surge in infection.   © Reuters

Texas reported record COVID-19 hospitalizations three days in a row, which hit 2,153 on Wednesday. The state, which now has an estimated 25,000 active coronavirus cases, lifted its stay-at-home order as early as May 1.

Arizona, cited by many experts as the most worrisome U.S. hotspot, confirmed cases have more than doubled since May 15, when the state started reopening, to 29,852 on Wednesday. The state has a population of under 8 million. Nine counties in California, one of the first states to introduce lockdown measures, have also seen a spike.

The selling spree on Wall Street followed trading Wednesday in Europe and Asia where stocks fell almost across the board. The U.S. Federal Reserve's grim economic assessment added to the pressure as well.

Dave Lutz, head of ETFs at JonesTrading, blames Thursday's sell-off on "the Fed’s dire assessment of the economy and a pop in coronavirus cases in the west and south."

Investors are increasingly anxious. The Volatility Index once again exceeded 30 on Thursday. Called the "fear index," a reading above 20 indicates period of market stress.

"With the stock market becoming quite overbought on a near-term basis, we have been saying this week that we expected the stock market to begin a pull-back after the Fed meeting," said Matt Maley, chief market strategist at Miller Tabak. "However, we didn’t expect it to take place quite as immediately as it seems to be taking place this morning."

The banking, energy and manufacturing industries fared worst Thursday since the sectors are exposed to economic conditions. Major banks like JPMorgan Chase led the way downward, losing 6%-7% on the day.

The Fed officials said they would expect to maintain a zero-rate policy until the end of 2022. "The comments regarding yield-curve control could be the reason the dollar continue to weaken, and the market turned lower, particularly banks," said Quincy Krosby, chief market strategist at Prudential Financial.

The risk-off activity spilled into commodities as well. In New York, July futures for West Texas Intermediate crude oil dropped for the first time in three days. On the other hand, the haven asset gold is drawing investor money.