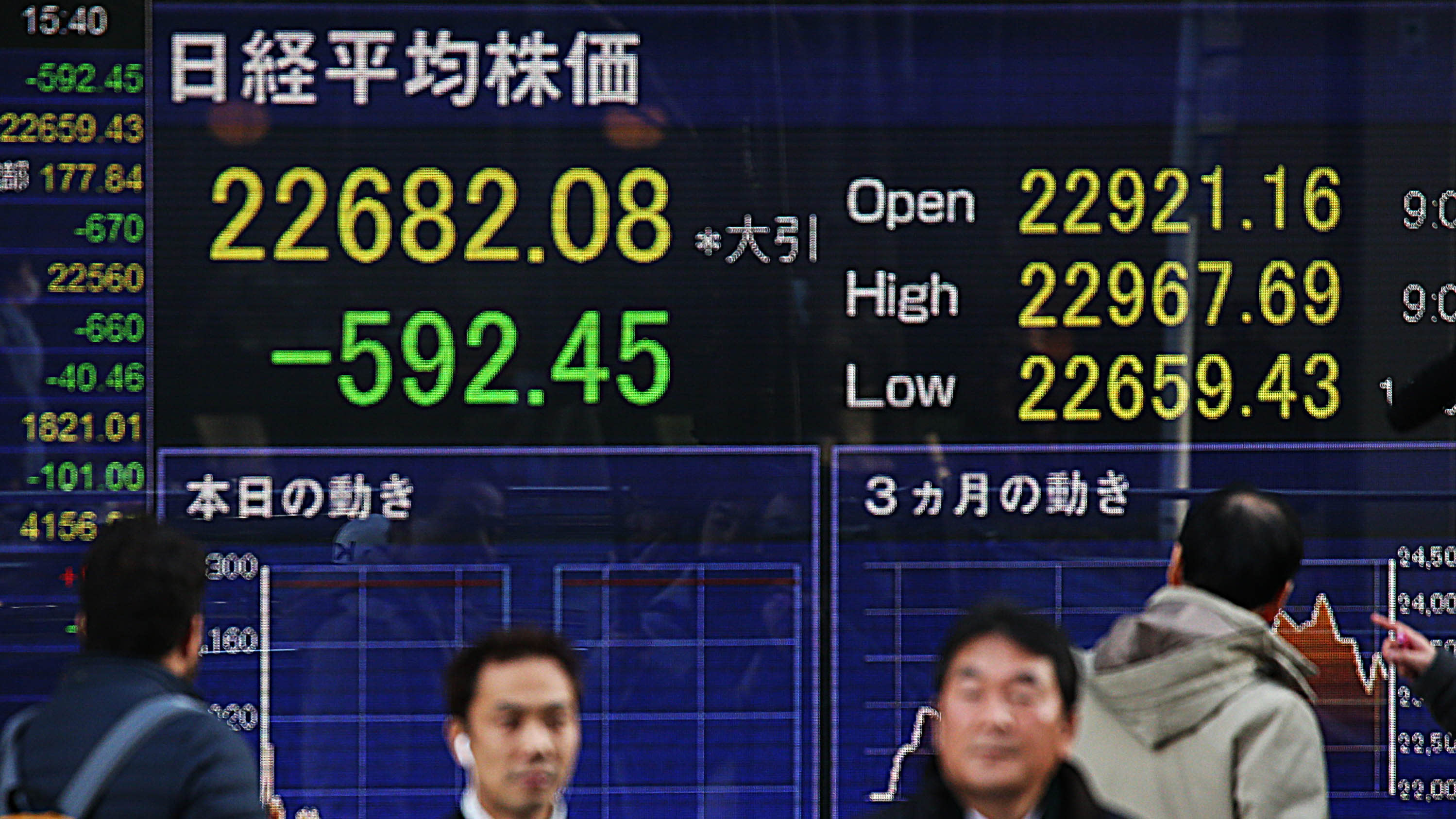 TOKYO -- Asian stock markets suffered a rough trading day on Monday, taking their cue from a widespread selloff on Wall Street before the weekend that was triggered by soaring long-term interest rates.

Among the hardest hit in Tokyo were cyclical businesses and resource-related names, groups that had performed well in recent months on the back of rising expectations that, for the first time in a decade, a synchronized global recovery was underway.

The worst performer of the day among major Asian shares was Japanese electric cable maker Fujikura, which fell by 17%. The company's stock gained 57% last year, but after trading ended on Friday it dashed investor expectations by announcing lower profit estimates for the year ending in March.

Graphite material maker Tokai Carbon was a similar case. Its share price rose 3.7 times last year amid hopes that demand for its materials from Chinese steelmakers would increase. It was the best performer among the Nikkei Average constituent shares last year, but the company's stock tumbled 7% on Monday.

"The markets had been rising at an unsustainable pace," said Mutsumi Kagawa, chief global strategist at Rakuten Securities. "This is a healthy pullback." 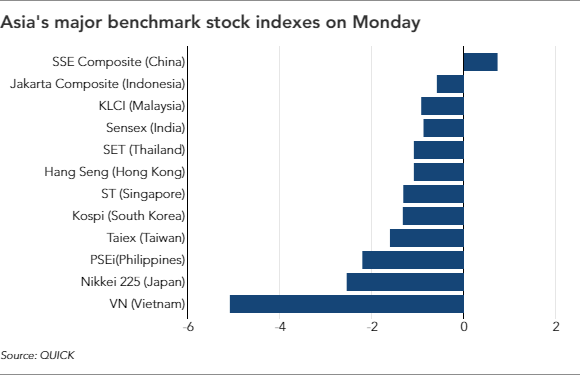 All major Asian markets suffered, with the notable exception of Shanghai, due to its limits on the free flow of funds. The Shanghai Composite gained 0.7%.

Vietnam's VN index, one of the smallest and most volatile in the region, saw the biggest daily losses of 5.1%. In other Southeast Asian and South Asian markets, the Philippines' PSEi gave up 2.2% and Singapore's ST Index lost 1.3%, while Malaysia's Kuala Lumpur Composite Index and India's Sensex Index were both down by 0.9%. Australia's S&P/ASX 200 also dropped by 1.6%.

Some analysts blamed the broad sell-off on moves by investors to lighten their positions ahead of the long market holidays over the Lunar New Year, which begins on Feb. 16 this year. Investors' tendency to unload risky assets before a long holiday might have fueled the selling, especially in Taiwan, South Korea and Hong Kong.

South Korea's Kospi closed at 2,491.75, down by 1.3%. Hanmi Science and Kakao both dropped more than 6% on the country's benchmark index, while Hyundai Heavy Industries and Orion Holdings lost around 5%.

Responding to Monday's market drop, Alec So, associate researcher at Hong Kong-based securities company CLSA, noted that its forecast for the current Chinese Year of the Rooster, using "feng shui" principles, had proved relatively accurate, with a rise in the Hang Seng Index through most of 2017 before a decline at the end of the lunar year. "So today's market slump still matches our forecast" for the Year of the Rooster, he said at the released of its annual Feng Shui Index.

According to CLSA, Hong Kong stocks will be flat in the months leading up to the city's summer season and turn negative in July, but by the end of the Year of the Dog the market will bounce back, ending on a high note. "We expect the Hang Seng Index will have a positive performance" in 2018, So said.

The mainstream view also seems to be that the pullback on Monday did not mark the beginning of a bear market, let alone the end of the global economic recovery.

"When there is a real concern about the global economy, that tends to show up in the performance of Chinese stocks as well as in resource and cyclical stocks," Hikaru Sato, equity analyst at Daiwa Securities, pointed out.

Sato said that the poor showing of resource-related and cyclical businesses in Japan on the stock market on Monday was more of a function of a firmer dollar. Commodities, such as oil and crops, and resources stocks tend to attract investor interest when the dollar is performing poorly. Recently, however, the greenback has been trading firmer, supported by expectations of rising interest rates in the U.S., making dollar assets relatively more attractive to investors, Sato said.

"Ultimately, though, a stronger dollar means a strong U.S. economy, which will be supportive even to resource- and cyclical names in the long-run," he added.

The Dow Jones Industrial Average plunged 665 points on Friday, the largest decline since Dec. 1, 2008. Employment statistics for January had showed the largest rate of increase in eight years, triggering speculation that the U.S. Federal Reserve could raise interest rates faster than previously thought due to the tighter labor market. The yield on the benchmark 10-year Treasury bond at one point climbed to 2.85%, the highest in four years.