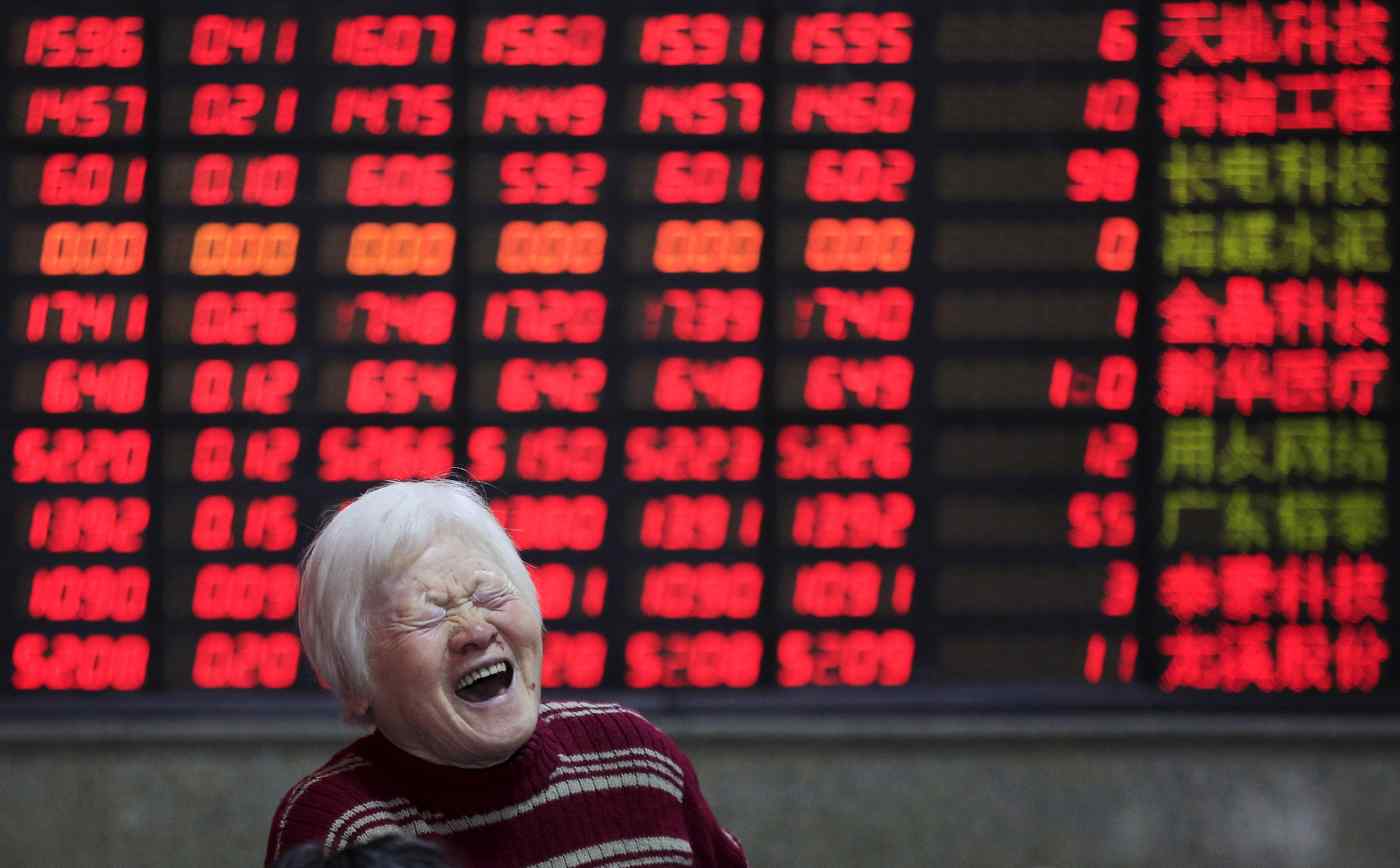 HONG KONG -- More than 200 Chinese mainland-listed stocks will be included in some of the world's most widely tracked benchmark indexes beginning June 1, and billions of dollars will begin flowing into China's domestic markets. But some foreign investors are not in a hurry to rush in, as some fundamental concerns among traders and market watchers over basic market operations remain unresolved.

MSCI, in an initial step, on Friday will partially include A-shares in its MSCI China Index, which comprises Chinese companies trading on overseas exchanges, the MSCI Emerging Markets Index, and other MSCI indexes.

Kweichow Moutai is China's top liquor producer in terms of sales and a maker of the traditional Chinese spirit known as baijiu. State-backed Hangzhou Hikvision is the world's largest supplier of video-surveillance cameras, with more than 20% of the global market, and one of the most valuable tech companies on China's domestic exchanges. Midea is a major Chinese appliance producer, which last year acquired German robotic maker Kuka.

All three companies are listed only on mainland stock markets.

Despite the recognition by MSCI, a prominent U.S. provider of stock market indexes, analysts are warning about the risks of investing in China's $6 trillion onshore equity markets, which includes government-led interventions, a trading suspension mechanism and poor corporate governance.

"Beijing has shown a very strong inclination to make sure that they control the financial markets," Christopher Balding, associate professor of business and economics at the HSBC Business School in Shenzhen, told the Nikkei Asian Review. "As long as that remains the dominate paradigm, it's difficult to see any of these rules changing."

Balding believes that growing international demand for investing in the world's second-largest economy was a key driver behind MSCI's decision to include mainland-listed companies in its indexes, noting that China's financial markets have not seen significant improvement in good practices from a few years ago when MSCI rejected A-share inclusion in its indexes. 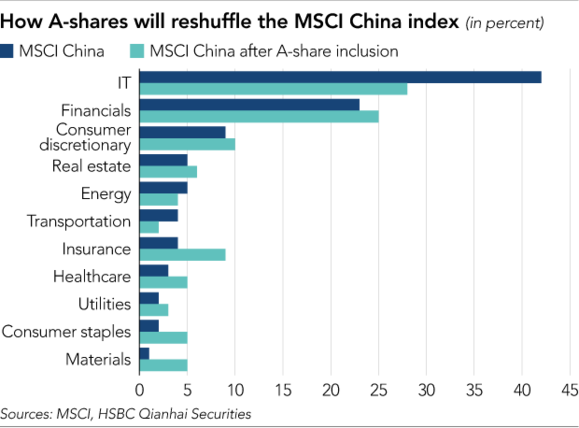 "It is not a problem until it becomes a problem. You either play by the rules, or you go away," Balding said, as investors will have to comply with whatever sudden decisions Chinese regulators make in order to access the lucrative mainland markets.

The two-stage inclusion of A-shares into MSCI's indexes later this year is expected to bring in between $17 billion and $20 billion to China's onshore equity markets over the first year, according to major banks and brokerages. While passive investors are obligated to increase their holdings in A-share companies based on the weightings in the indexes, some active fund managers who track the indexes but do not have such requirements appear not ready to make a move.

Aberdeen Standard Investments, one of world's largest investment houses with over $400 billion under its management, said MSCI's decision will not affect its investment approach to A-shares.

"MSCI inclusion has no practical application for us as a stock-picker," Nicholas Yeo, head of China equities at Aberdeen, said in an email to Nikkei. "It doesn't affect our view of whether a company is good or bad, nor do we feel any need to adjust our portfolios." Instead, he believes the number of investable A-share companies remains limited for now.

"Mainland firms have much progress to make in terms of financial transparency and investor protection. Many have too short an operating history for us to gain comfort in their track record," he said.

Still, Aberdeen is expanding its research and coverage of A-shares, Yeo said, as mainland equity markets are becoming increasingly difficult for international investors to ignore.

Navigating China's volatile markets has always been a challenge for fund managers. That holds especially true for foreign investors who often find themselves playing by a set of different rules in China, where regulations can be fluid.

That has turned off some potentially important investors, including the California State Teachers' Retirement System, or CalSTRS, which has said it has no plans for now to invest in A-shares.

Christopher Ailman, chief investment officer at the $224 billion fund, told the Hong Kong Economic Journal in a recent interview that the level of corporate governance of Chinese companies was worrisome, and that share prices are too volatile because markets are dominated by retail investors. He told the Chinese-language newspaper that for the time being he will just observe the situation.

Despite the concerns shared by some large investors like Aberdeen and CalSTRS, many analysts see the MSCI inclusion as an opportunity for Chinese companies to align their corporate governance practices with international standards, laying the groundwork for deeper market liberalization in China.

"For Chinese companies who want to be included in MSCI's indexes, they need to improve their practices," said Tai Hui, chief market strategist for Asia at JPMorgan Asset Management, which would mean disclosing information for investors in line with other mature markets. Moves like that would help to raise standards over time and lift investor confidence in Chinese markets, he said.

Poor corporate governance has been a chronic problem among many Chinese companies.

An MSCI report last year on corporate governance in China identified several major areas of concern, including a lack of an independent chair and board majority, controlling shareholder and related party transaction conflicts, and limited protection rights for shareholders. The report also said that some Chinese companies use a variable interest entity structure -- related to the control of a company -- which it considers to favor the founders over other shareholders, and "ownership risk is increased due to legal uncertainties." A JPMorgan Asset Management spokeswoman said the company has seen a significant increase of funds into its China A-share portfolios since last year, when MSCI announced its intention to include mainland-listed companies.

Still, greater transparency and policy certainties will have to be achieved before China's domestic markets take off globally. Foreign ownership of China's onshore market stood at 2.7% as of this month, lagging behind other major Asian markets, according to Citi Research. That compares with 26.3% for Taiwan, 30.1% for Japan and 33.7% for South Korea, the report said.

"You probably won't see a massive influx of international capital on Day 1," Hui said. "More market liberalization is needed for that to happen."

The Chinese government's ability to impose restrictions on stock trading in China without prior notice or public discussion remains a significant concern.

During China's stock market crash in 2015, more than half of the 2,800 companies listed on the Shanghai and Shenzhen exchanges were able to suspend trading of their shares through a stock suspension mechanism that allows companies to apply to regulators for a trading halt.

Such moves could severely hinder fund managers' ability to trade stocks for their clients or find a clear market direction.

"Unless China makes more progress on the suspension side of things ... it may take a while before MSCI would fully include A-shares," said Jason Lui, Asia-Pacific head of equity and derivatives strategy at BNP Paribas. "We believe regulators and exchanges have done a lot of work addressing that issue, but there still is a gap between the China practices versus the rest of the world."

While the initial steps are small given the size of China's economy, MSCI has signaled that further action will be taken only if China's government makes significant improvements on market liberalization.

"We don't want to go on a small step at a time and drive the process crazy," Henry Fernandez, MSCI's chief executive, said in an interview on Bloomberg TV last week. "Our plan is not to go 5%, 7%, 12%, 15%. It has to be sizable steps. Therefore, the [market] conditions need to be there to go to that sizable step."