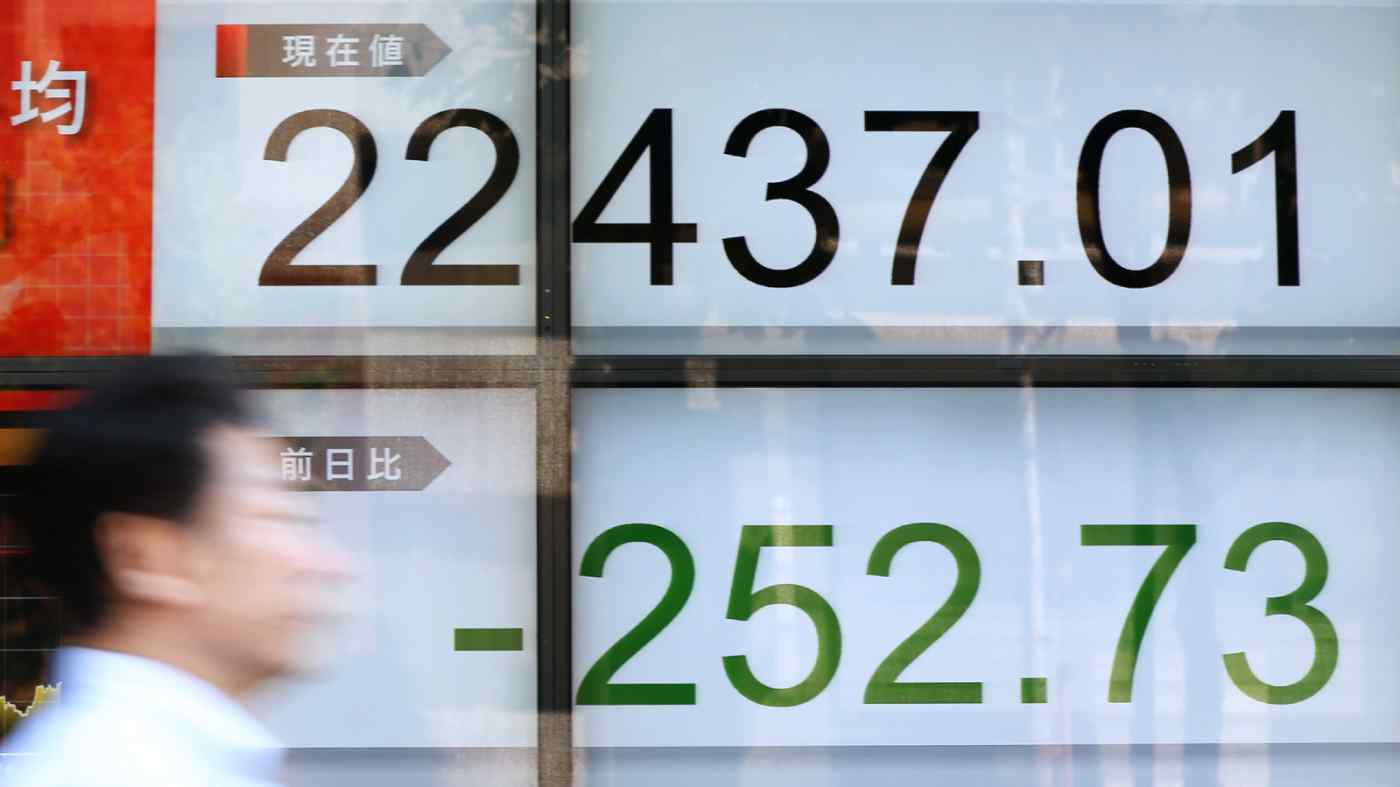 The Nikkei Stock Average has fallen by over 500 points in the past three sessions, mainly due to risk stemming from the U.S. (Photo by Rie Ishii)
Nikkei staff writersMay 25, 2018 02:05 JST | Japan
CopyCopied

The Nikkei Stock Average closed down 1.1% from the previous day at 22,437, falling by more than 200 points for the second straight session and dropping about 560 points over three trading days. The yen's appreciation also hurt heavy exporters. Foreign investors led the shift to a risk-off mood, marking a turnaround in an upward trend since March powered by short covering.

Automakers and machinery companies were the hardest hit by sector. Shares of Toyota Motor, the world's third-biggest automaker, had largely been on the rise since a May 9 earnings release that beat market expectations, but slumped 3.3% at one point Thursday, all but erasing its recent gains. Compatriots Honda Motor and Nissan Motor weakened as well.

Officials in Japan and China have pushed back fiercely against reports that the Trump administration is weighing hiking imported vehicle tariffs to as much as 25%, up from the current 2.5%.

Some were more sanguine. Masahiro Ichikawa at Sumitomo Mitsui Asset Management said Japanese automakers "have been producing more in the U.S., so this should be easy to swallow."

Even before Trump backed out of June's planned North Korean summit with counterpart Kim Jong Un on Thursday, doubts over whether the meeting would take place put investors on guard and fueled the yen's appreciation against the dollar. That cut into prospective earnings for export-focused companies, such as industrial robotics maker Fanuc, whose shares suffered their worst nosedive in a month.

Meanwhile, the Nikkei Volatility Index reached 16.96, its highest reading since April 18, pointing to growing uncertainty in the market. Institutional investors and other players tend to trim their buying when there are strong undertones of volatility.

There will likely be "a temporary speed adjustment," said Ichikawa. "Until July, when April-June earnings come out, the 23,000 mark will be thought of as a ceiling" for the Nikkei index.

But Thursday's downswing tapered off somewhat by closing time. Many see underlying optimism for gentle economic growth worldwide, and for stronger earnings among Japanese businesses, keeping the decline limited. Heavy futures selling by short-term speculators is shaking the market, but if such activity calms down, "stocks should get back on a growth track before autumn," said one investment firm official.