So who were the winners after tumultuous week? TOKYO -- Darkness often makes the stars stand out more. As the shades of black market sentiment fell this week, there were some stocks which shone.

On Friday the stock market ended the week with another massive decline. Growing inflation expectations in the U.S. continued to push up the long-term lending rate, raising concerns among investors that the U.S. Federal Reserve may increase the policy rate more rapidly than previously expected. Money kept fleeing from risk assets, including stocks.

There were voices, especially from economists, saying that the world's economic fundamentals remain sound, and the market turmoil was merely a result of a U.S. stock market correction passed on to other markets. 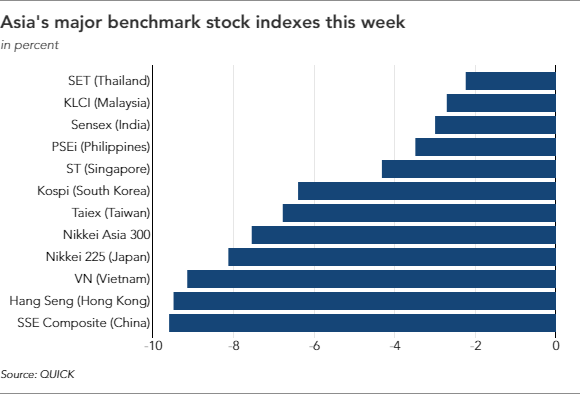 Societe Generale's global chief economist Klaus Baader said the "U.S. stock market has to correct 20% to 30% over six months in order to have significant negative impact on the world economy." The U.S. Dow Jones Industrial Average has fallen just over 10% from its recent peak.

Yet traders' sentiment is certainly weak, amid fears that the recent drop has gone beyond a healthy correction. "I know it's a perfect day for bargain-hunting, but I am still dithering," said a trader from a Japanese regional bank.

As if they all woke from the previous euphoria, "suddenly investors are looking for flaws instead of opportunities," said Tetsuo Seshimo, portfolio manager at Saison Asset Management.

Against such headwinds, there were stocks which managed to perform decently. Some 34 stocks, or 6% of the more than 500 constituents of the Nikkei 225 and Nikkei Asia 300 indexes, ended the week positively.

Philippine casino resort operator Bloomberry Resorts gained the most, up over 9% on the week ahead of its fourth-quarter earnings results. Indian pharmaceutical companies such as Dr. Reddy's Laboratories, Cipla and Sun Pharmaceutical Industries bounced back from the previous week's losses on Dr. Reddy's weak quarterly results.

Taiwanese apparel maker Eclat Textile, a key supplier to Nike and Under Armour, was up over 3% due to a revenue surge in January. Strong New Year sales in the U.S. pushed its monthly revenue to the highest since Nov. 2016.

The losers were more volatile. China's Leshi Internet Information & Technology performed the worst for the second consecutive week after it flagged its first annual net loss last week. The stock, which was down over 40% last week, lost another 30% this week.

With investors' fearing that the market turmoil may lessen the wealth effect and hurt demand, Japanese raw materials and components manufacturers dropped substantially. Cable manufacturer Fujikura and glass substrate manufacturer Nippon Electric Glass were both down over 20%, due to the weak outlook.

Investors expect the bumpy stock market ride to continue. Takuya Takahashi, strategist with Daiwa Securities, raised January U.S. inflation data as the important factor to watch, since the market's inflation expectations have been key during the turmoil. The data is to be released on Feb. 14.