Bauernfreund said that TBS behaved more like an amateur fund with a small broadcasting business. He pointed to the fact that roughly 40% of TBS' over 700 billion yen ($6.6 billion) of net asset value comes from its stock holdings. Another 40% comes from real estate. Operating businesses generate only little more than 10% of its entire net asset value.

Bauernfreund said that TBS "has no fundamental business relationship" with 72% of its securities portfolio and that there was "no rational reason" to have those stakes on the balance sheet. He said that TBS investors were unfairly exposed to risks faced by Tokyo Electron and Recruit Holdings. 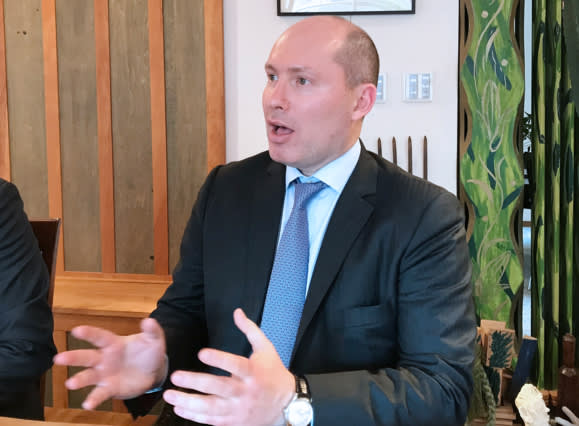 Asset Value Investors bought into TBS in January 2017, and currently owns 1.7% of the broadcaster. Since then, it has sent four letters to TBS, and received two replies which Bauernfreund described as "benign" but "superficial."

The two parties have met a few times. The most recent encounter on Wednesday gave him impression that "TBS is taking our suggestions seriously, but at the same time they do not appear to be willing to sell down the securities portfolio."

A TBS investor relations staff said that the broadcaster had been communicating sincerely with the investment fund as it had with other large shareholders. TBS held the stance that a large part of its shareholding was necessary as those assets lend stability to its fiscal position.

Asset Value Investors' action comes amid a push for greater corporate governance in Japanese companies. Prime Minister Shinzo Abe's administration implemented a governance code in 2015, which had strongly encouraged corporations to increase capital efficiency and to become more transparent and responsive to shareholders.

However, governance reforms have been slow, and structural inefficiencies of large corporations persist. "Lots of Japanese companies worry about rainy days," said Bauernfreund. "They are worried about having cash or assets to fund all the M&A plans that they have and never actually seem to come to fruition."

The administration had also promoted a stewardship code, which requires institutional investors to disclose voting records and establish governance structures to act in the best interest of stakeholders. Sumitomo Mitsui Banking Corp., as of March 2017, was one of the large shareholders of TBS. Its parent Sumitomo Mitsui Financial Group had openly stated it would sell its strategic shareholdings unless there was good reason for holding them.

"Releasing some of the value trapped in TBS's balance sheet will narrow discount and create value for all shareholders, not only ourselves," Bauernfreund said. TBS shares closed at 2,221 yen on Friday, down 21% from end-December, underperforming the 6% fall in the broader Nikkei Stock Average. Its market capitalization stands at 388 billion yen, just over half its net asset value.

Asset Value Investors says it is indifferent as to whether TBS returns are distributed as share buybacks or dividends, as long as the broadcaster agrees to sell down. When asked what he thought was the strength of TBS' operating business, he said it was "hard to say." Whether Asset Value Investors would hold onto their TBS shares after its demand was accepted "depends on how the valuation goes."

There are 17 other Japanese stocks in the portfolio of Asset Value Investors. "All of them have got balance sheets laden with surplus cash," said Bauernfreund. "Potentially there could be other opportunities for us to engage."

In Asia outside Japan, the fund is invested in Hong Kong-listed Swire Pacific and Singapore-listed Jardine Strategic, family-controlled diversified investment companies which are also traded at a discount to their net asset values.

The boutique fund takes a slightly different approach in the rest of Asia. It engages in actual debate with boards about what they can do to improve governance, disclosure, and transparency in order to allow the market to fully recognize their value.