TOKYO -- Seeing last month's market declines as an opportunity to get a good deal on their own shares, companies in Japan and the U.S. are buying back stock at a rapid clip.

Markets around the world plunged in February after U.S. jobs data for January showed strong wage growth, reinforcing the likelihood that the Federal Reserve will be more aggressive in raising interest rates this year.

Japanese beverage group Kirin Holdings said Feb. 14 that it will repurchase 100 billion yen ($946 million) of its stock, or 5% of the shares outstanding. The stock rose as much as 8% the next day. Mobile phone carrier NTT Docomo has bought back 48 billion yen worth of shares, and Astellas Pharma has spent 38 billion yen acquiring its shares.

Buybacks are similar to dividends in that they are used for returning corporate profits to shareholders. But one key difference is that the stock price at the time of purchase determines the number of shares bought back: the lower the price, the more shares acquired. Companies view buybacks, therefore, as a way to signal to investors that the shares are undervalued. 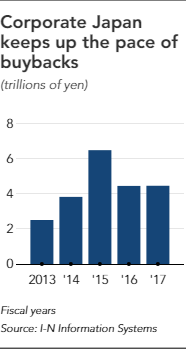 As of Thursday, corporate Japan had announced 4.47 trillion yen in buybacks for the year ending this month, eclipsing the year-earlier level, according to financial data provider I-N Information Systems.

Tax cuts under the Trump administration are encouraging American companies to bring funds parked overseas back home. Networking equipment developer Cisco Systems, which plans to repatriate $67 billion to the U.S., has expanded its buyback plan by an additional $25 billion.

Corporate buybacks in the U.S. reached a record high in the first half of February, said Goldman Sachs' Neil Kearns. S&P 500 components are expected to beef up their repurchase programs by 23% to $650 billion in 2018, the brokerage estimates.