U.S. and Chinese tech names are popular because investors expect the trends hastened by the pandemic will continue even after the novel coronavirus is brought under control, an analyst says. (Nikkei montage/Source photos by Reuters)
AKIHIDE ANZAI, Nikkei staff writerJuly 9, 2020 19:00 JST | China
CopyCopied

TOKYO -- U.S. and Chinese information technology champions, Apple and Alibaba Group Holding among them, have seen their market values jump in the first half of 2020 as the COVID-19 pandemic set off wild gyrations in global stock markets.

As the U.S. and China vie for strategic dominance, the two countries' IT standard-bearers are waging their own fight for industrial leadership.

The U.S. Nasdaq market reached new heights in early July, led by big American IT companies. Apple, Microsoft, Amazon.com, Google parent Alphabet and Facebook sit atop the global market capitalization ranking. Their combined market value in early July, at $6.5 trillion, was higher than the total value of all listed companies in Japan.

Leading Chinese IT companies are also pulling in cash from investors. Tencent Holdings has jumped more than 60% from its low in March, while Alibaba has risen 50%.

U.S. and Chinese IT names are popular because investors expect the trends hastened by the pandemic will continue even after the novel coronavirus is brought under control, said Fung Wang Yuen, chief investment officer at China Rise Securities Asset Management in Hong Kong.

In the January to March quarter, for example, Amazon logged a 26% year-on-year rise in sales to $75.45 billion, a record for the three-month period, as more people shop at home to avoid COVID-19.

As of the end of April, Microsoft's Teams business chat platform was used by 75 million people per day, roughly four times as many as last November. The company's sales rose 15% in the first quarter of 2020, helped by the strong performance of its cloud business. 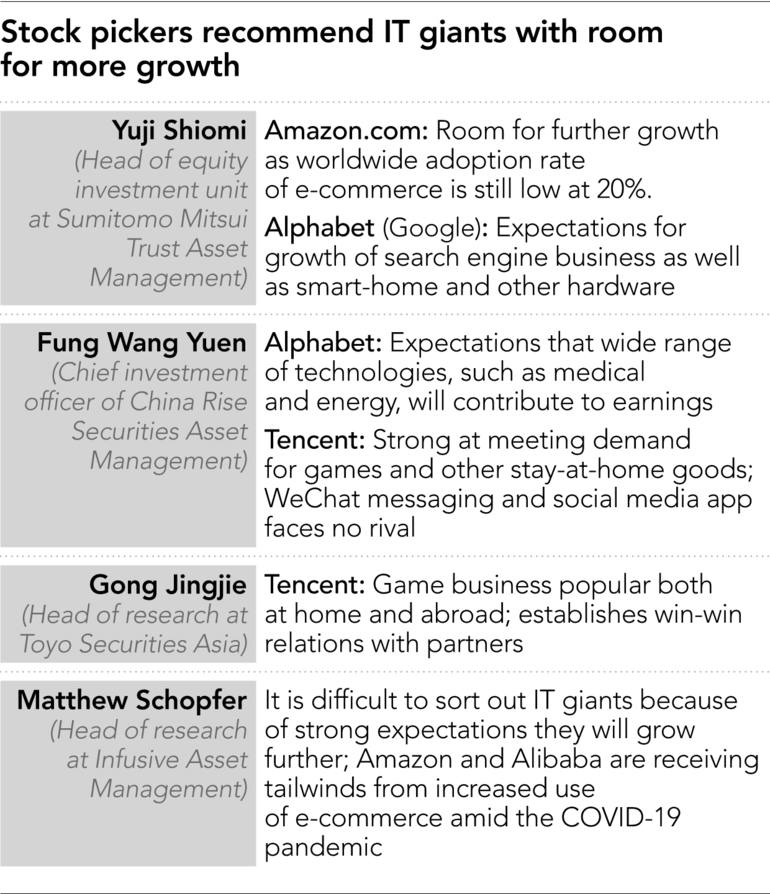 Big Chinese IT companies, for their part, are helped by government policy in China. Tencent, for example, has developed a smartphone app to monitor people's movements via GPS as the authorities work to contain COVID-19. The app is now used by 1 billion Chinese.

Tencent said in May that it will accelerate investment in cutting-edge technologies such as artificial intelligence, the Internet of Things and 5G for mobile networks. It plans to spend 500 billion yuan ($70.75 billion) over the next five years to develop cloud and other IT infrastructure.

Following the announcement, Tencent decided to raise $6 billion through a corporate bond issue, the biggest fundraising in Asia so far this year.

The Chinese government's desire to get its economy moving quickly in the wake of the pandemic has given Tencent a push.

So who will come out on top in global technology battle? U.S. companies are far ahead of the Chinese in terms of sales and user numbers in developed nations. But in Southeast Asia other emerging markets, Chinese companies have greater room for growth and the "growing global middle class is tailwind for them," Jenny of Infusive said.

Amazon is the biggest e-commerce company in Japan, the U.S. and Britain. But Chinese companies as a whole have captured more than half the market in Indonesia, the most populous country in Southeast Asia, through investment in local companies such as Tokopedia, according to British research company Euromonitor International.

Competition between U.S. and Chinese IT companies is heating up new areas such as telemedicine, online learning and autonomous vehicles.

Among American tech leaders, Amazon is beloved of investors because for its focus on two areas: rapidly expanding e-commerce and a cloud business that generates steady earnings. The company's "path toward sales growth is highly visible," Shiomi said.

But some analysts consider Amazon shares overvalued. Its price-earnings ratio has climbed to around 130, with its shares up 60% from their mid-March low. Apple and Microsoft's P/E ratios are around half that.

Shiomi is cautious about Apple, saying the company's "heavy reliance on hardware is a matter of some concern."

Alibaba and Tencent, for their part, are building an "Alibaba economic zone" and a "Tencent economic zone" through aggressive acquisitions and tie-ups at home and abroad. "While Alibaba gains controlling stakes, Tencent pursues more moderate tie-ups, such buying minority stakes, said Gong Jingjie, head of research at Toyo Securities Asia.

Tencent, whose WeChat messaging and social media app has more than a billion users, is trying to strengthen the platform by incorporating services from partners.

Investors see Google's diverse operations as a strength. Although its adverting business is dealing with plunging ads from restaurants, tourism-related companies and others, hopes are high for growth in subsidiaries active in health care, energy and other budding technologies, said China Rise's Fung.