Speculators are becoming cautious about buying high-yield, emerging-market currencies as the U.S. prepares to end its quantitative easing program. 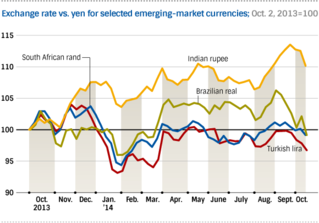 Buying of these currencies, which had been popular among individual investors in the rich world, appears to have run its course for now. Amid falling prices for oil and other resources, the Brazilian real has tumbled nearly 7% from its September high. The South African rand is off almost 5% from its peak in December 2013.

One currency that is bucking the trend is the Indian rupee. Although it is still relatively weak, it has risen about 10% against the yen over the past year. The Indonesian rupiah and the Thai baht are also firm against the yen. Emerging-market currencies are no longer moving in lockstep.

This divergence is driven by economic fundamentals. The Brazilian economy is in need of speedier reform; last year, its current-account deficit reached 3.6% of gross domestic product. South Africa's deficit has ballooned to almost 6% of GDP, according to an estimate by the International Monetary Fund, and the country's public debt is growing. In India, by contrast, the current-account deficit shrank to a little less than 2% of GDP in 2013, while Thailand is expected to run a surplus this year.

Domestic politics is another big factor affecting the foreign exchange market. In Brazil last summer, there were large-scale demonstrations before the World Cup soccer tournament, as people took to the streets to complain that the government should focus on their needs rather than a sporting event. Turkey also saw massive anti-government protests last year, but the turmoil began to subside after Recep Tayyip Erdogan was elected president. In India, Raghuram Rajan became governor of the country's central bank in the autumn of 2013 and has since taken steps to curb inflation. The election of Narendra Modi as prime minister in May has given the rupee another lift, thanks to his outward-looking economic policies.

External factors, too, impact the currency market. "Attention should be paid to economic conditions not just in emerging economies but also in the industrialized world, as well as developments in the commodity market," said Osamu Takashima, chief foreign exchange strategist at Citigroup Securities. One such factor is an increase in U.S. interest rates that could come as early as next year. The U.S. Federal Reserve is expected to end its bond-buying, quantitative easing program by the end of October, although it is unclear when the Fed will move to raise interest rates, which are now near zero. Hidenori Suezawa, an analyst with SMBC Nikko Securities, said the U.S. central bank will likely hike rates in mid-2015.

Until recently, investors have poured their money into the higher-yielding currencies of emerging economies, as rates in major industrialized countries such as the U.S., Japan and Germany stayed low. If the U.S. lifts interest rates as its economy improves, the dollar is expected to strengthen. This will lure investment capital away from emerging economies, pushing their currencies still lower. Should that happen, prices for crude oil, iron ore and other commodities -- which are largely quoted in dollars -- could fall further, piling pressure on the currencies of emerging economies, many of which are resource and agricultural exporters.

"The fluctuations of emerging economies' currencies have been magnified," said Ryutaro Kono, chief economist at BNP Paribas Securities (Japan). He added that in general those currencies are undervalued. The big emerging economies saw exchange rates begin to slide in the summer of 2013, but the rupee and rand appear to have leveled off.

Some market watchers say currency markets in emerging economies could reach a turning point in 2017. They will likely have until then to carry out structural reforms; otherwise money will start flowing back to the rich world, which would depress their currencies and could undermine their economic stability.

Investors face a quandary over whether to pull their money from emerging economies or to double down on their long-term growth potential through investment trusts. If developed countries begin to recover in about three years, Japan and Europe will probably curtail their monetary easing, luring money back to the developed world.