TOKYO -- Japanese companies are stepping up their aggressive global expansion moves, a trend that is likely to place more selling pressure on the yen. The big question: How big will the yen sales be? 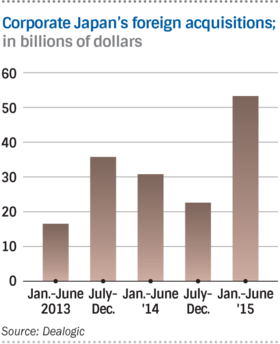 Japan Inc.'s overseas buyouts so far this year total nearly $60 billion, or roughly 7.2 trillion yen. According to one estimate, half of that amount in yen -- 3.6 trillion yen -- will be sold to fund the deals, possibly within the next six months. That is equivalent to the amount of yen being sold by institutional investors.

The Japanese currency has weakened by more than 40 yen against the dollar over the past three years. The slide has made overseas takeovers more expensive than they should be. But many companies have few other growth options. Mizuho Bank's Daisuke Karakama said the shrinking domestic market is forcing Japanese companies to look abroad for new sources of revenue.

So far this year Japanese companies had spent $59.9 billion on 344 foreign takeover deals, according to a survey by U.S. market research company Dealogic. That is about half the recent annual high of $110.8 billion, logged in 2012, when mobile carrier SoftBank grabbed headlines by snapping up major telecom carrier Sprint. 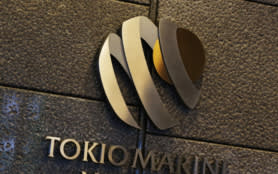 In January, Japanese trading house Itochu announced that its 50-50 joint venture with Thai conglomerate Charoen Pokphand Group will invest $10.3 billion in a unit of China's Citic Group. In June, insurer Tokio Marine Holdings said it will acquire a U.S. peer for $7.5 billion. The following month, Meiji Yasuda Life Insurance said it was purchasing a 100% stake in a U.S. midsize life insurer for $4.9 billion. And on Thursday, Japanese media group Nikkei said it was acquiring the FT Group, publisher of the Financial Times newspaper, for 844 million pounds ($1.3 billion). In each sector, these were the biggest takeover deals.

Mitsubishi UFJ Morgan Stanley Securities' Daisaku Ueno said insurers and many other types of companies are gobbling up overseas businesses to cope with Japan's shrinking population, which is hurting industries driven by domestic demand. The analyst said that because such companies generally do not have large foreign-currency reserves, about half of overseas buyout deals coming from Japan place selling pressure on the yen. He added that this was a conservative estimate.

According to Japan's Ministry of Finance, investment trust managers and other major institutional investors were net buyers of foreign securities for the six months through June, with purchases exceeding sales by 3.6 trillion yen. Likewise, net purchases of foreign securities by trust banks -- which trade stocks on behalf of public and corporate pension funds -- stood at 4.6 trillion yen. That said, pension funds and other institutional investors tend to buy yen futures contracts as well to hedge against foreign-exchange losses. As such, their actual yen-selling pressure is estimated to be limited to some trillions of yen.

Institutional investors typically avoid investing in foreign bonds when the yen falls rapidly against other currencies, because a sharp rebound in the Japanese currency would bring huge foreign-exchange losses. On the other hand, direct investments, such as takeovers, are based on medium- and long-term business strategies and are not dependent on the outlook for the yen rate.

An official at a Japanese bank said the latest spate of big foreign takeover deals will undoubtedly increase selling orders for the yen, even though the currency is moving at around a 13-year low against the dollar.