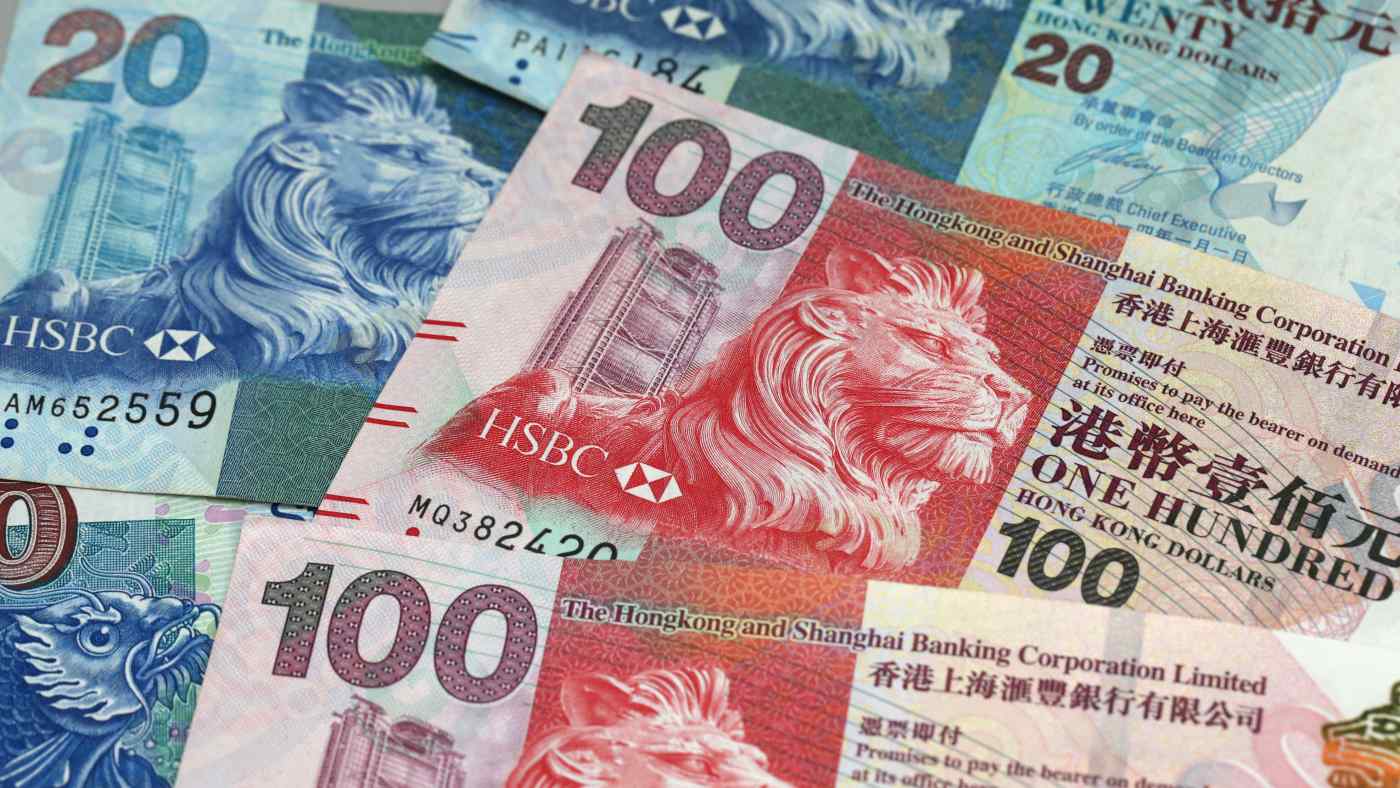 HONG KONG -- The Hong Kong dollar hit its weakest level against the greenback in a decade on Tuesday, as flush liquidity continued to curb Hong Kong money market rates and spurred carry-trades for the higher-yielding dollar and yuan.

The local currency, pegged at 7.75-7.85 to the dollar, edged beyond 7.82 for the first time since August 2007, when the U.S. subprime mortgage crisis erupted. It breached the mid-point of the trading band in June, after a sustained devaluation since January.

The Hong Kong dollar is one of the few currencies in the region that has devalued against the U.S. dollar year-to-date, along with the Philippines peso and Sri Lankan rupee. It has so far weakened by 0.89%, while the Japanese yen and Australian dollar have risen 5.4% and 9.76% respectively.

"The recent weakness in [the Hong Kong dollar] is clearly a 'pricing phenomenon' on the back of a continued widening in the interest rate differential between the U.S. and Hong Kong," wrote Irene Cheung, senior strategist for Asia at the Australia and New Zealand Banking Group, in a note on August 4.

Cheung ruled out the possibility that Hong Kong dollar weakness stemmed from pressure for asset disposals, given the current boom in both property and stock markets. She pointed toward rising demand for the U.S. currency in the city.

Up to HK$112 billion worth of Hong Kong currency was sold for the U.S. dollar between January and April, estimated Ronald Man, rates and foreign exchange strategist at Bank of America Merrill Lynch. Man suggested that such U.S. dollar funds were then converted into the yuan for loans.

"Capital control in China has been very effective in taming the currency. This has probably made banks in Hong Kong more willing to increase their yuan exposure," Man told the Nikkei Asian Review. The Wall Street bank has recently revised its forecasts for the yuan to reach 6.9 against the U.S. dollar at the end of this year, from 7.05 previously. 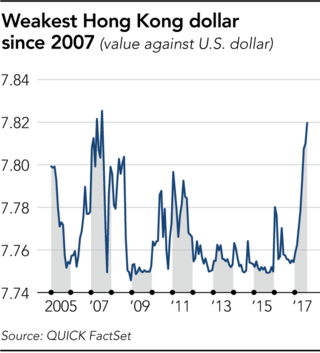 "At the heart of the desire is yield," said Man, expecting the Hong Kong currency to reach 7.83 to the dollar by the end of this year. "As interest rates in Hong Kong stay low, banks will look elsewhere for higher returns." The 3-month Shanghai interbank offered rate was at 4.2735% on Tuesday, well above the comparable interest rate in Hong Kong.

But for the Hong Kong dollar to hit 7.85 to the greenback, Man said the Fed "would need to surprise the market on the hawkish side." He believed the Hong Kong dollar will depreciate more slowly against the greenback more slowly in the next few months than in the first half, when the Fed caused the market to expect three rate hikes and balance sheet reduction this year.

The Hong Kong dollar was pegged to the U.S. dollar in 1983, when confidence over the then British colony was shaken as talks proceeded on handing over the territory to mainland China.

The current currency board arrangement requires the Hong Kong Monetary Authority, the city's de facto central bank, to influence domestic money supply whenever the currency hits the margins of its convertibility zone. It also requires the city's base lending rate to be in lockstep with the Fed's.

Market observers generally do not expect the HKMA to mop up liquidity pre-emptively by issuing exchange fund bills and notes, as that would erode confidence in the peg. The 12-month forward trading between U.S. dollars and Hong Kong dollars remained in the lower half of the convertibility range.

"Among various factors, we believe the ample liquidity in the HKD interbank system has contributed to relatively low levels of HKD interbank rates as compared to their USD counterparts," said an HKMA spokesperson.