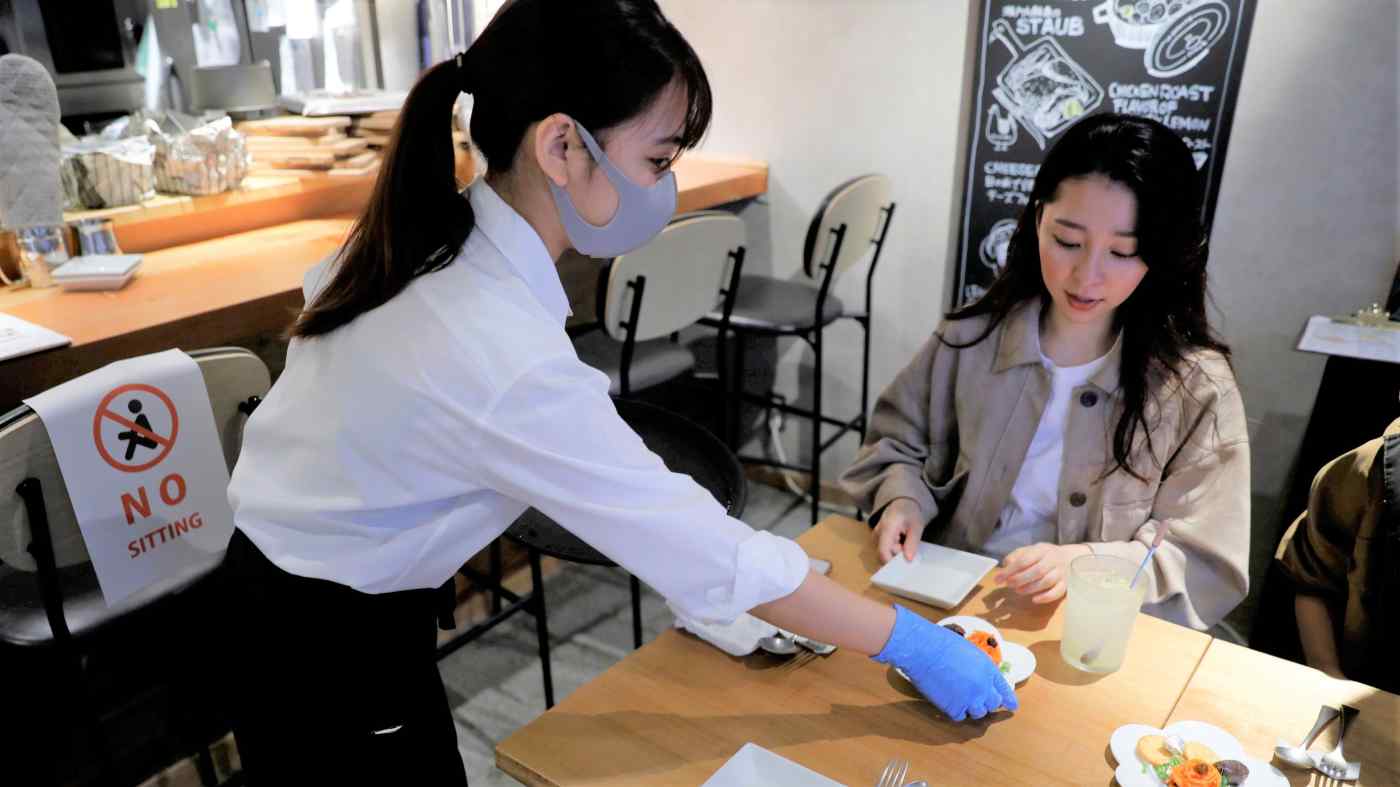 BANGKOK -- Malaysian glove makers are among the few companies whose shares are benefiting from the novel coronavirus pandemic, as Asia demands higher standards of public hygiene.

Malaysia's two big glove makers both saw triple-digit rises in their share prices for the six months ending June. Top Glove emerged as the biggest winner on the local stock exchange, the shares skyrocketing 242.6% in the last six months.

Surging demand for medical gloves due to the pandemic fueled investors' appetite for the stock. With good reason: Top Glove had a net profit of 575 million ringgit ($134 million) in the nine months through May, nearly double the figure for the same period the previous year.

Top Glove Executive Chairman Lim Wee Chai told the Nikkei Asian Review that global demand for gloves is estimated at 306 billion pieces this year, up 20% from the previous year. The company expects to capture 35% of that market, Lim said.

Even as the company rakes in cash, it is struggling with an acute shortage of talent. Malaysia closed its borders on March 18, cutting off Top Glove's access to foreign labor. "We are hiring local workers as there is a critical shortage," said Lim. Rival Hartalega Holdings has also benefited from extra demand arising from the pandemic. The company created the world's first lightweight nitrile glove in 2005, which set off a shift from natural latex to nitrile gloves around the world. The company's installed capacity is expected to increase to 43.7 billion pieces annually with the commissioning of its seventh plant as early as the end of this year.

Five South Korean stocks are also among the top 10 gainers in Asia. Internet services company Kakao saw its shares jump 74.3% in the first half of 2020, as the company benefitted from people stuck at home reading its webtoon online comics, playing its games and using its internet banking services in greater numbers.

South Korea's second-largest internet company has expanded into the public sector, with plans to launch tax payment and electronic document services next year, in cooperation with the government. "We will closely cooperate with the Ministry of the Interior and Safety for digital innovation in government," said CEO Yeo Min-soo in a statement.

Shares of biopharmaceutical company Celltrion climbed 69.1% in the first half of the year, amid rising hopes for a possible COVID-19 treatment. Celltrion announced in early June that it succeeded in the first phase of animal testing for a COVID-19 antibody treatment developed in collaboration with Chungbuk National University College of Medicine.

Celltrion is ahead of its South Korean peers in this area, said Lee Tal-mi, an analyst at SK Securities. Celltrion plans to invest 300 billion won ($250 million) in the project, in cooperation with the Korea Centers for Disease Control and Prevention.

While the shares that have rallied have found ways to excel amid the pandemic, the biggest losers are in industrial sectors that have come under downward pressure across the board. The energy sector in Asia took a dive as fuel demand collapsed in the region, along with economic activity. 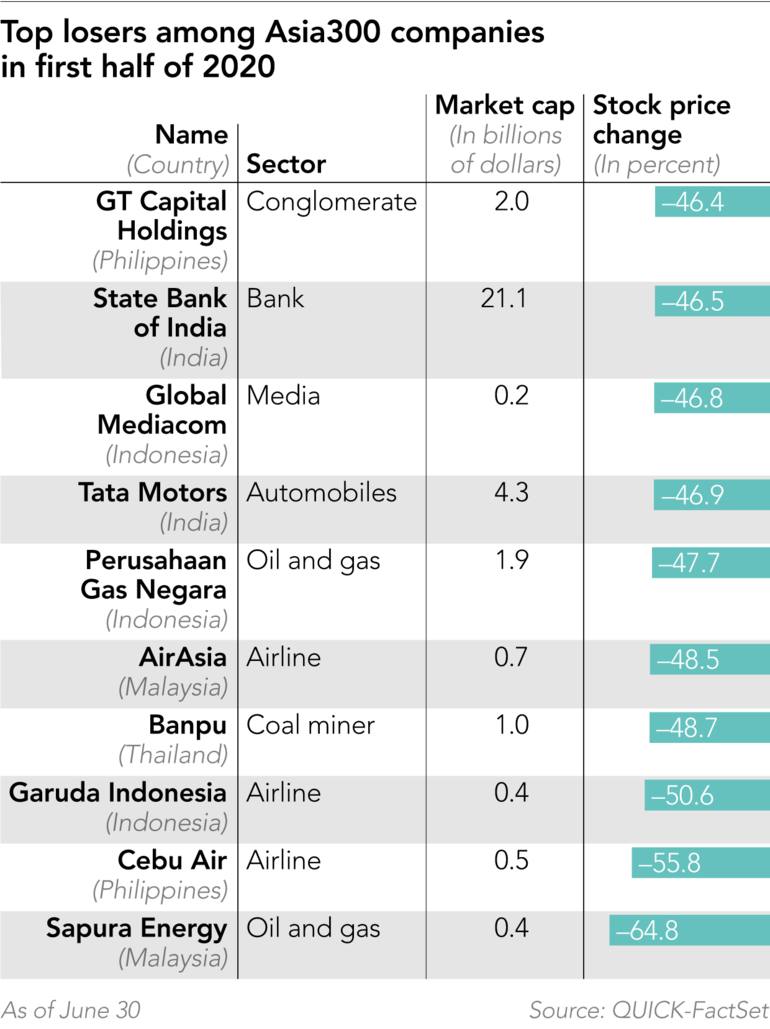 Indonesia's state-owned gas distributor Perusahaan Gas Negara fell 47.7% in the first six months of the year. The company's revenue and net income fell 0.3% and 26.6% to $873.8 million and $47.8 million, respectively, in the first quarter as the coronavirus outbreak slowed Indonesian manufacturing and hit the rupiah, pushing down the company's sales and imposing exchange-rate losses.

Investor sentiment was further depressed by the government's decision to cap the price of gas for several industries in April. The plunge in sales is expected to deepen in the second quarter with the price cap in place, and as manufacturing further slowed due to restrictions on movement in Indonesia and around the world.

The aviation industry was hit hard as well, as governments in Asia imposed travel restrictions to stop the coronavirus from spreading.

Cebu Air, the Philippines' largest discount airline, reported a first-quarter net loss of 1.18 billion pesos ($23.7 million) on a 25% drop in revenue to 15.9 billion pesos. The company has more than halved its capital spending to 13 billion pesos from 28 billion pesos and deferred orders of new planes. It is also laying off hundreds of staff as air travel demand dries up.

Thailand's flag carrier, Thai Airways International, barely made it out of the top 10 decliners among Asia300 stocks. The epidemic tipped the company into bankruptcy and forced it to file for rehabilitation under the Bankruptcy Court's supervision.

The Asia300 is Nikkei's exclusive list of the biggest and fastest-growing companies from 11 economies across the region. Index components are based on market capitalization, with consideration also given to growth potential and geographic balance, in order to highlight Southeast Asian economies in particular.