HONG KONG -- It was only a few months ago that David Schwimmer, the chief executive of the London Stock Exchange Group, was lamenting how large, cross-border, stock exchange mergers are so often derailed by political opposition.

"There will continue to be this nationalistic focus on exchanges in particular," he was quoted as saying by Reuters at the FIA International Derivatives Expo in June. "I think it's hard to think about doing big cross-border exchange-type transactions. It just feels challenging for the industry."

While his comments referred to LSEG's multiple failed attempts to merge with Germany's Deutsche Boerse Group, this week Schwimmer was at the receiving end of a bid when Hong Kong Exchanges & Clearing made an unsolicited 29.6 billion pound ($36.5 billion) takeover offer for the London exchange.

Investors, analysts and authorities almost immediately cast doubts over the success of the proposal -- not least because HKEX's largest shareholder is the Hong Kong government, seen by many as a proxy for Beijing. The Hong Kong government also appoints six of the exchange's 13 board members.

The LSEG said this week that it would consider the "highly conditional" proposal and respond in "due course." The Financial Times reported on Thursday that HKEX was prepared to "sweeten the terms" of the bid, but also said that the LSEG was poised to reject the offer. 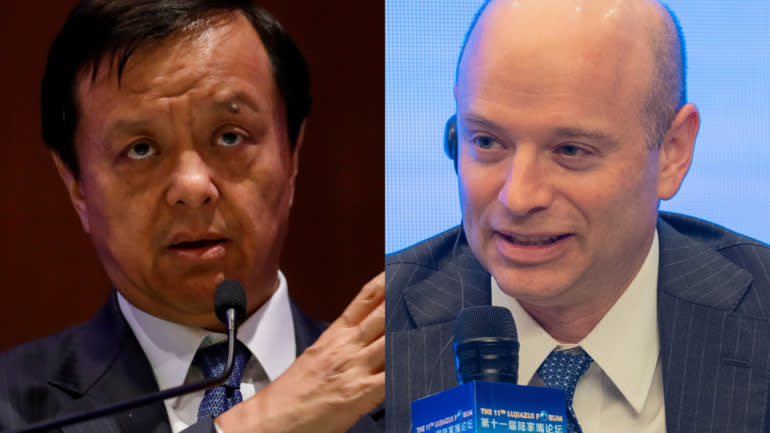 HKEX Chief Executive Charles Li, left, and David Schwimmer, chief executive of the LSEG. Li said this week that he has long "admired" the London exchange. (Source photos by Reuters and Getty images)

The stock reaction was telling, too: After initially rising 16%, LSEG shares pared gains to end just 6% higher at 72.14 pounds on Wednesday. That compares with HKEX's proposal that values LSEG at 83.61 pounds. LSEG's shares rose 0.6% on Thursday to 72.52 pounds.

HKEX's bid is an attempt to create a global trading powerhouse across equities, commodities, derivatives and clearing in the financial centers on two continents. It has stressed on the commercial logic of the deal that is rooted in connecting Chinese investors' vast savings to the rest of the world, saying that a deal would create a globally connected exchange group that serves as an international platform for financial assets denominated in U.S. dollars, euros and yuan.

But Reuters cited a U.K. Treasury spokesman as saying that the LSEG is a "critically important part" of the British financial system, adding that the government and regulators will be looking at the proposed deal's details "closely."

Analysts were also guarded, saying that the political opposition in Britain -- which has historically derailed tie-ups between national exchanges -- was likely to be even more acute this time over concerns of an attempt by China to take control of a globally important financial intermediary. Of equal concern is the security of data and information such institutions hold.

For instance, Huawei Technologies, the world's biggest producer of telecommunications equipment, faces scrutiny in the West over its links with the Chinese government and U.S. accusations of state-sponsored espionage. Washington has called on its allies to stop using Huawei equipment.

While Hong Kong operates under the "one country, two systems" legal framework, there is mounting concerns that China is encroaching on the city's autonomy, underscored by three months of street demonstrations and sometimes violent protests against the governments in Hong Kong and Beijing.

The bid for the LSEG could be viewed as an "indirect takeover" by China, David Blennerhassett, an analyst at Ballingal Investment Advisors, wrote in a note to clients on Smartkarma.

"The transaction will require various regulatory approvals, which will stress-test the world's understanding of Hong Kong's 'one country, two systems' constitution," he said in the note. "It will be politically tough now and in the near-term to get this through various regulatory channels."

To be sure, several exchange merger attempts over the past two decades also have failed. The LSEG first tried to merge with its German counterpart in 2000, with the last attempt failing in 2017 after the European Commission raised concerns over competition. Australia's government in 2011 blocked the Singapore Exchange from buying the Australian Securities Exchange, citing national interest.

Amid these pushbacks, the LSEG instead has focused on smaller transactions, such as buying a majority of British clearing house LCH in 2013 and earlier this year taking a stake in Brussels-based settlement house Euroclear. Last month, it agreed to buy data company Refinitiv for $27 billion, betting on the dominance of financial information and analytics.

It was the Refinitiv deal that spurred HKEX Chief Executive Charles Li to make a move before it was too late to acquire the LSEG, which he says he has long "admired." HKEX's offer is contingent on the LSEG calling off its deal to acquire Refinitiv, but the London exchange said it remains committed to and continues to make good progress on its proposed deal to buy Refinitiv.

In a media call on Wednesday, Li said his company's proposal was fundamentally different from LSEG's plan to acquire Refinitiv and his plan would deliver "superior growth."