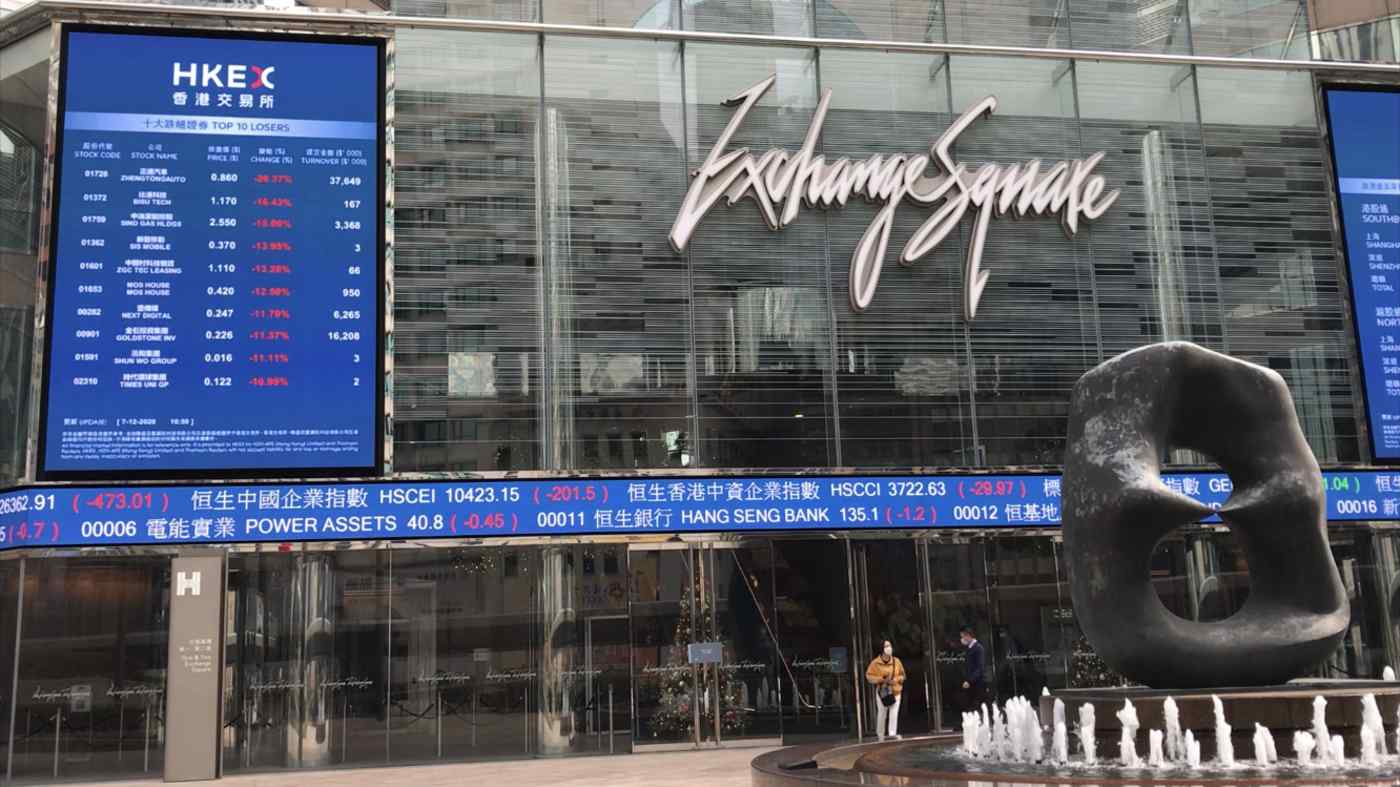 The Hang Seng Index has shed its reliance on financial companies and has tilted toward technology stocks, in line with the growth of mainland tech conglomerates. (Photo by Dean Napolitano)
NARAYANAN SOMASUNDARAM, Nikkei Asia chief banking and financial correspondentDecember 7, 2020 15:56 JST | Hong Kong
CopyCopied

HONG KONG -- A change of lineup in Hong Kong's benchmark stock index on Monday underscores China's increasing clout in the regional financial hub and will give global investors even bigger exposure to the world's largest market.

Swire Pacific, parent of city flag carrier Cathay Pacific Airways and an original component of the Hang Seng Index from its launch in 1969, was removed from the index. As it bade farewell, Chinese food delivery company Meituan, sports equipment maker Anta Sports Products and Budweiser APAC entered the index that tracks the largest and most liquid companies trading in Hong Kong.

The Hang Seng Index was down 1.3% midafternoon in Hong Kong. The index undershot regional peers amid reports the U.S is preparing to sanction additional Chinese officials over Beijing's crackdown on dissent in Hong Kong.

The exit of Swire, one of the most storied colonial-era names in Hong Kong, is symbolic of changes in the city since its handover to China from Britain in 1997. At that time, mainland Chinese companies represented just 5% of the index's weight compared with nearly 60% now.

"It is nothing but a natural evolutionary process and reflects the growth of Hong Kong as a capital market of choice for Chinese companies," said Hao Hong, head of research at BOCOM International. "It paves the way to take part in the economic growth of China."

Swire Pacific, which has ceded more than a third of its value this year, actually has risen 16.5% since the reshuffle was announced Nov. 11, buoyed by optimism that coronavirus vaccines will enable Cathay to restore many of its suspended services.

Meituan declined 1.8% on Monday and has ceded 13% of its value in the last month. Budweiser and Anta have gained 19.5% and 6.2% respectively over the period.

The Hang Seng has increasingly shed its reliance on financial services companies and has tilted toward technology stocks in line with the growth of mainland tech conglomerates. Such companies make up nearly a fourth of the index now, almost double the level from earlier this year. Alibaba Group Holding, which held its secondary listing ceremony in Hong Kong last year, entered the Hang Seng Index this past September and now makes up 5% of the index.   © Reuters

Tencent Holdings, the parent of messaging app WeChat, is the biggest component of the index, with a 10% weighting, according to Hang Seng Indexes.

Alibaba Group Holding, which still has its primary listing in New York, entered the index in September and now makes up 5% of it. Meituan made its debut on Monday with a similar weighting, while smartphone maker Xiaomi, which joined the same time as Alibaba, commands a 3.3% weighting.

Despite the enthusiasm for technology, Hong of BOCOM International warned passive investors to be cautious: valuations of tech stocks have surged this year and could face a correction.

Last month, Alibaba, Tencent, Meituan and JD.com tumbled between 11% and 19% in two consecutive sessions after regulators in Beijing issued draft guidelines to combat anti-competitive practices by big tech companies. Their share prices have since recovered.

The Hang Seng Index is tracked by 23 exchange-listed products with listings on 10 stock exchanges around the world, representing more than $20 billion. It is also tracked by retirement funds in Hong Kong that manage $8 billion. With Monday's change of guard, the number of component stocks in Hang Seng Index increased by two to 52.

Since its return to Beijing's control more than 23 years ago, Hong Kong has modeled itself as a gateway to China at the same time as the country has overtaken Japan as the world's second-largest economy. That has propelled the bustling entrepot to its position as the most important global financial center after New York and London.

Hong Kong, which is now the world's largest equity-raising hub and third-largest dollar trading center, hosts 163 licensed banks and 2,135 asset managers, who use the city as a launchpad to tap vast opportunities in the mainland.

The Stock Connect and Bond Connect programs, which allow foreign investors to buy mainland assets through the Hong Kong Stock Exchange, have played a pivotal role in investors' ratcheting up their ownership of Chinese companies' securities to record levels.

While Chinese companies have been in the ascent, major names such as London-based HSBC Holdings have been losing ground. The biggest lender in the city and the largest foreign bank in China now makes up 7.7% of the index, down from 11.7% in 2015.

Mainland companies make up nearly three-quarters of the market capitalization in Hong Kong, up from a third in 2004, and are responsible for almost 80% of market turnover compared with half from that year.

China's dominance extends beyond representation in the city's stock market -- where Chinese companies have this year accounted for a record 99% of new listings and now make up nearly two-thirds of all listed companies -- to property, businesses, jobs and trade.

Mainland investment and influence in Hong Kong's corporate life is increasing just as entities from other nations reconsider their presence, underscoring the deep-rooted changes taking shape as Beijing moves to diminish the city's political autonomy.

Rising Chinese influence also comes as the number of nonlocal companies with offices in Hong Kong dipped 0.2% to 9,025 as of June compared with a year earlier, according to a recently published annual survey by the Hong Kong government. That marked the first decline since 2009. That decrease expands to 2.8% when mainland companies are excluded.

The foreign departures were particularly stark in the financial sector, with 52 banks and financial companies and 24 insurers leaving the city.