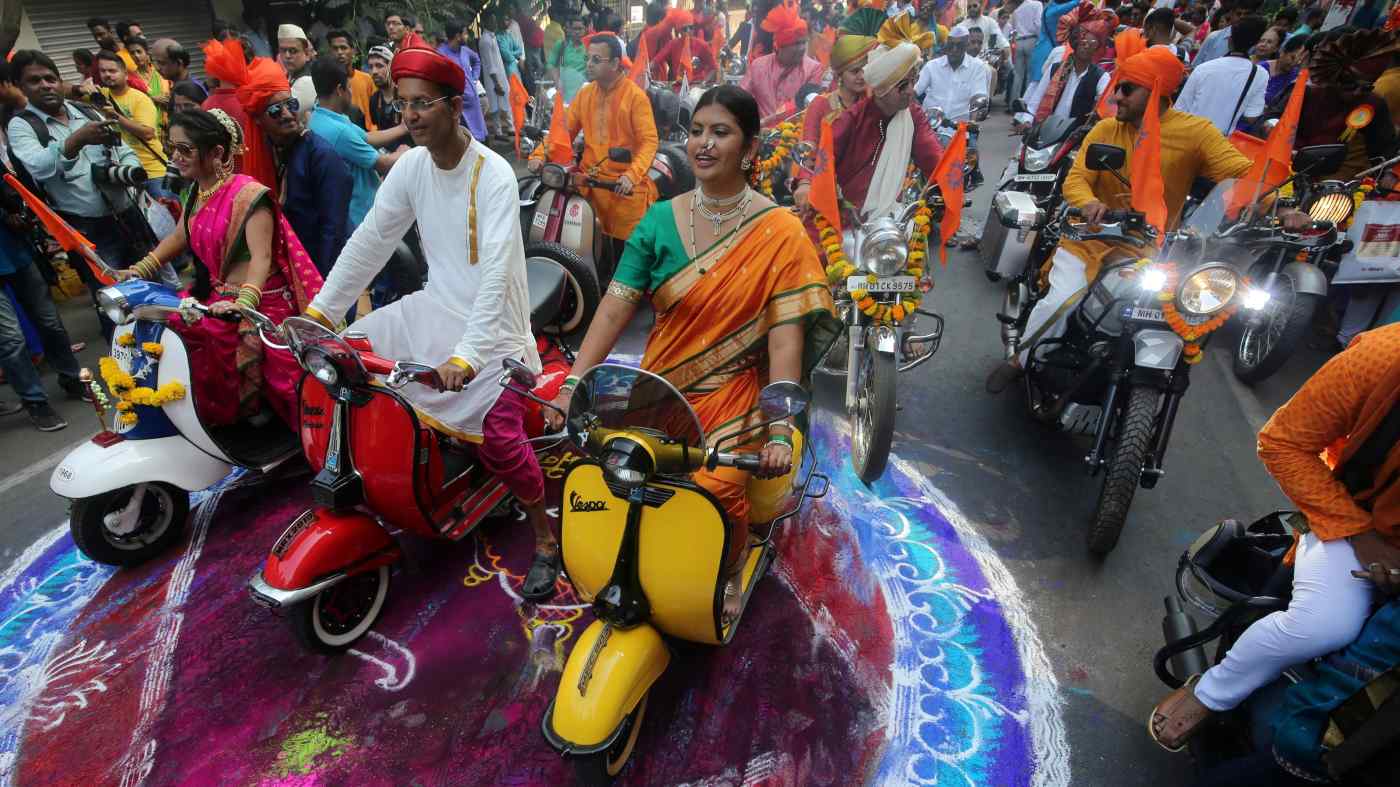 People dressed in traditional costumes ride scooters and motorbikes as they attend celebrations to mark the Gudi Padwa festival, the beginning of the New Year for locals, in Mumbai.   © Reuters
June 24, 2019 21:39 JST | India
CopyCopied

Last week, India's main policy think-tank Niti Aayog recommended that only electric models of scooters and motorcycles with engine capacity of less than 150cc must be sold from 2025. On Friday, Niti Aayog officials met with the heads of Hero MotoCorp, Bajaj Auto, and TVS Motor, among others, and asked them to come back with a transition plan in 15 days, according to a government official present in the meeting.

The move comes as India, the world's third-largest emitter of greenhouse gases, pledges to curb its oil imports and cut emissions amid a worldwide push towards clean energy. In February, the South Asian country approved a plan to spend $1.4 billion to subsidize the sales of electric and hybrid vehicles. India is one of the largest two-wheeler markets in the world, with more than three-fourths of the vehicles sold either scooters and bikes.

However, Niti Aayog's timeline has raised the alarm bells at top two-wheeler makers warned that the think-tank's target may be ambitious and called for immediate attention to infrastructure and costs, the biggest hurdle to EV adoption in India.

The shares later pared the losses with Hero MotoCorp closing down 0.8% and Bajaj losing 2%. TVS Motor closed 0.6% down, while the benchmark S&P BSE Sensex edged down 0.2%.

Rajiv Bajaj, the chairman of Bajaj Auto, said he welcomed electric vehicles and the accompanying fiscal sops to make it happen. However, he cautioned that the current battery cost of $250/kilowatt hour would make it a pricey option for customers.

If electric vehicles were to be affordable, battery costs would have to come down to $100/kWh levels, Bajaj told local newspaper Business Line. Additionally, if battery makers were assured of two million units annually from two-wheeler companies, there would be "enough volumes to justify investments," the report quoted him as saying.

"Any drastic shift to electric vehicles would only increase India's dependence on China as we move away from West Asia, which is our major oil supplier," the report quoted Venu Srinivasan, chairman of TVS Motor, as saying. China produces two-thirds of the world's lithium-ion batteries. Also, the cost of an electric two-wheeler may be 80% more than that of conventional vehicles, he added.

"For now, we need more time to study this subject and plan a transition," Srinivasan said.

Further, the executives warned that the EV rush may pour cold water over the government's planned rollout of Euro VI fuel norms next April as customers may skip purchases, awaiting new electric options.

Earlier this month, Reuters reported that India is planning to make ask ride-hailing services such as Ola and Uber to convert 40% of their fleet to electric cars by 2026.

New Delhi's stance on EV adoption is "a cause of concern," said S.P. Tulsian, an independent investment adviser. "The government seems to be in too much of a hurry to roll out this ban, at least theoretically."

The government push for electrification comes at a time when automotive demand in India is has been cooling for nearly a year, as Asia's third-largest economy faced a credit crunch and distress in rural markets. Credit has tightened partly because of the lending curbs imposed on banks in a bid to reduce their bad loans.

Two-wheeler makers such as Hero MotoCorp and Honda's Indian unit have been slashing production amid the weak demand. According to data from the Federation of Automobile Dealers' Association, the average inventory levels of two-wheeler makers rose to 55 days to 60 days in May from 45 days to 50 days in the previous month.

Registration of two-wheelers fell 8.6% in May, the steepest fall compared with all other automobiles.