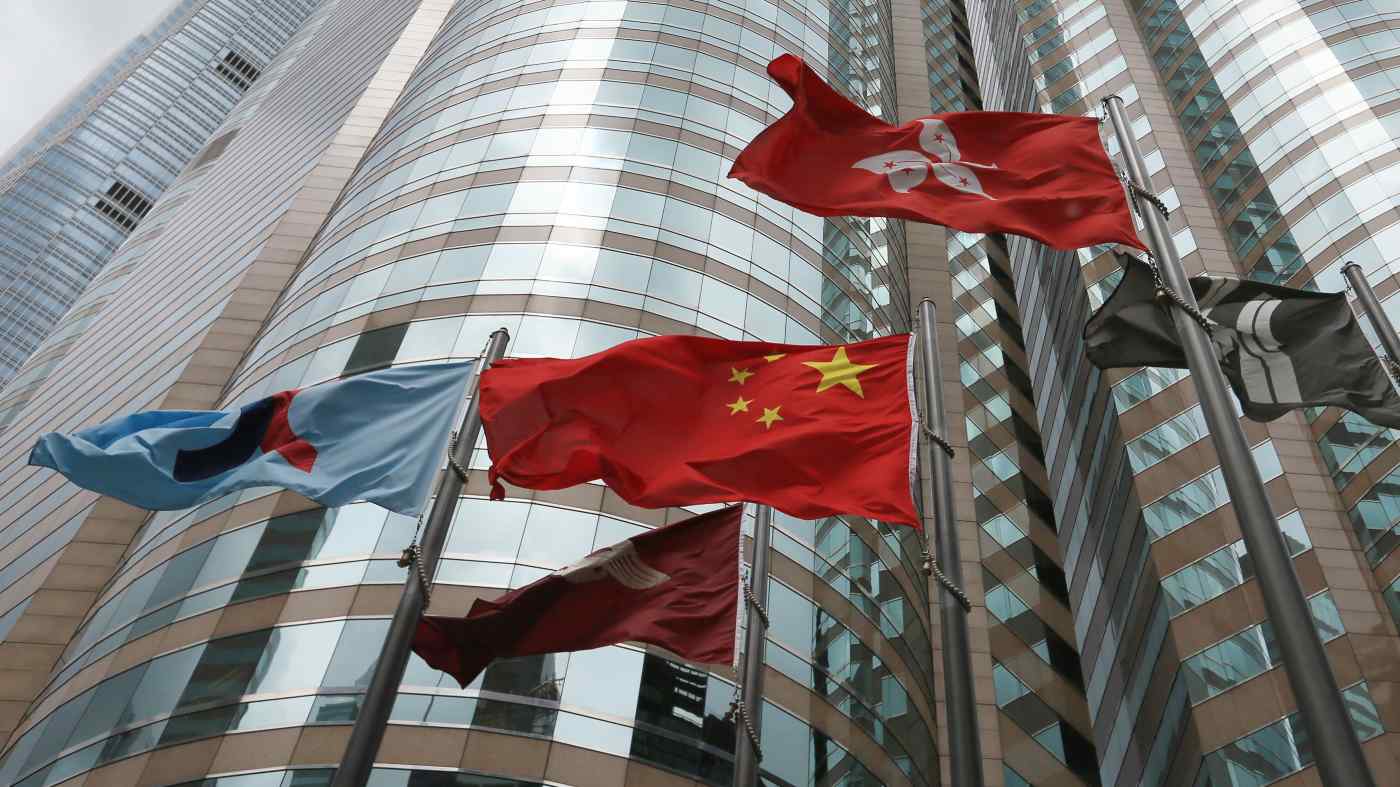 HONG KONG -- After loosening its listing rules to try to draw more high-tech initial public offerings, the Stock Exchange of Hong Kong has now turned its attention to addressing the longstanding problem of near endless trading suspensions.

Unlike a number of its global peers, the Hong Kong market has allowed companies to remain listed but with their shares suspended for trading for years with little consequence. Investors worried about getting trapped in stock positions with little way to exit have long called for Hong Kong Exchanges & Clearing, the market's parent, to bring its practices into line with international standards.

"The delisting rules is good news that finally puts an end to the long-suspended companies instead of them hanging around," said Alex Wong, director of asset management at Ample Capital.

The new rules to accelerate and standardize the delisting of the shares of long-suspended stocks took effect on Aug. 1, and will allow HKEx to delist companies that have suspended trading and are facing financial difficulties, are under investigations or fail to publish financial results.

The exchange has given companies with prolonged share suspensions a grace period for the new rules, which apply to companies on both the main board and the Growth Enterprise Market, or GEM, for small and midsize companies. 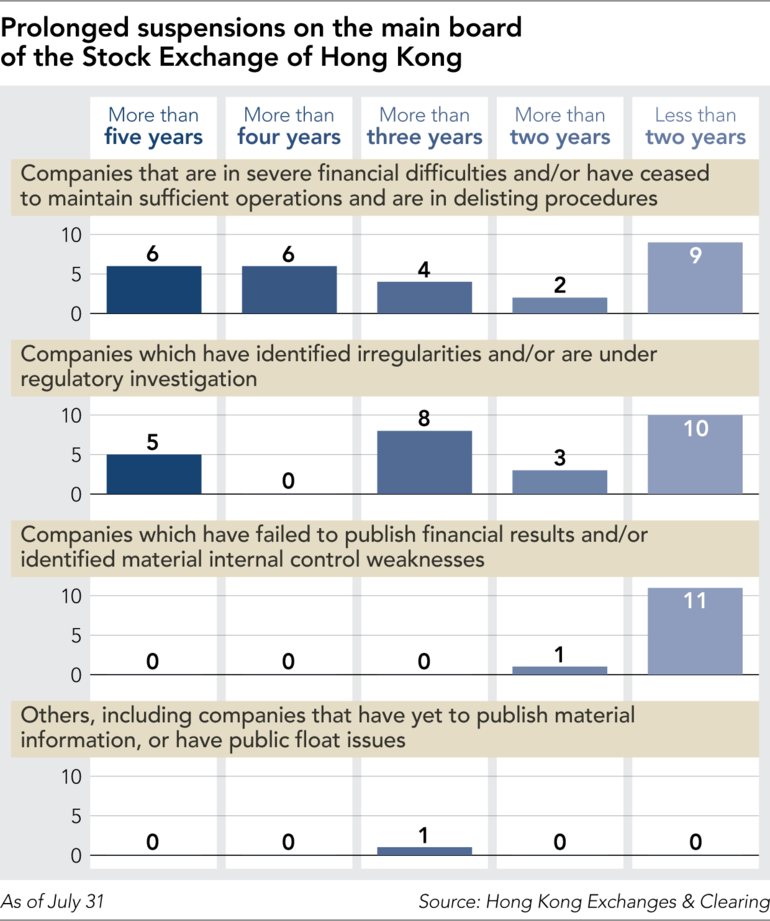 The move by HKEx to clean up the delisting rules was viewed by some as long overdue and removes a black mark on its reputation. When the trading activity of a stock is suspended, shareholders' funds in the stock are frozen, which affects institutional investors and small investors alike.

The Pan Asia Securities Lending Association, a group of companies active in the business of borrowing and lending securities of Asian markets, suggested on the HKEx consultation paper that the suspension period should be limited to three months and stated that a lengthy suspension period is beneficial neither to the company nor the shareholders.

David Graham, chief regulatory officer and head of listing at HKEx, told a forum held in Hong Kong in March by the Securities and Futures Commission that "Hong Kong had a high quality, well-regulated market," according to a summary of his comments.

He noted that the problems with Hong Kong's delisting rules "affected only a small number of companies and had a disproportionate effect on the market's reputation," according the SFC summary.

HKEx has now moved to catch up with delisting standards among other major international stock exchanges. 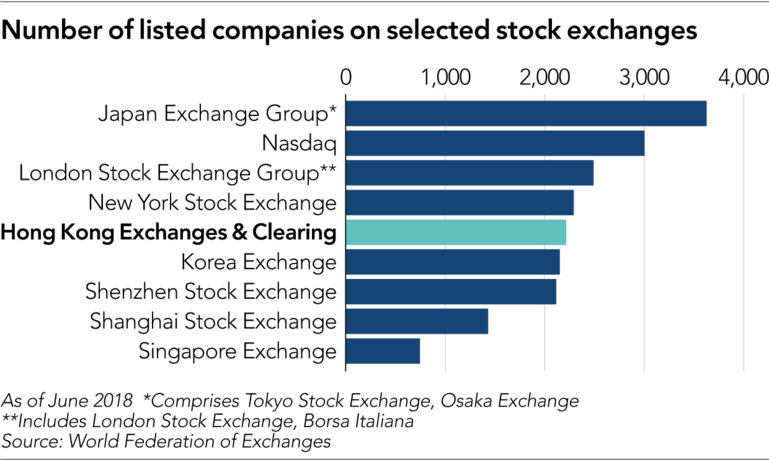 China amended its delisting rules just days before Hong Kong's new rules went into effect. The China Securities Regulatory Commission on July 27 "amended rules on removing companies from domestic stock exchanges, specifying that companies involved in major breaches of the law that threaten public health or security will face compulsory delisting," according to a report by the Xinhua News Agency.

Previously, HKEx appeared to turn a blind eye to companies' shares years-long suspensions. Mandarin Resources was suspended for a record 14 years, from 1986 to 2000. The company has since gone through a few name changes and last year became known as Rich Goldman Holdings.

More recently, shares of Hanergy Thin Film Power Group, a Chinese solar cell manufacturer, have been halted since May 20, 2015, when they lost almost half their value in trading. A week later, the SFC said it was investigating Hanergy's affairs, and two months later the commission ordered the stock exchange to extend the trading suspension.

In a filing with the stock exchange last week, Hanergy took note of the new delisting framework. It said it will continue to work toward fulfilling the "resumption requirements imposed by the SFC" and "seek the resumption of trading in its shares on the stock exchange as soon as possible."

Another company, Daqing Dairy Holdings, which had been suspended for more than six years, resumed trading last month. After the resumption of trading, the company, which previously was a producer of formula milk powder products, acquired a chain of hot pot restaurants in mainland China and was renamed Longhui International Holdings.

But over the past year, HKEx has moved to delist Bel Global Resources Holdings and Zhongda International Holdings over the companies' failure to submit trading resumption proposals. Both companies have filed applications to maintain their listings and their appeals are under review.

"Anything to push that [delisting] process forward and make it more efficient is welcome," he said. "And it is a need in Hong Kong to have a more efficient delisting process."

Sunny Tse contributed to this article.