HONG KONG -- Hong Kong's benchmark stock index is poised to expand to 80 components by the middle of next year and ultimately include 100, in one of the biggest revamps ever of the 52-year-old gauge.

Hang Seng Indexes Co., the compiler of the index and a unit of Hang Seng Bank, said on Monday that the changes will reduce the oversized representation of financials in its main index and raise the profile of technology stocks. It also plans to cap the weighting of individual companies and fast-track inclusion of new listings.

The changes, which were first proposed in December, will start to be implemented in June, Hang Seng Indexes said. It did not specify when it expects the benchmark to reach 100 constituents.

The changes "will further increase its representation and make the index more balanced and diversified," said Anita Mo, chief executive of Hang Seng Indexes, in a statement. "These enhancements will ensure that the index remains the most important benchmark of the Hong Kong stock market."

The Hang Seng Index, which rose 1.6% on Monday, was one of the worst-performing major global indexes last year thanks to its overreliance on financial stocks, which currently make up 44% of the gauge. Tech stocks that drove global equity returns last year now have a 27% weighting. Once considered a proxy for mainland Chinese stocks, the index has diverged benchmarks such as the MSCI China Index, which includes Chinese companies listed in Hong Kong, Shanghai and Shenzhen as well as foreign exchanges such as the Nasdaq Stock Market. Since March 2019, the MSCI China Index has climbed 41%, while the Hang Seng Index is up less than 1%.

Hong Kong in recent years has become a preferred listing venue for Chinese tech companies, including Alibaba Group Holding and JD.com. The changes announced on Monday also come amid record buying of Hong Kong-listed stocks by Chinese investors, who earlier this year helped propel the index past 30,000 points for the first time since May 2019, making it 2021's best-performing major equity index.

The revamp will impact more than 20 exchange-listed products with listings on 10 stock exchanges around the world, as well as retirement funds in Hong Kong that together manage about $30 billion.

While the run-up to the overhaul was overshadowed by a Hong Kong government announcement last week on plans to raise the transaction tax on stock trades from 0.1% to 0.13% beginning Aug. 1 to bridge a record fiscal deficit, traders said the changes should still provide support to the Hang Seng Index. Mainland investors last week were net sellers of Hong Kong stocks for the first time since Dec. 18 as the index dropped 5.2%, its biggest weekly slump in a year.

When the index reaches 80 constituents, the compiler expects the current weighting of financial stocks to drop to 32.8% while tech will increase to 29%. Consumer staples and consumer discretionary shares will rise to 14.2% from 10.4% currently. The number of tech stocks in the index is expected to increase to 10 from four, matching the number of financials, which would drop by one.

"According to our calculations, previous inclusions of tech stocks resulted in the index valuation moving higher," said Cliff Zhao, an analyst with CCB International in Hong Kong. "As weighting shifts from relatively stable financials to more volatile tech stocks, volatility may trend higher."

The revamped index will be made up of seven industry groups, which will be reviewed at least every two years, Hang Seng Indexes said. The minimum listing history requirement for inclusion will be shortened to three months from up to 24 now. 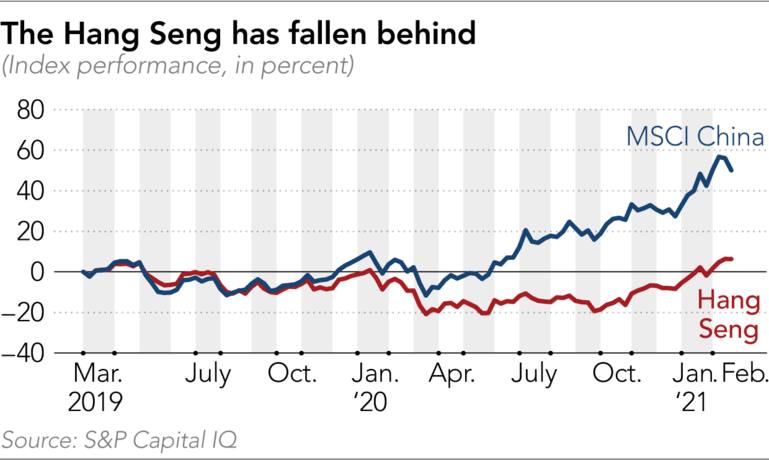 The maximum weighting for a stock will be reduced to 8% from 10% and the index will have between 20 and 25 Hong Kong-based companies. Mainland companies will have a 66.9% index weighting compared with 58% now.

The changes are expected to boost the representativeness of the index. Companies that form part of the index will make up 71.2% of the total capitalization of the Hong Kong stock market, up from 56.5% now, and account for two-thirds of the market turnover versus half currently, according to a simulation by Hang Seng Indexes.

"With the Hong Kong Stock Exchange introducing new listing rules over the past few years to broaden the types of companies that can list, the proposed changes may help represent a wider range of industries that the bourse has to offer," saidRonald Chan, chief investment officer at family office Chartwell Capital and a member of the exchange's listing committee.

The index compiler on Friday, as part of its regular quarterly review, said it would add three companies, including Alibaba Health Information Technology, to its benchmark, taking the number of component stocks to 55 starting on March 15. Membership, which long held at 50, rose to 52 in a November reshuffle.

Since 2018, 37 new-economy companies have taken up spots on the Hong Kong exchange as tensions between Washington and Beijing prompted many to undertake secondary listings in the city. Their combined market value of $1.4 trillion represents a quarter of the Hong Kong market's capitalization, Hang Seng Indexes said.

Their arrival has helped drive listing volumes in the city. Companies have raised $8.4 billion in Hong Kong so far this year, according to Dealogic. That follows a record $52 billion haul in 2020, when Hong Kong lagged only the New York Stock Exchange and Nasdaq globally.

The benchmark index has undergone changes in recent years as the market capitalization of Chinese companies in the city's stock market surged. The most recent overhaul came in September and saw the inclusion of companies with secondary listings, including Alibaba, and tech companies getting greater representation.

The Hang Seng Index debuted in 1969 with 33 constituents. The number rose to 38 in 2007, when it began to include the shares of mainland companies that trade in Hong Kong and expanded to 50 in 2012.